Jaish-e-Mohammed terrorists attacked Sunjwan army camp on the outskirts of Jammu city. 2 soldiers killed and 9 people were injured in the attack

19 of the 26 flats evacuated at Sunjwan army camp

There is no hostage crisis in Sunjwan army camp, ANI reports. The report adds that 19 of the 26 flats have been evacuated so far and the operation continues.

Defence PRO RK Anand said to the press that quick response teams have cordoned off the area in the Sunjwan army camp where the terror attack took place. "They have isolated the militants into a limited area," he said. He added that the operation is still on and due to the presence of families in the area, the operations are being conducted very cautiously to minimize casualties.

Security forces and police have cordoned off the area around the Sunjwan army camp. The camp falls under the first Jammu and Kashmir Light Infantry in 36 Brigade.

Soon after the attack, reinforcements of the army’s special forces and SOG rushed to the spot and cordoned off the whole area amid a fierce gunfight, a security official told PTI.

Intermittent exchange of firing between militants and forces continues. The information about the attack was received by the police at around 5 am on Saturday. The police personnel were rushed in from a local police station that lies three kilometres away from the Sunjwan army camp. Policemen at Chenni police station were taken unawares as they woke up to gunshots.

If Pakistan wants good relations with India, it has to end terrorism, says Farooq Abdullah

Army and security officials is capable of hitting back, says Rajnath Singh

Speaking to reporters, Union home minister Rajnath Singh said: "Till operations are not over, it won't be right for me to make any comments. Our army and security officials are doing their responsibility. They will never let our (country) down."

Attack has been contained, operations still on: Army

Four injured being treated at Government Medical College in Jammu

12:28 (ist)
Names of deceased revealed
Parliamentary Affairs Minister Abdul Rehman Veeri informed the Jammu and Kashmir Assembly that Subedar Maganlal and Subedar Mohammed Ashraf were killed in the attack by a group of militants.
PTI
12:14 (ist)

High alert across Jammu and Kashmir

"Pakistani terrorists have been holed up in a building. They will be eliminated and neutralised," Jammu and Kashmir Deputy CM Nirmal Singh told CNN-News18.

Inspector General of Police (Jammu Range) SD Singh Jamwal said on Saturday: "Around 4.55 am, suspicious movement was noticed by the Santri and his bunker was fired upon, then the fire was retaliated. The number of militants isn't known yet; they've been cornered in one of the family quarters."

Ruckus in Jammu and Kashmir Assembly

A furor erupted in the Jammu and Kashmir assembly after Speaker Kavinder Gupta said the attack took place because Rohingiya Muslims are living close to the camp in Sujwan, Jammu.
Opposition National Conference and Congress members stormed to the Well of the House after Speaker Gupta's remarks.
As the ruckus turned intense, Gupta adjourned the house for 15 minutes.

Four JeM terrorists are holed up inside the Sunjwan army camp. According to India Today, gunfire is going on inside the army camp.

Terrorists holed up in JCO quarters in Sunjwan army camp

Two killed, four people have been injured so far

In the attack that took place at Sunjwan army camp, two people have been killed and four injured, reported The Indian Express.

Authorities on Friday ordered closure of schools in Sunjwan belt of Jammu city in the wake of the terror attack on the army camp. Three to four militants stormed the Army camp at Sunjawan, leaving three persons injured.

"We have ordered closure of schools in Sunjawan area as a precautionary measure in the wake of the terror attack," a senior official told PTI.

One army jawan succumbs to his injuries

Omar Abdullah says Sunjwan attack is disturbing, hopes for no loss to life of security forces

Jammu and Kashmir Assembly Speaker Kavinder Gupta on the attack

The Union minister also directed the Ministry of Home Affairs to look into the matter.

Militants had attacked the same army station in 2006. Twelve soldiers were killed and seven others were injured in that attack before the two 'fidayeen' (suicide) terrorists were killed.

A red alert has been sounded in Jammu city following the attack on the Sunjwan Army camp on Saturday morning. According to India Today, the terrorists entered the camp through a nallah in the backside.

Intelligence inputs had warned an attack on the army or security establishment by Jaish-e-Mohammed in view of the death anniversary of Afsal Guru who was hanged on 9 February 2013.

Schools within 500 metres of Sunjwan army camp to remain closed

Last bullet fired one and a half hours ago, say reports

Police deployed in the area

Suspicious movement observed near camp at 4.55 am

"Around 4:55 am suspicious movement was noticed by the santri. The santri bunker was fired upon and they retaliated. Number of terrorists isn't known. They've been cornered in one of the family quarters. Two have been injured: one Hawaldar and his daughter. Operation is on." Jammu  IGP SD Singh Jamwal told ANI.

The terrorists breached the rear side of the Sunjwan army camp near Chenni in the outskirts of the city during the intervening night, officials said.

The Congress appealed to Prime Minister Narendra Modi to "personally supervise" the operation against the terrorists who attacked an army camp in Jammu.

Fourteen soldiers have been killed in the last 31 days, he said. "We appeal to the prime minister, whichever part of the world he is, to personally supervise the operation and ensure that these terrorists are gunned down and give the armed forces every possible help in this regard," he told reporters. — PTI

Jammu and Kashmir Chief Minister Mehbooba Mufti visited the Army Hospital at Satwari in Jammu this evening and enquired about the condition of those injured in Saturday's militant attack on Sunjwan Army camp.

According to an official spokesperson, the chief minister met all the injured and wished them a speedy recovery. She also interacted with the doctors and enquired about the condition of the injured. She assured all support from the state government in their treatment, the spokesperson was quoted as saying in a statement.

#JammuAndKashmir: Locals provide food and water to security personnel at #SunjwanArmyCamp which was attacked by terrorists earlier today. pic.twitter.com/qo5Xh8PNm3

Jammu and Kashmir Governor NN Vohra expressed concern over the militant attack at Sunjuwan Army Camp in Jammu on Saturday and reiterated his advise about the need for an uncompromising audit of all security establishments.

According to an official spokesperson, the governor spoke to Northern Army Commander Lieutenant General Devraj Anbu and expressed grief over the death of two army personnel, and wished the speedy recovery to those injured in the attack. — PTI 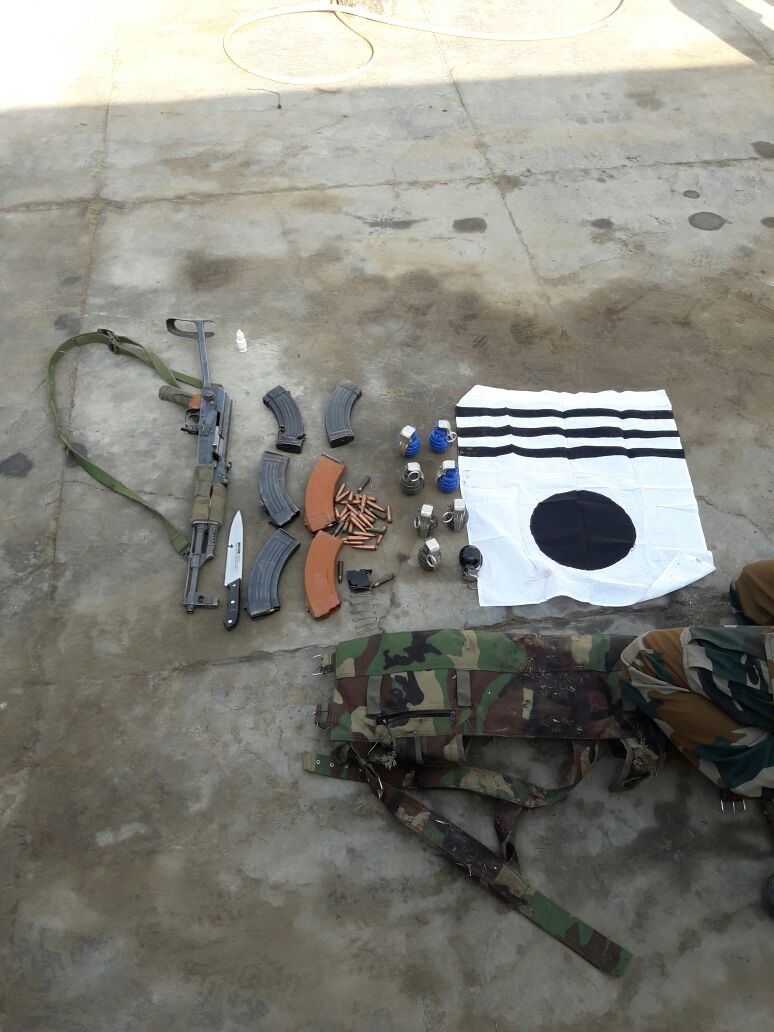 "Anybody who has tried to breach our boundaries has been met with the might of India," says Smriti Irani

"You can change your friends, but you can never change your neighbours. We as a country are a tolerant nation, cognizant of the fact that we live in a delicate environment. We are today confident enough to have a surgical strike and the world speak about our powers," Union minister Smriti Irani said in Mumbai in light of the Sunjuwan army camp terror attack, according to ANI.  "We have forever embraced peace and have never been aggressors but anybody who has tried to breach our boundaries has been met with the might of India," she added.

We have forever embraced peace & have never been aggressors but anybody who has tried to breach our boundaries has been met with the might of India: Union Minister Smriti Irani in Mumbai pic.twitter.com/Zo2znT0ksU

Indian Army releases press note on the operations in Sunjuwan 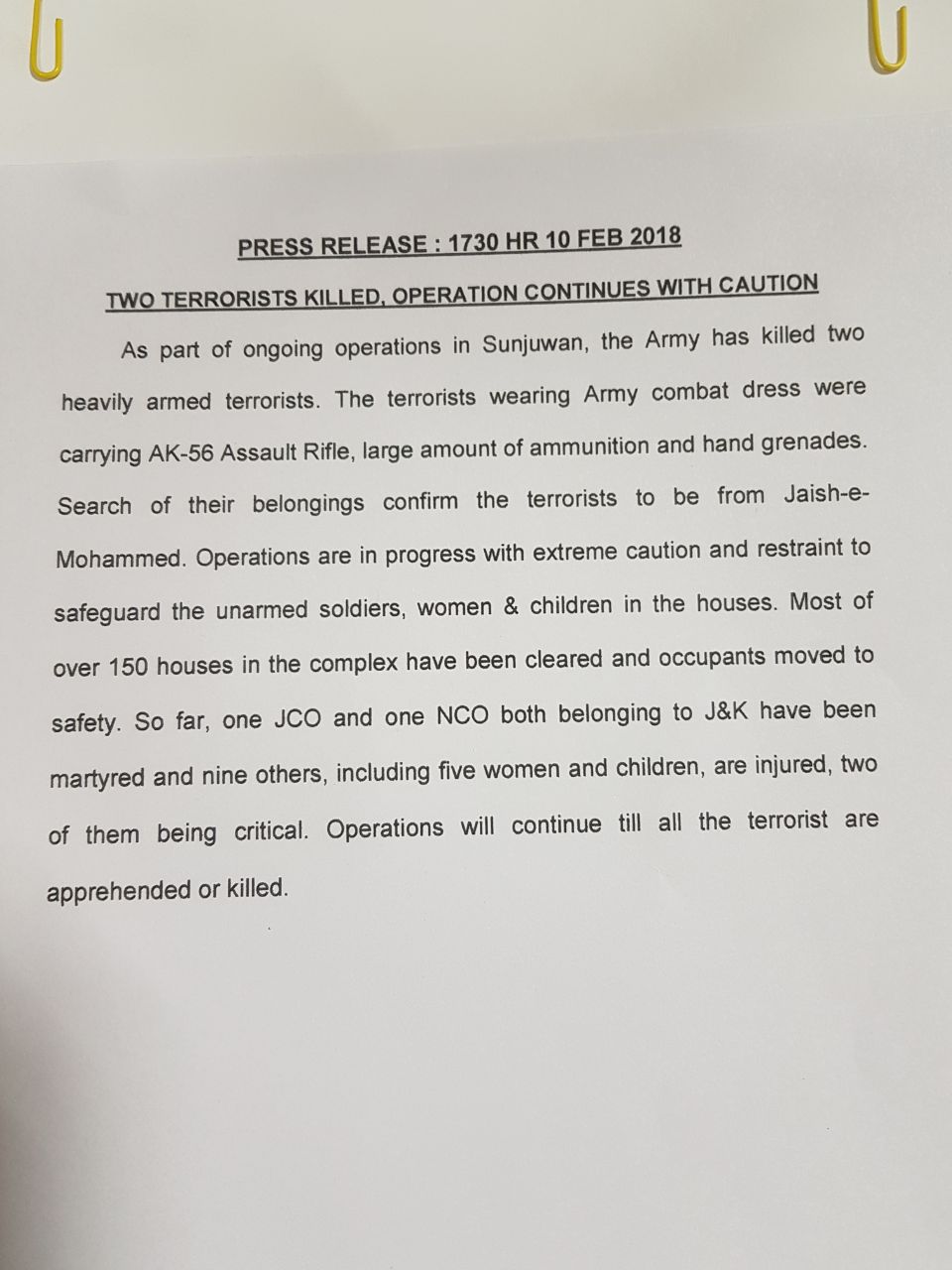 Jaish-e-Mohammed terrorists on Saturday struck at an army camp on the outskirts of Jammu city, killing two junior commissioned officers (JCOs) and injuring six others, including a Major and a daughter of an Army personnel.

Parliamentary Affairs Minister Abdul Rehman Veeri informed the Jammu and Kashmir Assembly that Subedar Madanlal Chowdhary and Subedar Mohammed Ashraf Mir were killed in the attack by a group of militants.

The army, however, maintained that only one JCO was killed. Security personnel stand guard outside the Sunjuwan Army camp during the encounter in Jammu on Saturday. PTI

Briefing media persons at the main entrance of the camp, Jammu-based Army PRO Lieutenant Colonel Devender Anand said, "In the early hours today after a brief exchange of fire with sentry on the periphery, some terrorists entered the family accommodation complex.

"The quick response teams have cordoned off the area and isolated the terrorists, who are holed up in a few houses (inside the camp)," the officer said.

He said in the operation to evacuate families, one JCO was killed while six persons, including women and children, suffered injuries.

"Due to the presence of women and children in the housing colony, the operations is being progressed cautiously to minimise the casualties," he said.

The major has been airlifted to an Udhampur hospital where his condition was stated to be critical, army officials said.

Army helicopters and drones have been pressed into service to ascertain the exact location of the terrorists, officials said.

While there was no action around the main entrance and vehicles were moving along the Jammu-Lakhanpur bypass in front of the camp, Army personnel in bullet-proof vehicles were engaged in the operation to rescue people from the family quarters in the rear side of the base.

A final assault against the holed-up terrorists would be launched once the rescue operation is over, officials said.

Contingents of para-military CRPF and police personnel have been posted outside the boundary wall and were keeping curious onlookers at bay to avoid civilian casualties. Generators and searchlights were brought to the camp, apparently for a night assault.

Though the exact number of militants was not known, officials said preliminary estimates suggested that there could be three to four of them inside the camp.

Inspector General of Police (Jammu) SD Singh Jamwal told reporters in Jammu that "around 4:55 am suspicious movement was noticed by the sentry and his bunker was fired upon. The fire was retaliated. The number of militants is not known. They have been cornered in one of the family quarters."

Soon after the attack, reinforcements of the army's special forces and special operations group (SOG) rushed to the spot and cordoned off the area amid a fierce gunfight, security official said.

Schools in a five-kilometre radius around the camp have been closed by the authorities as a precautionary measure.

Intelligence inputs had warned of an attack on an Army or security establishment by Jaish-e-Mohammed in view of the death anniversary of Afzal Guru who was hanged on 9 February, 2013.

On an average, 60,000 vacancies occur in all three services every year, out of which approximately 50,000 vacancies are for the Army. Due to the suspension of recruitment rallies in the last two years because of the Covid-19 situation, there is a shortfall of 1,08,685 jawans in the Indian Army