As US reports over 400,000 COVID-19 cases, Donald Trump threatens to freeze WHO funding, accuses organsiation of being 'China centric'

Washington: President Donald Trump has threatened to put a "very powerful" hold on US' funding to the World Health Organization, accusing the UN agency of being "very China centric" and criticising it for having "missed the call" in its response to the coronavirus pandemic.

Trump slammed the global health agency for its early guidance aimed at countering the international spread of the coronavirus. 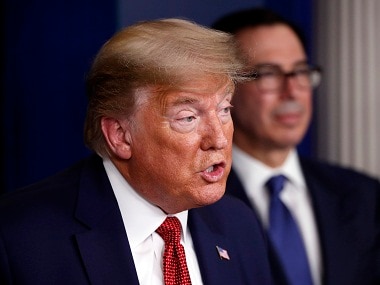 The Geneva-headquartered World Health Organization (WHO), receives vast amounts of money from the United States.

"We pay for a majority or the biggest portion of their money. They actually criticized and disagreed with my travel ban at the time I did it. They were wrong. They've been wrong about a lot of things.

They had a lot of information early and they didn't want to, they're very, they seem to be very China centric," Trump said.

The president said his administration was going to look into the US funding to the WHO.

Meanwhile, Senator Jim Risch, chairman of Senate Foreign Relations Committee, called for an independent investigation into the WHO's handling of the COVID-19 response.

"The WHO has failed not only the American people, it has failed the world with its flagrant mishandling of the response to COVID-19," said Risch.

WHO Director general Tedros Adhanom Ghebreyesus' apparent unwillingness to hold the Chinese Communist Party to even the minimum standard of global health and transparency hindered the world's ability to blunt the spread of this pandemic, he said.

"It is completely unacceptable that the world's global health organization has become a political puppet of the Chinese government," he alleged, adding that "an independent investigation into the WHO's handling of the COVID-19 response is imperative."

The United States is the largest contributor to the WHO. "Our valuable tax payer dollars should go towards investments to prevent the spread of disease, not to aid and abet cover-ups that cost lives and isolate portions of the world's population on political grounds, as has been the case with Taiwan," Senator Risch said.

A bipartisan group of nearly two dozen lawmakers announced Tuesday to introduce a resolution to defund the WHO until Ghebreyesus resigns and an international commission investigates the organisation's role in covering up the Chinese Communist Party's failed COVID-19 response.

"The WHO helped the Chinese Communist Party hide the threat of COVID-19 from the world and now more than 10,000 Americans are dead, a number that is expected to rise dramatically in the coming weeks," Congressman Guy Reschenthaler alleged.

"The United States is the largest contributor to WHO. It is not right that Americans' hard-earned tax dollars are being used to propagate China's lies and hide information that could have saved lives. This bill will hold the WHO accountable for their negligence and deceit," he asserted.

The United States' intelligence community has reported that the Chinese government hid the threat of COVID-19 and, as a result, made it difficult for the rest of the world to respond early, appropriately and aggressively, said Congressman Fred Keller.

"For reasons beyond understanding, the WHO acted as a silent partner in this effort instead of protecting the lives of millions across the world, including hundreds of thousands of American citizens. Our hard-earned tax dollars should not go to a global organization more concerned with not offending the Chinese government than providing accurate information and protecting innocent lives," Keller said.

Senator Marco Rubio accused the Chinese Communist Party of using WHO "to mislead the world."
"The organisation's leadership is either complicit or dangerously incompetent. I will work with the Trump Administration to ensure that WHO is independent and has not been compromised by the CCP before we continue our current funding,” he added.

According to Johns Hopkins University, there are over 1.43 million confirmed coronavirus cases across the world and over 82,000 people have died due to the disease. The US has nearly 400,000 infections, the highest in the world.