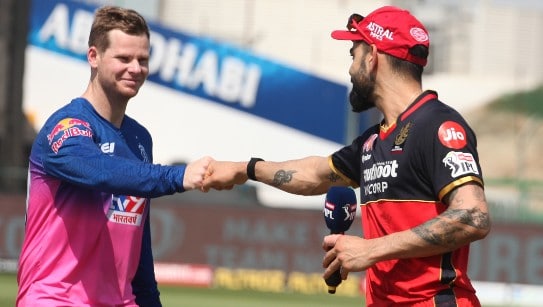 That's it from us here. Do switch over the second match of the day - DC vs CSK - and follow the live scored and updates. Until then, good bye and take care.

Phew! What a chase!

AB de Villiers arrived at the crease with 76 needed off 42 balls and he hit 55 of them from 22 balls with one four and six sixes. All through the innings the RCB batsmen were finding it difficult to get going. Padikkal struggled in the middle, Kohli could manage just one for and two sixes but then AB de Villiers batted on an altogether different wicket and pulled off a stunning win for RCB. That Unadkat 19th over which went for 25 runs was the turning point. May be Smith should have handed the penultimate over to Archer.

This is AB de Villiers’ 12th fifty in 25 balls or less - the joint most in IPL alongside David Warner.

It's full on middle and leg, AB de Villiers swings it over deep mid-wicket for a six to win the match in style. WHAT AN INNINGS and WHAT A PLAYER!

Archer to bowl the last over. 10 needed for RCB!

What an over for RCB! Poor, poor bowling from Unadkat.
After two slower deliveries which are despatched over deep mid-wicket and long on for sixes respectively, Unadkat bowls one short and that too is dispatched for a six over deep square by AB de Villiers. Unadkat then goes very full outside off and AB de Villiers drives it to deep cover for a single. Unadkat then tries to bowl a short bouncer but it goes over the head of Gurkeerat for a wide. Unadkat then bowls another loose one outside off, Gurkeerat slashes it over extra cover for a four. Unadkat ends the over giving away a single. But he gave away 25 runs in that over. 10 runs needed off the last over.

FOUR! Unadkat is getting a proper hammering. Slower and short outside off, Gurkeerat slaps it over cover.

SIX! Three in a row. What superb hitting from RCB. Unadkat drops it short, De Villiers pulls it over deep square leg.

SIXES! AB de Villiers is doing it for RCB. Smashes a slower one from Unadkat over deep mid-wicket and then follows up with a massive six over wide long on for consecutive sixes.

It's full on middle and leg, AB de Villiers swings it over deep mid-wicket for a six to win the match in style. WHAT AN INNINGS and WHAT A PLAYER!

OUT! Kohli is gone! Tewatia in the action again. He pulls off these match-winning moments. This might be one of them. Brilliant catch to send back Kohli. Kohli whips a full delivery powerfully to deep mid-wicket, Tewatis moves to his right, catches the ball, realises that he's lost his balance and going over the rope, pops the ball in the air and comes back inside to complete the catch. What an effort!

OUT! Morris traps Archer LBW! It's an inswinging yorker, right on the money. Archer looks to dig it out but is beaten by the pace and movement in the air. Gets trapped right in front. The umpire lifts his finger. Archer opts for a review but it shows all three reds.

OUT! Brilliant catch from Shahbaz Ahmed. Smith slashes a length delivery outside off from Morris, doesn't get it off the middle. Ahmed at deep point runs to his right and back, dives and pouches an excellent catch. Smith departs for 57 off 36 balls. A very good innings from the captain.

OUT! Morris breaks the stand again. Buttler departs. It's a back of a length delivery outside off, Buttler looks to hammer it over mid off, but doesn't connect it well. It loops in the air, Saini settles under it and pouches it without any fuss. It's a HUGE wicket for RCB at this juncture.

OUT! Two in two for Chahal. It's a typical Chahal delivery. A dangled carrot to Samson. He gives it air and tosses it up wide outside off, Samson is enticed into his shot, he is done in by the flight though. He reaches out for the loft but doesn't connect it well. Helps it straight into the hands of Morris at long off. Chahal is on a hat-trick now.

OUT! Chahal gets the dangerman! Kohli's go-to man has done the job. Gives it a bit of air outside off, Uthappa gets down for a slog sweep, doesn't connect it off the middle and hands it straight into the hands of Finch at deep square leg. Uthappa gone for 41 off 22 balls.

OUT! Morris breaks the opening stand. Stokes will be disappointed with that shot. It's a slower bouncer down the leg side. Stokes goes for a pull but seems to be late on it, gets an edge to the keeper who accepts an easy catch. Stokes departs for 15 off 19 balls.

Well, well, we have a new opening pair again for RR. Robin Uthappa has walked out to bat with Ben Stokes. Jos Buttler isn't opening!

Toss: RR have won the toss and elected to bat.

Pitch report: The ground seems to be very deceptive in terms of the dimensions. It tends to be a bit slower in the day games. JP Duminy says that it looks a very good surface. It's just the second day game on this surface. The spinners will be crucial on this ground. Duminy believes that the spinners need to toss the ball up on this surface.

AB de Villiers arrived at the crease with 76 needed off 42 balls and he hit 55 of them from 22 balls with one four and six sixes. All through the innings the RCB batsmen were finding it difficult to get going. Paddikal struggled in the middle, Kohli could manage just one for and two sixes but then AB de Villiers batted on an altogether different wicket and pulled off a stunning win for RCB. That Unadkat 19th over which went for 25 runs was the turning point. May be Smith should have handed the penultimate over to Archer.

Preview: Royal Challengers Bangalore would aim to bounce back after their eight-wicket loss to Kings XI Punjab when they take on an erratic Rajasthan Royals on Saturday.

RCB have won five of their eight games on the back of all-round performances but blundered tactically against KXIP on Thursday.

On the other hand, the Royals' campaign this season has been marred by numerous top-order collapses, forcing the lower half to pull them across the finish line.

RCB's five wins so far include a Super Over triumph over Mumbai Indians at the Dubai International Cricket Stadium.

The Royals, on the other hand, lie at the seventh spot in the points table with just three wins from eight outings.

Against KXIP in Sharjah, AB De Villiers, who has been in fine form, was sent in to bat at number six with left-hander Washington Sundar (13), a baffling decision by the RCB.

Shivam Dube (23) was promoted up the order to accompany skipper Kohli in the middle. The experiment didn't work as all three batsmen struggled with the South African scoring just two off five balls.

To add to RCB's woes, while defending the total, Kohli decided to save the in-form Sundar for the big-hitting Chris Gayle, who came to bat in the eighth over. That gamble didn't pay off either as the 41-year-old Jamaican smashed the young off-spinner for four sixes.

"We had a chat, a message from outside about left-right combination and we wanted to go with it because they had two leggies. Sometimes things don't come off. We're pretty happy with the decisions we took, but it didn't come off," Kohli said after the match.

Royals boast of a strong batting line-up. But the likes of Steve Smith, and Sanju Samson have failed to score since the two victories in Sharjah at the beginning of the tournament.

Jos Buttler too has been unable to capitalise on his starts, scoring just one half-century in seven innings.

After failing in his first match of the season, Ben Stokes, who has been elevated to the role of an opener, hit 41 before he was run out against the Delhi Capitals.

The inaugural season champions have relied on Rahul Tewatia to rescue them from precarious positions and the all-rounder managed to do that twice against KXIP and Sunrisers Hyderabad respectively. But he failed against the Capitals when yet again the top-order botched an easy run-chase.

Jofra Archer spearheads the Rajasthan bowling unit, along with the spin duo of Tewatia and Shreyas Gopal, who have consistently figured in an XI that has gone through a lot of chopping and changing.