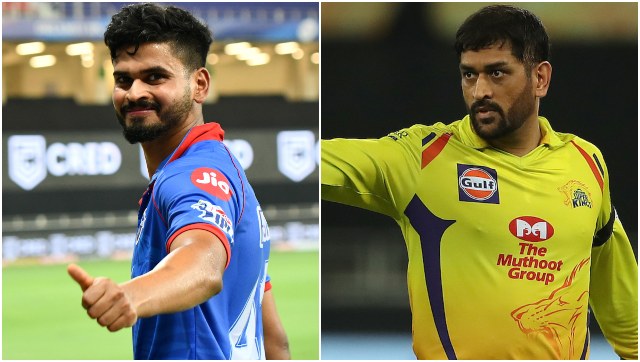 Well that's it from us in our coverage of the Delhi Capitals vs Chennai Super Kings fixture — the second of the Saturday double-header — as Shreyas Iyer and Co complete a season double over the three-time champions, whose chances of making it to the playoffs are increasingly looking impossible now with six losses from nine matches.

Do join us tomorrow in the Sunday double-header as SRH take on KKR in the afternoon fixture, which will take place in Abu Dhabi and will be followed by MI vs KXIP in Dubai. For now, it's time for us to bid you all good night!

Shikhar Dhawan, Man of the Match: It feels really special, it’s my first IPL ton. At first, I wasn’t converting those 30’s into 50’s. I just want to continue the same form and make the most of it. I look to keep my mindset positive and I play with courage. I’m not afraid to get out. Due to the coronavirus, we had many months, so I worked on myself both mentally and physically. I just make sure my fitness is up to the mark and I am an asset for my team

Shreyas Iyer, Delhi Capitals captain: Well I was pretty much nervous. I knew if Shikhar stays on till the end, we will win. (On Dhawan) He’s always there in the dressing room, and he’s always the unsung hero. That guy follows his routine pretty well. You see the gelling (in the team) was really amazing right from the first day of the camp. We know the strengths and weaknesses of our teammates right from the start. Hopefully we’ll try and maintain this till the last game. Today the way he (Dhawan) batted and also the way he converted that into a 100, it was really mesmerising, and as a captain, it gives you breathing space.

CSK captain MS Dhoni: Well Bravo was not fit, so we went ahead with Jadeja (in the last over). Well, I think Shikhar’s wicket was important. He is somebody, if he is on the crease, he will keep the scoreboard ticking. The wicket behaved differently in the first and second innings but credit to Dhawan and the other batters who supported him. I feel this game will give confidence to Sam Curran to execute yorkers outside off.

Jadeja, and not Dwayne Bravo, is bowling the final over, and he starts off with a wide. Dhawan then collects a single off the first legal delivery as he guides the ball towards the leg side. Axar Patel, however, reminds every just how useful he is with the bat in hand as he smashes Jadeja out of the park, collecting three sixes off the next four deliveries to finish the game by himself as Delhi Capitals collect their seventh win of the campaign with five wickets and a delivery to spare!

For Chennai, they’re condemned to their sixth defeat in nine games, and by now the prospect of making it to the playoffs looks very difficult indeed for MS Dhoni and Co!

SIX! Delhi Capitals win by five wickets and move to the top of the IPL 2020 points table! Axar Patel finishes off in style as he smashes the ball out of the park over long on! DC 185/5

SIX! Back-to-back sixes for Axar off Jadeja! Will he finish the game for the Capitals! DC 177/5

Ravi Jadeja's bowling the final over! Dwayne Bravo's off the field at the moment.

SIX! Delhi Capitals win by five wickets and move to the top of the IPL 2020 points table! Axar Patel finishes off in style as he smashes the ball out of the park over long on! DC 185/5

MAIDEN IPL TON FOR SHIKHAR DHAWAN! Gabbar brings up the milestone for the first time in the cash-rich league, consuming 57 balls along the way, and he'll hope to go big in the business end of the chase to convert this into a winning knock. DC 163/5

OUT! Alex Carey's brief stay at the crease comes to an end as he holes out to long on while attempting to clear the fence off a low full toss from Curran. DC 159/5

OUT! Rayudu makes up for the dropped chance earlier in the over as he safely pouches the ball near the midwicket region after Stoinis skies the ball off the fourth delivery of the 16th over. And it's a timeout after the wicket DC 137/4

OUT! Bravo gets the breakthrough for CSK after getting hit for a boundary earlier in the over, as Iyer tries going big over long on, but doesn't quite get the distance even in a ground as small as this one. Safe as houses from Faf near the boundary rope. DC 94/3

40th half-century for Shikhar Dhawan in the Indian Premier League as well as a third one on the trot this year as the left-hander brings up the milestone, having consumed 29 balls so far, with a single in the 10th over. DC 74/2

OUT! Neat work by Curran standing at point after the ball flies straight to him after a well-executed cut by Rahane as Chahar grabs his second powerplay wicket! DC 26/2

OUT! Another duck for Prithvi Shaw as he taps the ball back in the direction of the bowler to give Chahar the early breakthrough! Horrid start for the Delhi Capitals! DC 0/1

Anrich Nortje has been given the responsibility of bowling the final over. Starts off with a slower ball, Rayudu swings but can only manage a single. Jadeja smacks the third and fourth ball for maximums. Both over long on. Such less margin of error here. Three runs off the last two balls. 16 runs off the last over. They finish at 179/4, courtesy Rayudu’s late flourish.

OUT! Nortje strikes. Good comeback after being hit for a six from him. The ball took an edge and carried straight to the wicketkeeper. Dhoni has to depart. Dhoni c Carey b Nortje 3(5)

OUT! Finally, Dhawan doesn’t drop that one. Plessis goes towards long on in search of a boundary and Dhawan completes a fabulous diving catch. Never easy diving forward. Finally, DC have sent Plessis back to the pavilion. du Plessis c Dhawan b Rabada 58(47)

TOSS UPDATE: CSK have won the toss and they will bat first

IPL 2020 LIVE SCORE, Delhi Capitals vs Chennai Super Kings latest updates: Jadeja, and not Dwayne Bravo’s bowling the final over, and he starts off with a wide. Dhawan then collects two off the first legal delivery as he guides the ball towards the leg side. Axar Patel, however, reminds every just how useful he is with the bat in hand as he smashes Jadeja out of the park, collecting three sixes off four deliveries — to finish the game by himself as Delhi Capitals collect their seventh win of the campaign with five wickets and a delivery to spare! For Chennai, they’re condemned to their sixth defeat in nine games, and by now the prospect of making it to the playoffs looks very difficult indeed for MS Dhoni and Co!

They have so far only won three out of eight contests and would need to win at least five from the next eight to have any chance of making it to the playoffs.

It's a tough challenge no doubt but a team comprising of Shane Watson, Faf du Plessis, Dwayne Bravo and Dhoni can never be discounted.

It was Dhoni's astute captaincy that helped CSK beat SRH. Their decision to bowl as many as seven bowlers and to make Sam Curran open the innings paid rich dividends.

Now they face table toppers Delhi Capitals (DC) at Sharjah, a stadium where balls flying out of the ground has become a common spectacle, but the pitch has been slowing down for the last few matches and CSK are expected to continue with three spinners who played against SRH - Piyush Chawla, Karn Sharma and Ravindra Jadeja.

DC's bowling on the other hand has emerged as the best among all the teams in this edition of IPL. They rely equally on their pacers and spinner. South Africa's Kagiso Rabada and Anrich Nortje have been highly impressive and have been ably assisted by R Ashwin and Axar Patel.

DC also boast of terrific batsmen like Prithvi Shaw, Shikhar Dhawan, Ajinkya Rahane, and Marcus Stoinis. However, consistency has been an issue for the batting lot and CSK would be looking to target this weakness.

There's still no confirmation on whether DC captain Shreyas Iyer will play in the match after he injured his shoulder in the last contest against Rajasthan Royals (RR).

Cummins finishes his spell. Good day for him as well. Picked up two key wickets upfront and then removed Rabada on the penultimate ball of his spell. Three wicket for him. Tushar Deshpande, left handed bat, comes to the crease. Delhi Capitals need 63 runs in 6 balls.