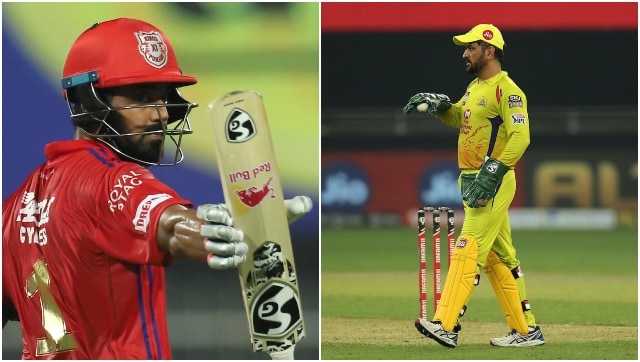 A third consecutive win for CSK and they are not anymore at the eighth spot in the table. KXIP are out of IPL 2020. They started off well with Mayank Agarwal and KL Rahul firing but CSK soon pulled back things with quick wickets. Deepak Hooda got them to a respectable total with a quickfire 62 off 30. But KXIP's bowling had no answers to CSK's reply with Ruturaj Gaikwad shining once again.

That's it from our side. We have another match coming up tonight, KKR taking on RR. You can follow the match here.

CSK win by nine wickets with seven balls to spare. KXIP are out of IPL 2020. They were on the brink of elimination long back, from there on, they fought back with five consecutive wins but the journey is finally over.

If KXIP hoped Shami would help them pull things back, the hopes have been dashed. 11 from the over and only 5 is needed now. There was four leg byes as a short ball hit Ruturaj's helmet and went over Rahul. Ruturaj replied with a front foot pull shot as he got a boundary through midwicket.

FOUR! A confident shot by Ruturaj. A front foot pull shot in front of square as Shami drops it short

FOUR! A snorter by Shami. A well-directed short ball and there was mostly a top-edge from Ruturaj as it flew over Rahul for a boundary

After Ruturaj's fifty, the partnership between him and Rayudu touches the half-century mark. Eight from Jordan's over with a boundary for Rayudu as he threw the kitchen sink on the wide short ball to force it through the empty cover area. The run rate is under six and only 16 is needed from here.

FOUR! Rayudu dances down and stretches his arm to cut the wide delivery through the empty cover area

Bishnoi back into attack. It has been a bad day in the office for the leggie as he gives away 12 runs in the over but Ruturaj is playing another classy innings. He scored two boundaries in the over, both inside-out cover drives as he reaches to his third consecutive fifty. 24 more needed for CSK.

FOUR! FIFTY! Another elegant shot. Another inside-out cover drive but this time from standing at the crease. Ruturaj is showing his class as he completes his third consecutive fifty.

CSK win by nine wickets with seven balls to spare. KXIP are out of IPL 2020. They were on the brink of elimination long back, from there on, they fought back with five consecutive wins but the journey is finally over.

Finally a breakthrough for KXIP. Jordan did really well three by taking the pace off the ball. Faf attempted a scoop shot but didn't get the distance and Rahul ran towards short fine leg and took the catch.

50! Hooda brings up his half-century in just 26 balls. All the more valuable in the context of the game. He’s taken charge and provided KXIP the much-needed flourish.The work’s not fully done yet.

OUT! Tahir traps Gayle LBW. KXIP called for a referral but Gayle got no bat on that one. Big wicket, who will take charge for KXIP today? Gayle lbw b Tahir 12(19)

Out! Third wicket down. Short from Thakur, the ball takes an inside edge off Pooran’s bat and Dhoni completes a simple catch behind the stumps. Pooran c Dhoni b Thakur 2(6)

OUT! KL Rahul departs. Big wicket this. Beautiful change of pace from Ngidi, Rahul tried to target the leg side but the ball rattled his stumps. Rahul b Ngidi 29(27)

OUT! The party poopers have got their first wicket. Short from Ngidi, the ball took an inside edge of Mayank’s bat and rattled the stumps. Unlucky for KXIP! Agarwal b Ngidi 26(15)

IPL 2020 LIVE SCORE, Chennai Super Kings vs Kings XI Punjab latest updates: CSK win by nine wickets with seven balls to spare. KXIP are out of IPL 2020. They were on the brink of elimination long back, from there on, they fought back with five consecutive wins but the journey is finally over.

KXIP's winning run finally came to an end after they were thumped by seven wickets by Rajasthan Royals. After winning just one from seven games, KXIP roared back in style with five wins in a row to stay alive in the tournament. They still need to do a lot of work to make it to the playoffs. Firstly, they need to wipe off the loss in the last match and not let it play on their mind. Momentum is a crucial thing and when it gets broken, you can just derail and get out of track. They need to get their act together and go all out against CSK.

In the five matches prior to the RR loss, KXIP's all-round game stood out. The batsmen delivered and their middle and death overs bowling was excellent. But in the last match, the bowlers suffered a hammering, apart from Ravi Bishnoi, every bowler went for over 20 runs an over.

The bowlers need to bounce back and put in a much better performance against CSK. Early wickets will be the key given that CSK's top order has been performing well.

Another challenge for KXIP would be to stop CSK who have undergone sort of resurgence with two wins in their last two matches. They are out of the tournament now and playing fearless cricket with nothing to lose attitude.

Chris Gayle has breathed life back into this KXIP campaign and he will be the biggest threat to CSK. There will also be a lot of expectations from Glenn Maxwell.

To the relief of all the fans, CSK have started winning matches and are playing with much more verve and energy. They are playing a fearless brand of cricket which was missing in the early part of the campaign. They would like to sign off on a positive note in their last match with an eye on building for the future. They do have some talented youngsters who as showing their mettle. Ruturaj Gaikwad has shown that he is a tough character and can play shots all round the wicket. He would look to carry forward the momentum of two half-centuries (and Man of the Match performances) in two matches in the KXIP match.

Dhoni has faltered in this edition and he will desperately look to sign off on a positive note. Ravindra Jadeja showed that he can be handy with the bat down the order, however, CSK should look to bat him up a bit up the order with the confidence on his side.

Earlier in the tournament when these two teams met, CSK thumped KXIP by 10 wickets as the openers Shane Watson and Faf du Plessis chased down 179 with 14 balls to spare.

With KXIP looking to stay afloat and CSK looking to sign off with a win, we can expect a thriller.