Controversial Islamic preacher Zakir Naik is in Qatar to reportedly deliver speeches during the FIFA World Cup. Banned in India, his organisation, Islamic Research Foundation, has received funding from the Arab country. AFP

The FIFA World Cup 2022 in Qatar continues to court controversy. In the latest, the host country has invited controversial Islamic preacher Zakir Naik, who is banned in India, to give sermons during the sporting event.

“Preacher Sheikh Zakir Naik is present in Qatar during the World Cup and will give many religious lectures throughout the tournament,” tweeted Faisal Alhajri, a presenter at the Qatari state-owned sports channel Alkass.

The information was confirmed by TV presenter Zain Khan who called Naik “one of the most popular Islamic scholars of our time”.

One of the most popular Islamic Scholars of our time Dr Zakir Naik has reached #Qatar for the #FIFAWorldCup !#Qatar2022 pic.twitter.com/WJWCXascSj

In India, Naik remains a fugitive. Here’s a look at his many controversies and why he is wanted in the country.

Also read: Orwellian doublethink: Why West has no moral right to lecture Qatar despite its jihadi connections

Who is Zakir Naik?

An Indian Islamic televangelist and preacher, Zakir Naik is a non-Arabic public orator and proponent of the hardline Salafi school of thought in Sunni Islam. He is the founder and president of the Islamic Research Foundation (IRF) and the Peace TV Network. While he is known for his radical sermons, he also holds a degree in medicine.

Naik has been accused of giving hate speeches and has been banned in India. His supporters dub him an expert on comparative religion.

The radical evangelist became popular in the 1990s for his attempts to convert people to Islam through IRF, his Mumbai-based organisation. In the early 2000s, his videos grabbed attention as they tried to establish Islam as a religion superior to others, according to a report in India Today.

As he became famous, Naik went on the launch Peace TV English, which was based in Dubai, and other versions in Urdu and Bangla. However, they have been banned in several countries like India, Canada, Bangladesh, Sri Lanka, and the United Kingdom for allegedly spreading hate speech.

While his YouTube channel is restricted in India, his Facebook page which is verified, has 22.8 million followers from across the world. 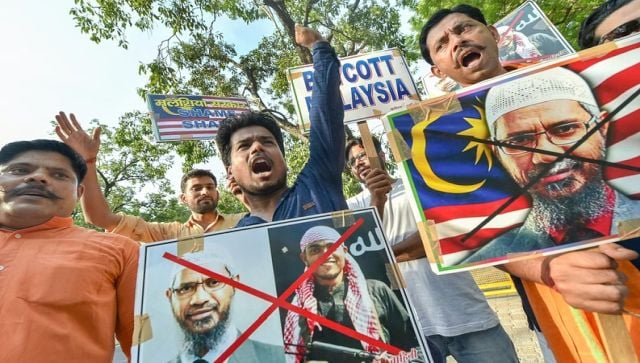 Zakir Naik fled India in 2016 and is now living in Malaysia. The Indian government's attempts to extradite him have been futile, leading to protests in the country. PTI

Why is he such a controversial figure?

It’s not only India, Naik is unwelcome in several countries, especially after he expressed support for Al Qaeda and its now-slain leader Osama bin Laden.

“If bin Laden is fighting the enemies of Islam, I am for him. If he is terrorising America, the biggest terrorist, I am with him. Every Muslim should be a terrorist,” he reportedly said, according to media reports but has claimed that he was misquoted.

His controversial comments on homosexuality have also hit headlines. He has said that homosexuals and those converting from Islam to another religion should be sentenced to death. The preacher has endorsed domestic violence saying that men have the “right” to beat up their wives “gently”.

Apart from Al Qaeda, he has also shown his support for the Islamic State – lauding the destruction of non-Muslim religious places and the practice of keeping sex slaves, according to the India Today report.

He is banned in the UK for calling for the forced conversion of youth to Islam, supporting suicide bombings, and publishing offensive comments that are insulting to other religions, including Hindus and Hindu Gods. Zakir Naik's name has come up in several terror-related activities linked to the Islamic State. PTI

Why is he wanted in India?

Naik has caused more damage to India and other nations than just spewing hate. He faces money laundering charges and is accused of acquiring $28 million worth of criminal assets to buy property in India and finance events where he made “provocative speeches,” a claim he denies, reports Deutsche Welle.

He has been linked to terror-related activities. Two youths from Kerala who joined the Islamic State said they did so after meeting the preacher. He, however, has said that he had no role to play.

The alleged bombers who carried out an explosion in a café in Bangladesh’s Dhaka in July 2016, which killed 22, said they were admirers of Naik. While Islamic State took responsibility for the strike, one of the bombers told investigators that he watched Naik’s preachings on YouTube.

After his name came up in the blast, Naik fled the country in 2016 and since then has not returned. He currently resides in Malaysia.

On 17 November 2016, the IRF was declared an unlawful organisation in India under the Unlawful Activities (Prevention) Act. The ban was extended for five more years last year. According to the MHA notification, Naik’s talks were objectionable since he had been praising known terrorists.

According to a report by ANI, the Solicitor General of India had submitted before the anti-terror tribunal abundant evidence that Naik is still reaching out to his followers in India by disseminating his teachings through videos and giving provocative speeches and lectures that are shared via various social media platforms.

According to the Ministry of Home Affairs, trustees of the IRF, particularly Zakir Naik, travel to Gulf nations to raise money. The foundation has established other trusts, NGOs, and shell companies, all of which are being used for radicalising people, especially Muslim youth.

“These activities constitute a form of symbolic yet manifested invasion through the deliberate perpetuation of hate in the community done by IRF and its office bearers. Therefore, the aforesaid material shows that there exists sufficient cause to hold IRF an unlawful association,” the notification had added.

Investigation into the Delhi riots revealed that one of the accused, Kahlid Saifi, met Naik abroad and sought his support for “spreading his agenda”. Earlier this year, it was alleged that IIT graduate Murtaza Ahmed Abbasi, who attacked two constables with a sharp-edged weapon outside the Gorakhnath temple in Uttar Pradesh, used to watch videos by Naik. The suspect too had links with the Islamic State.

What steps is India taking against Naik?

In May 2020, India requested the extradition of Naik, who is living in exile in Malaysia and has a permanent residency there. However, he has been banned from giving speeches in the country in the interest of “national security”.

Malaysia has not agreed to hand over Naik to Indian authorities. “Naik is seen as an important religious preacher to the conservative Malay electorate – which comprises a large portion of the current Perikatan Nasional coalition’s vote-base. Agreeing to extradite Naik risks eroding that base,” Chye Shu Wen, an analyst at the London-based political consultancy Control Risks told Deutsche Welle.

What is the Qatar connection?

According to the report, after moving to Malaysia, Naik received funding for IRF from Islamic countries like Qatar, Turkey and Pakistan.

Now amid the controversial World Cup, the preacher has flown to Qatar. His presence in the nation is expected to ruffle feathers.

After Nupur Sharma’s controversial remarks on Prophet Mohammad, Doha raised objections. However, the ruling Bharatiya Janata Party (BJP) has suspended the leader from her post.

The European parliament cited the IRGC's 'terrorist activity, repression of protesters and supply of drones to Russia' in its blacklisting call