Shashi Tharoor was among the group of 23 leaders who had written to Sonia Gandhi in 2020 demanding organisational overhaul. PTI

The 17 October polls for the post of Congress chief is turning out to be a head spinner.

The upcoming polls could see a non-Gandhi president for the first time in 20 years, as it is reported that it will be Thiruvananthapuram MP Shashi Tharoor against Rajasthan Chief Minister Ashok Gehlot.

This new development comes after Tharoor met with Congress chief Sonia Gandhi on Monday — who returned from abroad on Friday. While he didn’t reveal details of his meeting with the party chief, it is said that she conveyed that she would stay “neutral” in the elections and that she welcomed the idea of more people contesting the polls and dispelled the notion that there would be an “official candidate”.

Sonia Gandhi, Congress interim president, replied that he (Shashi Tharoor) can contest (for the post of the party president) if he wants, anybody can contest elections: Sources https://t.co/BV53ZXrSHz

All the buzz is happening just three days before the nomination for the post begins.

The former diplomat and member of the Congress G-23 grouping, Tharoor has emerged as a candidate for the top post after he met Sonia on Monday and “discussed” his intentions to contest the polls.

Sources said Tharoor deliberated the matter with Sonia Gandhi to gauge her mind and convey “his intention to contest”.

The Hindu reports that during their 40-minute meeting on Monday, Gandhi told Tharoor that competition for the party president’s post was a positive thing and would bring rich dividends. The Congress chief did not dissuade the Kerala MP from throwing his hat in the ring.

“Anybody who wants to contest is free and welcome to do so. This has been the consistent position of the Congress president and Rahul Gandhi. This is an open, democratic and transparent process. Nobody needs anybody’s nod to contest,” Congress’ communication head Jairam Ramesh told The Hindu in response to reports that Tharoor had sought a go-ahead from Gandhi.

Tharoor’s inclination to contest became evident on Monday morning when he endorsed a petition by a group of young Congress members, seeking constructive reforms in the party.

I welcome this petition that is being circulated by a group of young @INCIndia members, seeking constructive reforms in the Party. It has gathered over 650 signatures so far. I am happy to endorse it & to go beyond it. https://t.co/2yPViCDv0v pic.twitter.com/waGb2kdbTu

The petition that Tharoor supported urged presidential candidates to “undertake a public pledge to involve party members from Block Committees to the Congress Working Committee and implement the Udaipur Declaration in its entirety within the first 100 days of assuming office”.

This isn’t the first time that Tharoor’s name has cropped up as candidate for the top post. When asked earlier this month about the possibility of him running for the position, he had said to PTI, “I have only welcomed the fact that an election will be held. I believe that is very good for the party."

“Of course it is gratifying that this general statement of democratic principle has immediately led to large numbers of people around the country welcoming the prospect of my contesting. But as I have made it clear, I have not declared my candidacy,” Tharoor had said.

“I hope many will contest in order to give the membership a wide choice. So far I have neither ruled myself in nor ruled myself out,” the former Union minister had asserted.

Also read: Rahul again? Will Congress get a non-Gandhi president? The possibilities explained

Ashok Gehlot in the running

Earlier, it had been reported that Gandhi loyalist and present Rajasthan Chief Minister Ashok Gehlot was a possible candidate for the elections.

In August, it was reported that Sonia had met the 73-year-old leader and apparently asked him to ‘take up’ the party leadership post. Gehlot emerged as a preferable choice because he has been a trusted lieutenant of the Gandhis and has immense political experience and could be acceptable to the old guard and new.

However, at the time, Gehlot denied these claims, saying that the top Congress brass had allocated him duties and he is not compromising on them in Rajasthan.

I'm hearing this from the media. I don't know about this. I'm fulfilling duties that have been assigned to me: Rajasthan CM and Congress leader Ashok Gehlot on reports that he has been offered Congress president post by party's interim president Sonia Gandhi pic.twitter.com/dxbJdKvf6r

Sources have said to the Indian Express that Gehlot has appeared reluctant to take on the responsibility and has been “trying to persuade” Rahul to contest rather than his own nomination.

In fact on Saturday, Rajasthan Congress passed a resolution stating that Rahul Gandhi should be made the party’s president.

#WATCH | Resolution passed that everyone will abide by whatever the national president decides on, incl appointment of state presidents. Another resolution moved by CM (Ashok Gehlot) to appoint Rahul Gandhi as party president has also been passed: Rajasthan Min PS Khachariyawas pic.twitter.com/5cVITihKOy 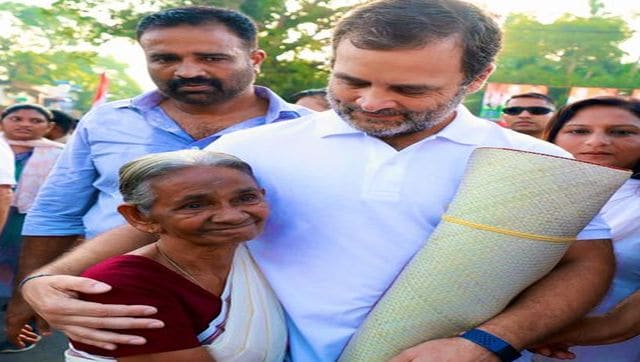 Rahul Gandhi, who is currently on the Bharat Jodo Yatra, has refused to take up the post of Congress president on several occasions. Image Courtesy: @officeofRG/Twitter

Rahul isn’t out of the picture

Even as the buzz over the possibility of having a non-Gandhi for Congress president emerged, Rahul Gandhi’s presence looms over the elections.

The younger Gandhi has refused to take up the post on several occasions. His step down came after the 2019 polls, the year Congress saw a major downfall amid Prime Minister Narendra Modi’s massive win.

The ‘Make Rahul Gandhi AICC president again’ chorus is growing louder in the Congress with half a dozen state units so far seeking his elevation to the top post.

After Rajasthan, Chhattisgarh and Gujarat units of the Congress urged that Gandhi be made the party chief, the Tamil Nadu, Maharashtra and Bihar units also passed resolutions on Monday.

The calls for Rahul as president began with Rajasthan and Chhattisgarh, the only two states where the party is in government on its own. Then, on Sunday, the Gujarat unit also demanded that he be made the party’s president.

On Monday, the Tamil Nadu Congress Committee followed suit and adopted a unanimous resolution urging Rahul Gandhi to lead the party “for the victory of secular, democratic forces” in the 2024 Lok Sabha election.

PM Modi takes dig at Rahul Gandhi, says those dethroned taking out yatra to get back to power

Addressing a gathering in Surendranagar town of poll-bound Gujarat, Modi also said some people abuse Gujarat even after eating salt manufactured in the state