The Congress party may be poised for a shake-up courtesy of its loquacious leader Shashi Tharoor.

On Monday, amid a building buzz that he may run for Congress president in the upcoming 25 September polls, Tharoor met party’s interim chief Sonia Gandhi at her residence.

This comes on the same day that Tharoor endorsed what he said was a petition by a group of young party members seeking reforms and a pledge by AICC president candidates to implement the Udaipur Declaration in entirety, if elected.

The petition shared by Tharoor on Twitter sought reforms and a pledge by AICC president candidates to implement the Udaipur Declaration in entirety, if elected. The former Union minister said it had been signed by over 650 people so far.

“I welcome this petition that is being circulated by a group of young @INCIndia members, seeking constructive reforms in the Party. It has gathered over 650 signatures so far. I am happy to endorse it & to go beyond it,” Tharoor tweeted with screenshots of the petition.

Let’s take a closer look at Tharoor’s possible run, how he has played coy about the possibility of doing so in the past as well as questions about Ashok Gehlot and Rahul Gandhi possibly contesting:

While Tharoor did not disclose what transpired between the meeting with Sonia, sources told ANI he got the nod from her to run.

Tharoor, during the meeting, expressed his wish to contest the elections scheduled to be held to “make internal democracy” in the party stronger.

Sonia responded by giving her nod to the Thiruvananthapuram MP and saying that anybody can contest elections. Sources further claimed Sonia indicated she would ‘stay neutral’ in the upcoming polls, as per Indian Express.

Some leaders who spoke with Tharoor told the newspaper Sonia assured she would not endorse or back any candidate, and that there will be no official or establishment nominee. The impression Tharoor got is that she was in favour of “a free and fair election” and believed that the party would be strengthened by this, a leader told the newspaper.

It was Tharoor’s article in a Malayalam paper on the necessity of an election in the party that triggered off the buzz, as per Hindustan Times.

As per the report, Tharoor earlier said he supported the idea of another person assuming the top post as the Gandhi family members have declared they would not contest the polls. “So let many candidates come forward and participate in the election in the democratically functioning party. That is good for the party,” he was quoted as saying by the newspaper.

“Why not another person come to the post of the Congress president? There are lakhs of members in the party. Let’s see,” he said.

Asked about the possibility of him running for the post of the Congress president, Tharoor earlier this month played it coy.

“I have only welcomed the fact that an election will be held. I believe that is very good for the party,” he told PTI.

“Of course it is gratifying that this general statement of democratic principle has immediately led to large numbers of people around the country welcoming the prospect of my contesting. But as I have made it clear, I have not declared my candidacy,” Tharoor had said.

“I hope many will contest in order to give the membership a wide choice. So far I have neither ruled myself in nor ruled myself out,” the former Union minister had asserted.

Will G23 help or hurt Tharoor?

Notably, Tharoor is one of the signatories of a letter written to Sonia Gandhi by the G-23 group (seeking reforms in the party).

As per News18, Tharoor and party colleague and G-23 member Manish Tewari had raised objections to the party not making public the names of electors for the party president polls.

They argued the list must be published on the All India Congress Committee website for a “free and fair” process. Tharoor and Tewari agreed everybody should know who can nominate candidates and who can vote, as per the report.

Pundits say Tharoor’s association with the G-23 leaders might handicap his chances of becoming the Congress chief, as per the report.

Sagarika Ghose, writing in The Times of India, notes that Congress watchers will pooh-pooh Tharoor’s chances.

“He’s not a favourite of the Congress ‘establishment’ since he is identified with the ‘dissident’ G 23 group. He is not exactly a grassroots organisation man nor a battle-hardened neta from the politically crucial Hindi belt.”

Yet Tharoor could be just the kind of disruptive leadership change the Congress needs to break the status quo, she argues.

What about Gehlot and Rahul?

However, despite Sonia’s assurances, the Gandhis may already have a couple of establishment candidates in mind.

In August, Sonia in a meeting with Ashok Gehlot requested the Congress stalwart to take over leadership of the party before heading abroad. 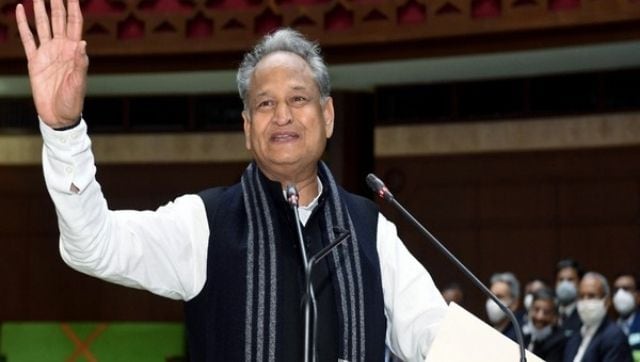 While Sonia seems to want to place her trust in Gehlot, the man himself appears reticent for a variety of reasons.

Meanwhile, the  Rahul Gandhi question lingers as several state party units have passed resolutions asking him to take over as party chief.

Some G-23 leaders believe resolutions backing Rahul are being passed by the PCCs at the behest of the leadership to prepare the ground for him to “change his mind”, as per Indian Express.

This, even as insiders say Rahul continues to stick with his stance that he will not be AICC president.

As per India Today, Rahul is adamant that he is not interested in any post in particular and only wants to work for the party. Tharoor in the past had said as per News18, “Many Congress supporters have been dismayed by Rahul Gandhi’s refusal to contest and his statement that no member from the Gandhi family should replace him. It is really for the Gandhi family to decide where they collectively stand on the issue, but in a democracy, no party should put itself in the position of believing that only one family can lead it.”

The process for filing nominations for the Congress presidential election will be held from 24 to 30 September. The last date for withdrawal of nominations is 8 October and the election, if required, will be held on 17 October. The results will be out on 19 October.

The BJP’s sweeping victory in Gujarat is made even more impressive by the fact that it won 17 of 19 Assembly seats with a significant Muslim population. While some thought the AIMIM would play spoiler for the AAP and Congress, the party made little to no impact