In a moving funeral service, the royal family and world leaders paid their last respects to Queen Elizabeth II. King Charles welled up several times, the Piper who woke up the monarch daily played ‘Sleep Dearie Sleep’, and her great-grandchildren did their bit

Camilla, the Queen Consort, Prince George, Princess Charlotte, Kate, Princess of Wales, and Meghan, Duchess of Sussex, walk after a service at Westminster Abbey on the day of the state funeral and burial of Britain's Queen Elizabeth in London. George and Charlotte were among the youngest mourners. AP

Many a heartbreaking scene unfolded in London, as Britain bid a final farewell to its longest-reigning monarch, Queen Elizabeth II. The sombre funeral proceedings were held at the Westminster Abbey, where the Queen was coronated and got married. It’s from here that she began her final journey on Monday before being lowered into the Royal Vault, where she is laid to rest with her husband Prince Philip.

We look at the most touching scenes from the inimitable ceremony.

The King and princes shed tears

A teary-eyed Kings Charles III and the visibly grief-stricken royal family surrounded the Queen’s coffin at the funeral. His eyes welled up at different points during the service.

Prince Andrew, said to be the Queen’s favourite son, was seen weeping as he arrived at Westminster Abbey. The monarch’s third eldest son was seen in a solemn procession from Westminster Hall to the Abbey. The Duke of York, who appeared to be holding back tears as he walked, played a central role in the Queen’s funeral as the royal family put on a united front during the period of national mourning. 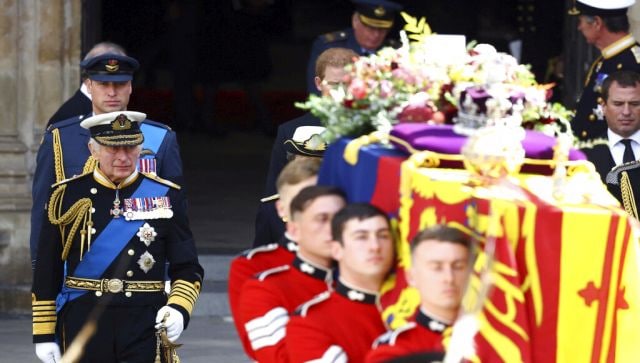 King Charles III and Prince William follow the coffin as they attend the state funeral of Queen Elizabeth II. Her coffin is carried to Windsor Castle, where she will be buried. AP

Andrew’s brother Prince Edward, the Earl of Wessex, too was spotted wiping away tears during the funeral service. As the Queen’s youngest son, Prince Edward, sat in the Abbey for the service, video footage shows that he shed a few tears, using a tissue to wipe his eyes and nose, reports Independent.

Prince Harry’s wife Meghan Markle appeared to wipe away a tear as the Queen’s coffin was carried out of Westminster Abbey. The Duchess of Sussex dabbed her cheek during the emotional moment as she stood beside Camilla, the Queen Consort, Kate, the Duchess of Cambridge, and her children, Prince George and Princess Charlotte, reports Daily Mail.

George and Charlotte say their goodbyes

Queen Elizabeth II’s great-grandchildren George and Charlotte attended her funeral Monday, signalling the more prominent role they will now play as the children of the first-in-line for the throne.

George, now second in line to the throne, wore a dark suit and tie while Charlotte wore a black dress and hat. Their younger brother Louis, four, did not take part.

The children were attentively looking at the order of service, seated with their mother and father, and following the coffin out of the cathedral.

While the children are much younger, the scene evoked memories of William and his brother Harry walking behind the coffin of their mother Diana, Princess of Wales, in 1997, when they were aged 15 and 12 respectively.

George and Charlotte were the youngest mourners following the Queen’s coffin as they marched through a nave packed with world leaders. Their role in the ceremony only emerged on Sunday, reports The Guardian.

Their brother Louis was not present.

The piper who woke up the Queen plays a final tune

During her long reign, the Queen had a personal alarm clock, a Piper. She woke up to the sound of bagpipes beneath her window at all her residences across the country. The Piper played for 15 minutes every morning and on state occasions.

On Monday, the piper played a different tune. The music that signalled the start of the Queen’s mornings will now signal the end of her funeral, as he plays one final lament while her coffin is lowered into the Royal Vault beneath St George's Chapel at Windsor Castle, reports CNN.

Before the service at Windsor, the piper played at the funeral service at Westminster Abbey, which was brought to an end with a moving lament, “Sleep Dearie Sleep”.

A connection to the Queen’s wedding

The oak casket carrying was placed close to the altar with her crown, orb and sceptre on its top surrounded by flowers chosen by the King from gardens that his “mummy” loved. A card in the flowers on top of the coffin read, “In loving and devoted memory. Charles R.” King Charles wrote a a note, which rested a atop a flower arrangement on top of the coffin. AP

The wreath on top of the coffin, at the King’s request, contains foliage of rosemary, English oak and myrtle, which has been cut from a plant grown from myrtle that was in the Queen's wedding bouquet. There are also flowers, in shades of gold, pink and deep burgundy, with touches of white, cut from the gardens of Royal residences, reports BBC.

The funeral procession passed Buckingham Palace before it headed toward Windsor Castle. Children's drawings of the Queen are among floral tributes outside Windsor Castle. Huge and silent crowds lined the route of the funeral procession on Monday. AFP

The Palace was the Queen’s home for 67 years from her coronation until the start of the pandemic. Members of Buckingham Palace staff gathered in front of the building as the coffin passed the Queen Victoria Memorial, BBC reports.

All of London was sombre as this was the last they would see of the monarch they adored.

Royally Upset: Inside Prince William and Kate's US visit amid racism row at home

The royal couple's trip to the United States came after eight years as a racism controversy brewed back home. During their three-day visit to the US, William and Kate were greeted by fans but there was also some booing