Charles, Queen Elizabeth’s eldest son, ascended the throne as king immediately after his mother’s death. Does that make Camilla the queen? And where does Harry stand after stepping back from royal duties?

After Queen Elizabeth II's death, Charles is king and Camilla, Duchess of Cornwall is queen consort. Prince William is next in line to the throne, followed by his children, Prince George, Princess Charlotte and Prince Louis. AFP

It’s the end of an era. Queen Elizabeth II died on 8 September in Balmoral, her retreat in the Scottish Highland. She was 96. The Queen served as the United Kingdom’s monarch for 70 years, making her the second-longest serving sovereign in history.

Announcing the death on Thursday, Buckingham Palace said, “The Queen died peacefully at Balmoral this afternoon. The King and The Queen Consort will remain at Balmoral this evening and will return to London tomorrow.”

What changes for the British family after the death? We take a look at the order of succession.

Here is the line of succession to the British throne following the addition of Prince Louis Arthur Charles to the family 👶👑🇬🇧 pic.twitter.com/0SEnPoo5PJ

So did Charles become king immediately?

Yes. Heir to the throne since he was three, Queen Elizabeth’s son Charles became king immediately. At the age of 73, he is the oldest monarch to ever take the British throne.

Royal officials confirmed he is now known as King Charles III; the first king of that name to sit on the throne since 1685.

Today, the new king will address his subjects as the country mourns the death of his mother. He is also expected to hold his first audience with new Prime Minister Liz Truss, who was only appointed on Tuesday in one of the Queen’s last ceremonial acts before her death. Britain's Charles and Camilla during a visit to The Sandringham Flower Show 2022 in King's Lynn in July 2022. Charles is now king. AFP

Does that make Camilla the queen?

With Charles’ ascension to the throne, his wife Camilla, Duchess of Cornwall, is now the queen consort. The title came with Queen Elizabeth II’s blessing after years of contention, dating back to the days before she even married Prince Charles. But she enjoys no sovereign powers.

Yet it wasn't always a given that the 75-year-old Camilla would be called queen consort. While the wife of a king is traditionally crowned queen, the question of what title Camilla would hold when Charles became king had been a tricky one for many years. This was because of the sensitivity about her status as Charles’ second wife — and the wave of grief that washed over Britain following the death of his former wife, Princess Diana, in a car crash in 1997. A lot changes for the royals after the Queen's death. A sneak peek at the family tree. AP

What about Prince William and Kate?

Prince William is now heir apparent, which means he is next in line to the throne.

The 40-year-old is likely to become the Prince of Wales/Duke of Cornwall following the death of Queen Elizabeth. William held the title of Duke of Cambridge before the Queen's death.

The eldest son of Prince Charles and Diana, his modern and socially conscious outlook – a legacy of his mother – is seen to represent the family’s future. He is a vocal campaigner on environmental issues and is credited with bringing a more relaxed and personal approach to royal duties and hands-on philosophy to raising children, reports AFP.

Kate has so far proved a model royal, raising three children – George, Charlotte and Louis – and making poised public appearances. She stepped up appearances at her husband’s side as his grandmother Queen Elizabeth II retreated from the public eye, underlining her willingness to take on royal duties.

The family comes with its share of scandals. Kate was also dragged into the William and Harry row, with the latter’s wife Meghan accusing her of making her cry on her wedding day. But it has done little to harm her public popularity, with Kate and her husband now the most popular royals, according to the YouGov polling group. 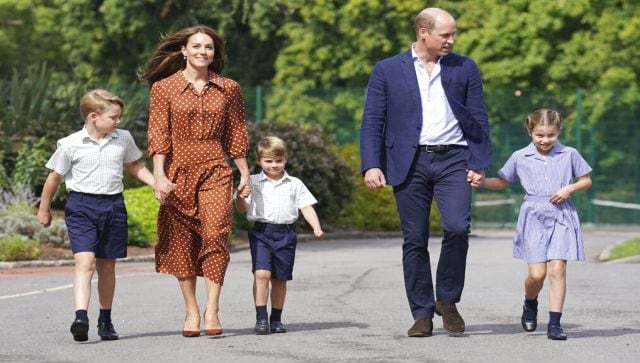 Britain's Prince George, Kate Duchess of Cambridge, Prince Louis, Prince William and Princess Charlotte, arrive at a settling-in afternoon at Lambrook School, near Ascot, England, Wednesday, 7 September 2022. William and Kate are the most popular among the British royals. AP

Where do William and Kate’s children appear in the succession line?

Born in London on 22 July 2013, George was named after the Queen’s father and grandfather. The young Prince takes after his parents’ love for tennis, having recently attended Wimbledon for the first time. He has also accompanied his parents to other big sports events in the past, such as the Euro 2020 final.

Charlotte though George’s younger sister is often seen schooling him. She too loves football as her father recently revealed while visiting the England Women’s team.

The youngest of the lot, Louis is playful and mischievous. He hit headlines with his antics at Queen Elizabeth’s platinum jubilee celebrations.

Where do Harry and his family stand?

Despite a decision to step back from royal duties and move to the United States with his wife, Meghan Markle, Prince Harry is still fifth in line to the throne.

Former British Army captain Harry’s roguish charm made him a much-loved family member, but the Duke of Sussex has since revealed that he was deeply unhappy in the confines of the role. He and Meghan enjoyed a honeymoon period of popularity following their 2018 wedding, but they shocked the family and public by quitting frontline duties in 2020 and with their criticisms of royal life.

The couple now lives with its two children, Archie and Lilibet Mountbatten-Windsor, in California.

After Harry, his son Archie is next in the line of succession. Baby Archie made history by becoming the first biracial British child in the royal family. After his birth, he did not qualify for the title of prince and Buckingham Palace told CNN at the time that his parents had chosen not to use any title at all for their son. Prince Harry is fifth in line to the throne despite stepping away from royal duties with his wife Meghan. AFP

Lilibet comes next, making her seventh in line. Her name is a tribute to the Queen – Lilibet was her family nickname. Born in California in June 2021, Harry’s daughter is the most senior royal in the line of succession to have been born overseas, reports CNN.

What about Charles’ brother Andrew?

The Duke of York is the third of the Queen’s four children and now eighth in line to the throne.

Reportedly Queen Elizabeth’s favourite son, Andrew often courted controversy with his love life and business dealings. But his relationship with convicted US paedophile Jeffrey Epstein and accusations of a sexual relationship with a minor plunged the family into a full-blown crisis. Andrew is one of the most controversial members of the family. He is said to be the Queen's favourite son. AP

The former Royal Navy helicopter pilot, who saw service in the 1982 Falklands War, was stripped of his honorary military titles and charitable positions before he eventually settled a US civil case for sexual assault in February 2022, reports AFP.

Divorced from Sarah Ferguson, the couple have two daughters: Beatrice, who married Edoardo Mapelli Mozzi, a descendant of Italian nobility, in 2020, and Eugenie, whose husband Jack Brooksbank is a bar manager and brand ambassador.

What about Anne and the other royals?

The succession line goes on but it is unlikely that they will ever be crowned. After Andrew comes, Beatrice and her daughter Sienna Elizabeth. Next is Princess Eugenie, Andrew and Sarah’s younger daughter, according to AP.

August Brooksbank, born to Eugenie and James Brooksbank in February 2021, is 12th in line to the thrown.

The youngest child of Queen Elizabeth II and Prince Philip, Prince Edward comes next. The Earl of Wessex, he’s currently a full-time working member of the royal family.

According to the order of succession, James, Viscount Severn, the younger child of Edward and his wife Sophie, Countess of Wessex is 14th on the list, followed by Lady Louise Mountbatten-Windsor, Edward and Sophie’s daughter. Britain's Princess Royal Anne and Charles during the Braemar Royal Highland Gathering at the Princess Royal and Duke of Fife Memorial Park in Braemar, Scotland on 3 September. Anne is No 16 in the order. AP

A prominent face of the royal family, Princess Royal Anne, the second child and only daughter of Queen Elizabeth II and Prince Philip, was third in the line of succession at birth, Today she is No 16, behind her brothers, their children and grandchildren.

Her straight-talking style, relentless work schedule and unfussy demeanour have earned her high popularity ratings with the British public. A respected horsewoman, she was the first British royal to compete in the Olympics, at the 1976 Montreal Games, is president of the British Olympic Association, and a member of the International Olympic Committee, reports AFP.

She has two children, Peter and Zara, from her first marriage to Mark Phillips.

Tall Tales: What is the limb lengthening surgery that man spent Rs 1.2 crore on?

A limb lengthening surgery involves having both the femurs (thigh bones) broken. Adjustable metal nails made of titanium are then inserted down their centres. The nails are then extended one millimetre every day for about 90 days via a magnetic remote control

Explained: With Rishab Shetty's Kantara, here is how the Kannada film industry grew beyond the boundaries

Here is how Hombale films Kantara and KGF2 made great records at the box office post pandemic which many big starrer Bollywood films failed to do.