Explained: What is the Royal Vault, where the Queen is laid to rest? Who else is buried there?

After a state funeral at Westminster Abbey, Queen Elizabeth II was carried to Windsor. This was the last glimpse of the monarch the world would see, as the coffin was lowered into the Royal Vault, a 200-year-old burial chamber located 16 feet beneath St. George’s Chapel on the castle grounds

The United Kingdom came to a standstill as the country said its final goodbye to Queen Elizabeth II. The state funeral of its longest-reigning monarch took place at Westminster Abbey in London at 3.30 pm IST, with 2,000 people in attendance, among them foreign royals and world leaders.

Hundreds and millions across the globe watched the service, which was streamed live. After this, the Queen’s coffin was taken in a walking procession from Westminster Abbey to Wellington Arch at London’s Hyde Park Corner. Along this route, people who thronged the capital watched the procession from designated viewing areas.

Also read: Currency, national anthem, and more: All that will change in the UK after Queen Elizabeth II

The coffin travelled by hearse from London to Windsor Castle, where the walking procession took place up the palace’s Long Walk. King Charles III and senior members of the royal family joined the cortege in the Quadrangle in Windsor Castle, reports BBC.

A final family ceremony was held at the St George’s Chapel in the castle. This church is chosen by the royals for weddings – Prince Harry and Meghan got married here in 2018 – christening, and funerals.

The Queen was lowered into the royal vault in King George VI Memorial Chapel, an annexe of St. George’s Chapel, on the grounds of Windsor Castle. 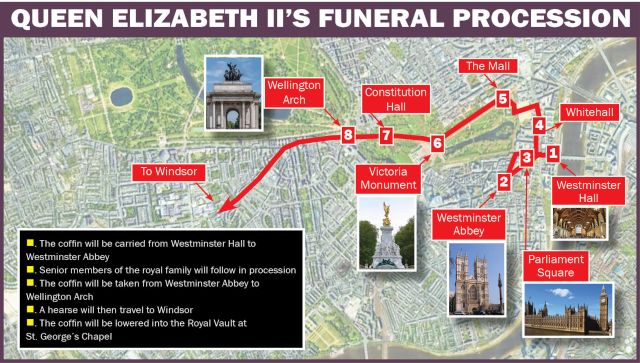 The Queen’s state funeral will take place at Westminster Abbey in London at 3.30 pm IST followed by a procession. Graphic: Pranay Bhardwaj

What is the Royal Vault?

The Royal Vault, which days back to the 15th Century, is a burial chamber located 16 feet beneath St. George’s Chapel. The excavation and building of the vault were ordered in 1804 by King George III; its construction was completed in 1810.

It was designed as the final resting place for members of the royal family.

It is a stone-lined chamber, 70 feet long and 28 feet wide; the entrance is closed by an iron gate.

There is enough space in the vault to hold 44 bodies. Thirty-two coffins are arranged on shelves built into the stone walls, while the remaining 12 are in the centre of the vault. 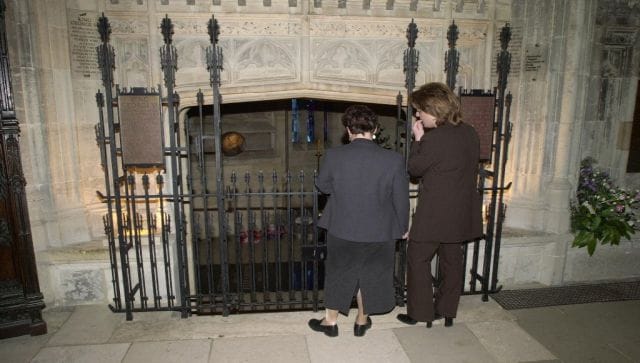 Visitors at the George VI Memorial Chapel in St. George’s Chapel, Windsor, where Queen Elizabeth II will be interred. AFP

How are coffins lowered into the vault?

During the final moments of the funeral, a black-and-while diamond-shaped stone flooring is removed, providing access to this chamber. It is then lowered through this opening into the vault by an electric lift.

Once the lift reaches the bottom of the shaft, the coffin is moved down the corridor and into the vault. It is placed on one of the shelves or a plinth inside, according to a report in Daily Mail.

Who is buried in the vault?

As of now, there are 25 members of the royal family resting in the chamber.

George III was the first British king to be interred in the Royal Vault after his funeral in February 1820. However, the first member of the family to be placed inside was George III’s daughter, Princess Amelia, who died at age 27 in November 1810.

Two other British Kings, George IV and William IV, were placed in the vault after they died in 1830 and 1837 respectively.

Queen Elizabeth II’s father King George and her mother were laid to rest inside the vault. The ashes of her sister, Princess Margaret, are also placed there. The monarch’s husband Prince Philip, who died in April 2021 was the last royal to be interred in the vault. The funeral service of Britain’s Prince Philip inside St. George’s Chapel in Windsor Castle, west of London. He was the last royal to be lowered into the Royal Vault, where the Queen’s coffin will be placed today. AFP

Why was Diana not buried in the vault?

Princess Diana was given a royal funeral but since she was not a princess at birth and was divorced from Charles at the time of her death in 1997 her body was not placed inside the vault.

She was buried at Althorp House, the Spencer family home in Northamptonshire.

Can people see the Queen’s burial?

The state funeral at Westminster Abbey and the committal service at Windsor Castle were both televised. Only the interment service at St. George’s Chapel was a private ceremony with no cameras allowed.

In a historic first, the lowering of the Queen’s coffin into the Royal Vault will be televised. The moment will be “poignant and “historic”, a royal expert told Daily Star before the funeral.

The casket carrying the monarch is made of English oak with brass fitments and lined with lead, similar to that of her husband. The royal family relies on lead-lined caskets which are airtight and this helps preserve the bodies inside. Floral tributes are laid by members of the public outside Windsor Castle onto Cambridge Drive, near the Long Walk, Windsor, on Sunday ahead of the funeral of Queen Elizabeth II. AP

The Queen’s husband, Prince Philip, will be removed from his current resting place in the Royal Vault and placed beside the Queen.

After the cameras are switched off, both the caskets will be hoisted back for a private interment, reports The Sun. They will be moved to the church’s King George VI Memorial Chapel to be reunited with the Queen’s parents, George VI and the Queen Mother, and the ashes of Princess Margaret.

Can people visit the vault?

While no visitors are allowed inside the Royal Vault people can attend services for free at St. George’s Chapel on a regular day. It is also open to those who have purchased tickets to Windsor Castle.

People in India paid respects to Queen Elizabeth II who became the UK's longest-serving monarch in 2015, when she surpassed the record of Queen Victoria, who had ruled from 1837 to 1901

The crowd had gathered around the Buckingham Palace, London on Thursday because of the reports that she was very ill

Explained: How Queen Elizabeth's coffin will be taken to her final resting place

Around 6,000 soldiers, sailors and air crew from the British armed forces will take part in the procession along with 200 Royal Air Force musicians. Members of the royal family, led by the new King Charles III, will follow Queen Elizabeth II's casket