The 28-feet black granite statue of Subhas Chandra Bose was unveiling accompanied by the tune of 'Kadam Kadam Badhayeja' the traditional song of Netaji’s Indian National Army. The installation was hand-sculpted by a team led by renowned artist Arun Yogiraj

On 23 January to mark the 125th birth anniversary of Netaji, Prime Minister Narendra Modi unveiled a hologram (left) with the same dimensions as statue. In late July, the hologram was switched off as work to fit the statue started. Image courtesy: @NarendraModi/Twitter

The Centre says the name change it symbolises a shift from erstwhile Rajpath being an icon of power to Kartavya Path being an example of public ownership and empowerment.

As part of the grand makeover, the statue of freedom fighter Netaji Subhas Chandra Bose was unveiled under the canopy at India Gate.

The statue was unveiling accompanied by the tune of “Kadam Kadam Badhayeja”, the traditional song of Netaji’s Indian National Army.

The statue is part of the Centre’s Rs 13,450-crore Central Vista Project, which will have a new Parliament building, new office and residences for the prime minister and vice-president and new ministry buildings.

The North and South Blocks, the secretariat buildings flanking Rashtrapati Bhavan, will be converted into museums.

A 100-feet-long truck with 140 wheels was specially designed for this giant granite stone to travel 1,665 km from Khammam in Telangana to New Delhi, the culture ministry said.

The statue was “hand-sculpted using traditional techniques and modern tools”, the Ministry of Culture said.

The man behind the statue

A team of 20 to 25 sculptors led by renowned artist Arun Yogiraj have worked on the statue.

Yogiraj comes from a family of Mysuru palace artists and is the son of noted sculptor Yogiraj Shilpi. Holding an MBA, Yogiraj worked with a private firm for a few years before taking up sculpting full-time in 2008.

The 39-year-old from Mysuru is best known for the 12-feet statue of Vedic scholar Adi Shankaracharya at Kedarnath.

He was roped in by the government and worked closely with a team from the NGMA.

Once again Thanks to our beloved @narendramodi @PMOIndia @TheJSWGroup for giving me the opportunity to sculpt stone murthi of Adi Shankaracharya…🙏🏾 https://t.co/Tp7lLxdvYF

Yogiraj, who specialises in creating portrait sculptures, landed in Delhi on 1 June and worked specifically on the facial features of the Bose statue.

Yogiraj told The New Indian Express that the “PM Adi Shankaracharya’s idol very much” after which the two were supposed to meet. He met with the Ministry of Culture after which he was told that he would meet Modi.

During this meeting, Yogiraj gave the PM a two-foot statue of Bose. “…I started working on a two-foot Bose statue on my own, which I presented to the PM in April. After the meeting, came another piece of good news; I was given the assignment of national importance – the statue of Bose,” he told The New Indian Express. 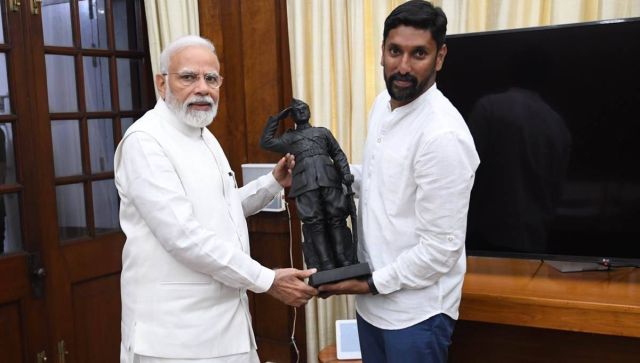 Installation of the statue

The team of sculptors put in 26,000 man-hours of “intense artistic endeavour” to carve out the statue, the culture ministry said.

The towering statue of Netaji is “one of the tallest, realistic, monolithic, handmade sculptures in India”, the ministry said.

The National Gallery of Modern Art (NGMA) under the Ministry of Culture, prepared the design for the statue. According to NGMA director-general Adwaita Gadanayak, the black granite picked for the statue was meant to be reflective of Bose’s “very strong character”.

A special 10-minute drone show on Netaji’s life will be projected at India Gate at 8 pm on 9, 10 and 11 September.

Both the cultural festival and the drone show would be open to the public.

Also read: Rajpath to make way for Kartavya Path: How India is stepping away from its colonial past

In January, Modi announced that the Netaji statue would come up under the India Gate canopy.

Built in 1936, the canopy earlier housed the statue of King George V.

On 23 January, to mark the 125th birth anniversary of the freedom fighter, the prime minister unveiled a hologram with the same dimensions as the original, which was placed on the same spot.

In late July, the hologram was switched off as work to fit the statue started, according to a report in The Indian Express.

The prime minister had tweeted:

The celebrations at Kartvya Path will commence at 8.45 pm today after the main function and will continue from September 9 to September 11 from 7 to 9 pm, according to PTI.

To demonstrate the spirit of “Ek Bharat, Shrestha Bharat” and unity in diversity, a cultural festival by 500 dancers from all parts of the country will be held at Kartvya Path.

Modi will witness a part of the performance at the amphitheatre near India Gate.

Around 30 artists will perform tribal folk art forms such as Sambalpuri, Panthi, Kalbelia and Kargam to “live” music.

Lauding the government for the timely completion of the project, whose foundation was laid by Prime Minister Narendra Modi in 2019, he pointed out that hindrance, pendency, and diversion were not aspects of his government