From Kingsway to Kartavya Path: A trip down Rajpath's memory lane

The three-kilometre stretch, one of the most important roads in India, is more than 100 years old. The British called it Kingsway. Today, Rajpath will officially be renamed Kartavya Path, as India takes yet another step to shed its colonial past

Rajpath is the ceremonial boulevard that runs from Rashtrapati Bhawan all the way down to Vijay Chowk and India Gate, and ends at the 16th century fort, Purana Qila. PTI

The name change was made official on Wednesday after members of New Delhi Municipal Council (NDMC) held a meeting and issued a public notice on the same.

Union Minister of State for External Affairs and Culture Meenakshi Lekhi, who is also a member of the NDMC, said the proposal was approved at the meeting.

“Taking into consideration the values of the democratic system and the country’s rich cultural heritage, the council has unanimously approved the proposal to rename Rajpath as Kartavya Path in the special meeting,” she said.

She added that the idea behind the move is to inculcate democratic values and principles in the minds of people.

The renaming of Rajpath to Kartavya Path is part of the Modi government’s drive to rid the country of its colonial past.

In his recent Independence Day speech, Prime Minister Narendra Modi had said stressed on the abolition of symbols relating to colonial mindset. “We have to give up the colonial-era mentality. Instead, we must rely on our capabilities,” he had said.

Also read: Rajpath to make way for Kartavya Path: How India is stepping away from its colonial past

The revamped Kartavya Path will finally be opened to the public after a break of 20 months.

From 9 September, the entire stretch will be thrown open to the public.

Ahead of the grand inauguration, here’s a short history of the iconic stretch of the boulevard that runs from the Rashtrapati Bhawan to Vijay Chowk and India Gate and ends at Purana Qila in the nation’s capital.

On 12 December, 1911, at the Delhi Durbar, King George V announced the shifting of British India’s capital from Calcutta to Delhi. Given Delhi’s location, the British thought it would be easier and more convenient to rule India.

As per the book New Delhi: Making of a Capital, architects Edwin Lutyens and Herbert Baker started carving out the new capital.

The town planning committee settled upon an area that lay to the south of Shahjahanabad — Raisina Hill, which was selected as the spot for the new centre of power. While not developed, this area of land had an important elevation through which one could view the previous cities of Delhi, historian Swapna Liddle writes in her book Connaught Place And The Making of New Delhi.

“Looking eastward and starting from the left, one could see Shahjahanabad, 14th-century Ferozabad, Purana Qila, and further to the right, the tomb of the emperor Humayun and the Sufi shrine of Nizamuddin. This was a site that could connect the new capital to the imperial past of India,” according to Liddle’s book.

The ceremonial axis got its name similar to Kingsway in London, an arterial road built in 1905 to honour George V’s father, Edward VII. It was lined with canals, lawns, and rows of trees on both sides.

From Kingsway to Rajpath

After India attained independence, Kingsway was renamed as Rajpath.

In fact, according to historians, the earliest mentions of Rajpath can be traced to maps in the late 1950s.

It was more of a literal translation of the name rather than a change as Rajpath in Hindi means ‘Kingsway’.

An Indian Express report states that at one point in time, Congress leaders had suggested converting the entire area into hospitals. "The Viceregal House and other similar buildings should be used as hospitals...we do not want any pomp and splendour, but a state has to keep up with a certain dignity as a state," Sushila Nayar, a disciple of Mahatama Gandhi wrote to Nehru.

However, later it was chosen as the place where the Republic Day Parade would be organised.

The Rajpath in Delhi is Hindi for Kingsway, its original name. It was named as such in the honour of King George V. His statue would be replaced by Subhas Bose's on September 8. It's time we renamed Rajpath. There is no raja and there is no raj now. Pls retweet in public interest pic.twitter.com/D6OlrKpDYh

Modifications were also made — more trees were planted and to improve the north-south connectivity of the Rajpath, a new road, the Rafi Ahmad Kidwai Marg, was also constructed. 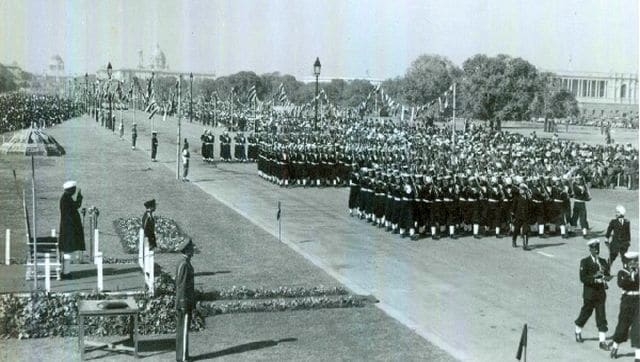 As part of the Central Vista Redevelopment Project, the boulevard has been modified to reflect an avenue that truly befits the New India. A statement from the Prime Minister’s Office issued on Wednesday said, “It symbolises a shift from erstwhile Rajpath being an icon of power to Kartavya Path being an example of public ownership and empowerment.”

The redeveloped stretch has red granite walkways spreading around 1.1 lakh square metre with greenery all around, more than 133 light poles along Rajpath, 4,087 trees, 114 modern signages and stepped gardens.

More than 900 light poles, including those in the gardens and along Rajpath between the Rashtrapati Bhavan and the India Gate, have been installed — a move aimed at making the Central Vista more pedestrian-friendly round the clock. Eight amenity blocks have been built while four pedestrian underpasses have been constructed in the entire stretch that has 422 red granite benches.

Fundamental duties should be the first priority of citizens: PM Modi

Addressing Constitution Day celebrations in the Supreme Court, PM Modi said the entire world was looking at India, which is witnessing rapid development and economic growth