A Ravana looking like Khilji? Just the many reasons Adipurush is facing backlash

Based on the Hindu epic Ramayana, a 1.46-minute teaser of Adipurush was released on 2 October, and it has remained the talk of the town since then. From slamming the ‘poor’ VFX used in the movie to calls for a ban, a look at the Adipurush controversy

From slamming the ‘poor’ VFX used in the movie to calls for a ban, a look at the Adipurush controversy. PTI

Controversies are not new to the movie industry. There have been multiple instances in the recent past where a section of people has called for a boycott or ban of some or the other film.

From tweaking films’ names to song lyrics, filmmakers have many times resorted to changes in their movies amid boycott demands.

The latest movie to fall prey to such controversies is Om Raut’s Adipurush, which is set to release in January next year.

Based on the Hindu mythological epic Ramayana, a 1.46-minute teaser of the movie was released on 2 October in Uttar Pradesh’s Ayodhya and has remained the talk of the town since then.

The head priest of the Ram temple in Ayodhya has asked for an ‘immediate ban’ on the multilingual period saga starring Prabhas as Ram, Saif Ali Khan as demon king Lankesh, and Kriti Sanon as Sita.

Some politicians and actors have also raised objections to the movie and its portrayal of characters, especially Ravana and Hanuman.

Why are some people calling for a ban on Adipurush? Let’s understand the controversy in detail:

Adipurush has courted major controversy over the looks of Saif Ali Khan’s fierce Ravana who is shown sporting a beard and a buzz cut.

His look has been compared by some to Ranveer Singh’s Khilji in Padmaavat.

In the teaser, Hanuman can be seen with a beard and dressed in leather, which has triggered calls for #BoycottAdipurush and #BanAdipurush on social media.

Ayodhya priest Satyendra Das told the media on Wednesday (5 October), that the depiction of Ravana is “absolutely wrong and condemnable”.

“Through the media, we demand an immediate ban on the film,” he was quoted as saying by PTI.

Further, he claimed Raut’s movie does not portray Lord Rama and Hanuman as mentioned in the epic, saying which goes “against their dignity”. Adipurush is facing flak for the portrayal of Ravana and Hanuman. Image Courtesy: Adipurush teaser (Firstpost)

Madhya Pradesh home minister Narottam Mishra has warned the film’s makers of legal action if scenes depicting Hindu deities in the “wrong” way were not removed.

“I have seen the teaser of Adipurush. There are objectionable scenes in it,” Mishra, who is also the spokesperson of the MP government, told reporters in Bhopal.

“The dresses and look of Hindu deities as seen in the trailer were not acceptable. Hanuman ji is shown wearing leather, whereas the description (in the scriptures) of the deity’s costume is different… These are scenes that hurt religious sentiments. I am writing a letter to Om Raut to remove all such scenes from the film. If not removed, we will consider legal action,” Mishra was quoted as saying by PTI.

BJP MP Brij Bhushan Singh said that it seems like such controversies are being created deliberately.

“Making a film is not a crime. They should be made but creating deliberate controversies to hog the limelight is inappropriate,” Singh was quoted as saying by PTI.

Meanwhile, BJP MLA Ram Kadam has threatened to stop the release of the movie in Maharashtra.

“Once again, in the film Adipurush, the filmmakers have hurt the faith and sentiments of crores of Hindu people by ironing our gods and goddesses to get petty publicity,” he was quoted as saying by India Today.

Calling for a ban on Adipurush, he said an apology or removal of scenes would not work.

“This time, mere apology or cropping of scenes will not work. To teach a lesson to such thinking, any such film should be completely banned,” Kadam added.

The Vishva Hindu Parishad (VHP), a right-wing outfit, has also taken objection to the portrayal of Lord Ram, Lakshman and Ravana in Adipurush, claiming that it “ridiculed Hindu society”.

The Hindutva organisation has also threatened that the film would not be allowed to be released in cinemas.

Ajay Sharma, Prachar Pramukh of the Vishwa Hindu Parishad’s (VHP) Sambhal unit, claimed, “The values ​​of Hindu society have been ridiculed. Hindu society will not tolerate this.”

He alleged that Ravana’s characterisation is not according to the Ramayana and related religious scriptures, PTI reported. 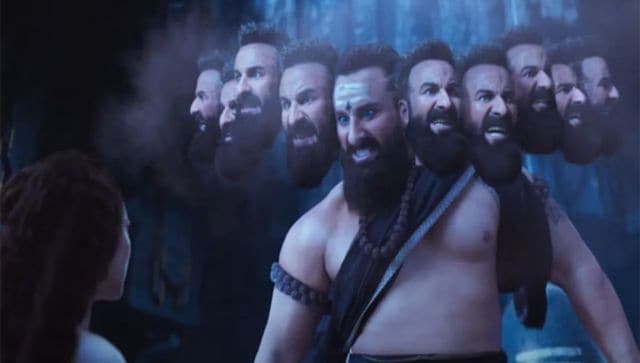 “The VHP will not allow this film to be screened in theatres,” he warned.

Mukesh Khanna, who essayed the role of Mahabharat Bhishma Pitamah in BR Chopra’s Mahabharat, said Hindu Gods are not handsome like Hollywood hero Arnold Schwarzenegger, they were “beautiful”.

He said in a video as per Hindustan Times, “They are not bodybuilders, they have a soft, docile, and grand look on their faces. No one can claim they met Ram ji or Krishna ji, but from whatever we have seen over the years, we believe that Ram didn’t have a beard or moustache. Hanuman ji’s image is set in people’s minds, how can you make him look like that in the film?”

In a strong rebuke, Khanna said “this film will not work.”

Known for her portrayal of the iconic role of Sita in Ramanand Sagar’s Ramayan, actor Dipika Chikhlia also spoke on the Adipurush teaser, saying it shows the antagonist, Ravana, as a “Mughal, not a Sri Lankan”.

She told Aaj Tak, “A film’s characters must appeal to the audience. If the character is from Sri Lanka, they should not look like Mughals. I could not understand much as we get to see him for mere 30 seconds in the teaser, but he does look different. I agree that times have changed and VFX is an essential part but only as long as the people’s sentiments are not hurt. (But then) It is only a teaser, may be it does not do justice to the film.”

When the teaser of Adipurush was released, it hit headlines for other reasons. The netizens trolled the ‘poor’ CGI and VFX used in the movie.

Some even compared scenes in the teaser to those in the Avenger series and Planet of the Apes. Many called it a newcomer’s work and even compared it to online game Temple Run.

A user wrote on Twitter, “Even the VFX & CGI of Daily soap. #BALVEER was better than this. Biggest scam in the history of Bollywood. Om Raut #500cr kha gye???” (sic).

Even the VFX & CGI of Daily soap #BALVEER was better than this.

“Adipurush’s trailer is so outrageously cheap, that they should just withdraw the release, remake the movie, attempt release again. Om Raut’s Tanhaji was also cringe, but somehow succeeded. Not this one,” wrote another.

#Adipurush ‘s trailer is so outrageously cheap, that they should just withdraw the release, remake the movie, attempt release again.

Om Raut’s Tanhaji was also cringe, but somehow succeeded. Not this one.

So much #disappointed with #Adipurush trailer. Rajamouli sir is the only director who could do justice to all charecters .Copy kiya Game Of Thrones ko Mujhe lagta hai Saif looks more like Khilji. Most imp am not watching this pogo animation#BoycottAadipurush #boycottTSeries pic.twitter.com/WqWSvOT7Lr

After facing flak for the CGI, popular VFX company NY VFXwaala, issued a clarification, saying that they have not worked on the film’s special effects. As per Indian Express, the film’s credit slate says Prasad Sutar, one of the co-founders of Ajay Devgn’s company, is the VFX supervisor.

Trade analyst Taran Adarsh shared the statement on his Twitter.

“The depiction of Hindu Gods and Goddesses is being done in a wrong way in this film. In this film, Hindu Gods and Goddesses are shown in a very distorted form, wearing leather clothes and they are being seen speaking in an indecent manner. In fact, a very low level language has been used in the film which is provoking and hurting religious sentiments. There are dialogues and depictions spreading religious and caste hatred in the film. Ramayana is our history and our spirit, however, in Adipurush, Lord Hanuman is shown as a Mughal,” the notice reads.

“Which Hindu bears a beard without a moustache that Lord Hanumanji has been shown to do. This film is a complete Islamisation of Ramayana and of Lord Ram, Maa Sita, Lord Hanuman. Even Saif Ali Khan who is playing the role of Ravana in the Adipurush movie looks like Taimur and Khilji. The film is going to spread hatred among a particular class by inciting religious sentiments in the country. This picture is being widely publicised through the Internet, which is completely harmful for our society and country. You are making a film that hurts the sentiments of crores of Hindus,” the notice added.

Om Raut, whose last film was Tanhaji: The Unsung Warrior, said he was “disheartened” by the reaction to the film’s teaser.

“I was disheartened but not surprised because the film is made for a larger medium. You can cut it down to some extent, but can’t bring it down to a mobile phone, that’s an environment I can’t control,” he was quoted as saying by PTI.

“If given a choice, I had never put it on YouTube but that’s the need of the hour. We need to put it there so that it reaches a wide audience,” the filmmaker added.

Raut said that his film aims to bring people of all ages to theaters, reported Indian Express.

Reacting to the controversy surrounding Ravana, he told India Today, “The Ravana that we saw earlier was an artistic representation of the evil that Ravana was. My Ravana is demonic too, but in today’s time, if I picturise Ravana like this, then that is it. If you say, that I have changed his colour, then I disagree. It’s the same colour, it’s the colour of religion.”

He also said that the makers have not done “anything wrong” in the movie.

'Do you have 100 heads like Ravana?' Kharge hits out at PM Modi