'Look What You Made Me Do', a dark dance track that is the first single off Swift's upcoming album Reputation, pushed Despacito to number two on the Billboard Hot 100 chart for the week through 7 September. 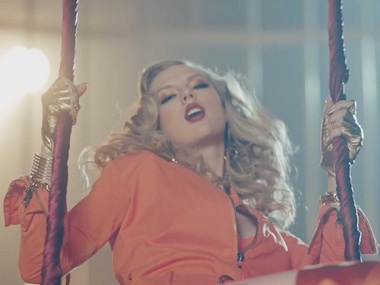 Taylor Swift in the song 'Look What You Made Me Do'. Screen grab via YouTube

The pop superstar's song has broken the one-day streaming record on Spotify — to which Swift recently returned after a high-profile boycott.

Tracking service Nielsen Music said 'Look What You Made Me Do' had the second highest number of streams ever over all platforms, trailing the 2013 viral dance craze track 'Harlem Shake'.

'Look What You Made Me Do' also posted the year's most downloads, at 353,000, the most since Justin Timberlake's feel-good summer song 'Can't Stop the Feeling!' in May 2016.

'Despacito' tied 'One Sweet Day,' the 1995 ballad by Mariah Carey and Boyz II Men, for the most weeks at number one. The feat is all the more striking as few non-English songs have dominated the US charts.

'Look What You Made Me Do' — accompanied by a video that opens at a cemetery and depicts Swift dressed ghoulishly and wielding a baseball bat — marks a more sinister side to a singer long considered anodyne.

The song appears to hit back at Kanye West, who infuriated Swift a year earlier by boasting in a song that she may sleep with him because he "made that bitch famous" — presumably a reference to how the rapper interrupted her acceptance speech at the MTV Video Music Awards in 2009.

Swift over the weekend released a second track off the new album entitled '...Ready For It?' Swift reaches deeper into hip-hop on the song, opening with a heavy beat before a lighter pop chorus.

Swift describes her woeful love life, one of her favorite topics, but hints more openly to sex, singing: 'In the middle of my night / In my dreams / You should see the things we do, baby.'

The song — like much of Swift's blockbuster previous album, 1989 — is written with the chart-topping Swedish pop producer trio of Max Martin, Ali Payami and Shellback.

tags: Billboard Hot Chart , despacito , look what you made me do , Taylor Swift , US singles chart