Priyanka Chopra on taking Nick Jonas' last name: Doesn't dilute my identity, he gets added to who I am

In her fifth appearance on The Tonight Show Starring Jimmy Fallon, Priyanka Chopra Jonas has explained why she decided to take up her husband's surname.

During her interaction with the talk show host, Chopra revealed that her taking up the last name 'Jonas' symbolises the unity of two families. "I always wanted to add his name to mine because I feel like we're becoming family. I'm a little traditional and old school like that," Chopra told Fallon. However, she added that adding the surname does not "take away" from her identity. "He gets added to who I am".

Chopra also revealed that the venue for her grand wedding ceremony was suggested by Nick, before which the actress wanted to conduct the nuptials on a private island. While still indecisive on the wedding venue, Nick told Priyanka, “Why aren’t we doing this in India? Shouldn’t I be taking my bride from her home?”

Priyanka, who appeared on Fallon's talk show to promote her upcoming romantic comedy parody Isn't it Romantic? , also addressed the speculation surrounding the viral Super Bowl photo, where Priyanka is seen cuddling Nick. The adorable picture had left fans wondering about the identity of the photographer. Priyanka revealed that the one of her cousins, who was also watching Super Bowl with the pair, had captured the moment. 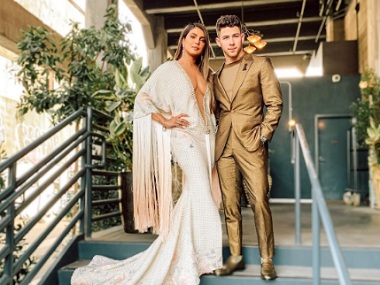