This year, Golden Globe Awards witnessed a few surprising wins and climate change advocacy in acceptance speeches, along with some of the best meme-worthy expressions from the stars.

The best picture went to 1917, while Renée Zellweger won best actress for Judy, and Joaquin Phoenix beat out Adam Driver and Christian Bale to win best actor for Joker. Phoenix's winner's speech may not have pleased everyone, but it was certainly memorable, covering climate change issues and a plea for celebrities to use their private jets less often.

The first major award show of the year always delivers moments that lead to tons of tweets, whether they are candid reactions, clever quips, or near-instant GIFs that become long-lasting memes.

For the 77th Golden Globe Awards, Ricky Gervais kicked off the ceremony by telling the audience his fifth time hosting would be his last, then proceeded to deliver an expletive-laced skewering of Hollywood's elites. True to his reputation, Gervais opened the show on 5 January with a mix of evisceration and exasperation, pretending to confuse Joe Pesci for Baby Yoda, taking a dig at Felicity Huffman's college admission scandal, calling the Hollywood Foreign Press Association racist, and declaring Netflix's takeover of Hollywood.

Cutting to Amy Poehler during Ricky Gervais's monologue is just a cruel reminder of what we used to have. #GoldenGlobes pic.twitter.com/QlBEJKkW0J

Ricky Gervais may be vegetarian but that doesn’t stop him from EATING PEOPLES SOULS. #GoldenGlobes — Charles Thorp (@charlesthorp) January 6, 2020

Gervais should just keep cursing and getting bleeped so we can all just fill in the better jokes he could be making — Judy Berman (@judyberman) January 6, 2020

Tom Hanks did not seem to enjoy Ricky's opening monologue Hanks made a facial expression during the 2020 Golden Globes awards during the opening monologue of the night. And his response got all of the Twitter talking and meme-ing. Twitter users quickly shared screenshots of Hanks, calling his reaction to Gervais’ speech very relatable. “Tom Hanks is all of us during that monologue,” one of the users tweeted.

Tom Hanks is all of us during that monologue. #GoldenGlobes pic.twitter.com/JDwTaQ8sTy — Ethan Anderton (@Ethan_Anderton) January 6, 2020

Tom Hanks is the only thing worth watching at the #GoldenGlobes pic.twitter.com/EaYiwtB7h7 — No, uh... (@heeheehoohahaha) January 6, 2020

I would like to thank Tom Hanks for providing this brand-new meme for 2020 #GoldenGlobes pic.twitter.com/2frzvP2baQ — Ashley Carter (@AshleyLCarter1) January 6, 2020

The best part of any award ceremony is the winners' acceptance speeches and the reaction shots from the audience. During the Golden Globes, Brad Pitt won the award for Best Performance by an Actor in a Supporting Role for Once Upon A Time In Hollywood, and the camera could not stop giving very generous glimpses of his ex-wife Jennifer Aniston's expression throughout his acceptance speech. When Pitt cheekily qipped, "I wanted to bring my mom (to the Globes) but I couldn’t because any woman I stand next to they say I’m dating," the camera lens stayed glued to Aniston the entire time during that remark.

I need the camera man to share a real quick shot of the entire audience so I can figure out how far apart Jennifer Aniston and Brad Pitt are at all times #GoldenGlobes pic.twitter.com/AwxjapyS83

the fact that jennifer aniston is seated behind leo dicaprio while brad pitt talks to him during his acceptance speech is *DIRECTION* #GoldenGlobes — Jarett Wieselman (@JarettSays) January 6, 2020

Jennifer Lopez, who was nominated for the Best Supporting Actress for Hustlers, arrived at the ceremony in a white Valentino gown with a billowing silhouette and an exaggerated green and golden bow. While some Twitter users thought it was a huge Christmas gift box owing to the festive colour scheme of the gown, a few started a series of 'who wore it better' comparison posts.

Check out all the reactions here

#JenniferLopez stylist thinks it's still Christmas, maybe that's why #JLo was dressed like a package with a bow. #GoldenGlobesAwards2020 pic.twitter.com/eRNsCV9GPO 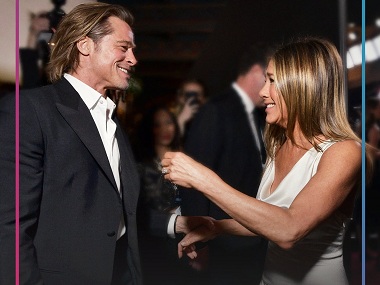