From Bellatrix to Parek & Singh: The musical acts to look out for at the Nariyal Paani music fest

The quiet sound of the surf is matched only by the whispering of the palm fronds. And as the sand heats up under the sun, you hear the strains of music, growing louder.

This is the Nariyal Paani festival — which, like its name suggests, is the perfect complement to the beach lifestyle.

Possibly India's most bohemian music festival, the third edition of the Nariyal Paani kicks off over this weekend (21-22 January) at the quiet Morapada beach in Alibaug, just 20 minutes away from the busy Mandwa jetty.

The festivalgoers here, however, are united not only in their love for music (which encompasses a range of genres, including folk, jazz, reggae, to electro-pop, hip-hop, beatboxing) and a laidback experience — they're also bound by a concern for the environment.

All of the food, drink and wares you'll see at the stalls put up in and around the festival venue meets these criteria: organic, sustainable and eco-friendly. There's a strict 'no plastics' and the fest décor makes use of only biodegradable material.

The focus of the festival, however, is on music with a great vibe. It's a vibe that will have you swinging well past sundown, swaying under the night sky, with no thought for tomorrow.

The line-up this year offers an exciting mash-up of Indian and international independent artistes performing live original music. Here's a lowdown on all the artistes we're excited to hear:

Playing in multiple bands at the festival, Anand Bhagat will also be performing as part of a drum circle to get things started at Nariyal Paani 2017. The percussionist from Mumbai has been drumming and conducting workshops to teach drumming for a while now, and is inspired by the power of drums and the effect it can have on people — making them pause and bringing them together.

Having collaborated with Feyago at Nariyal Paani 2016, the four-time beatboxing champion Bellatrix will be back to conquer the stage all by herself. Unlike most beatboxers, Bellatrix has a degree in jazz double bass from the Guildhall School of Music & Drama, London. Her broad palette of influences includes hip-hop to jazz, folk, and as she says — the downright weird, is apparent across her music and character. She has an unusual and distinctive singing voice and uses live looping with her voice, bass and synth to “conjure images of an abstract world drenched in sounds you can taste”.

A musical collective of giants in India’s indie scene, coming together and named so just for the purpose of this music festival: Ankur Tewari, Sidd Coutto, Clayton Hogermeer and Nathan Thomas. This promises to be an absolute treat! Donn Bhat is a genre-defying, live experimental electronica producer and composer, and Donn Bhat + Passenger Revelator is his live music project. He has been described as “easily one of India’s most charismatic live performers”, and has played at music festivals such as IOMMA (Reunion Island) and the biggest of them all — Glastonbury. His recently released second album Connected more than lives up to what one expect from such a stellar musician.

The Fanculos was dreamt up by half-Italian, half-Guyanese, British-born musician Ramon Ibrahim. Ramon was heavily influenced at an early age by British SKA bands such as The Specials, The Beat, Madness etc., and set about writing an original set based on his own interpretation of SKA and other things. The Fanculos set is a mixture of high energy SKA, dub, reggae and funk. The main focus of this 5-piece band is live performance, audience interaction, good times and just general fanculery!

Fiddler's Green are an acoustic world folk jam band from Kolkata, comprising of an eclectic blend of various genres of music. Their songs invite the listener to embark on a journey through popular as well as rare, old and forgotten musical traditions — sonically connecting the sounds of the subcontinent with folklore stories from around the world. 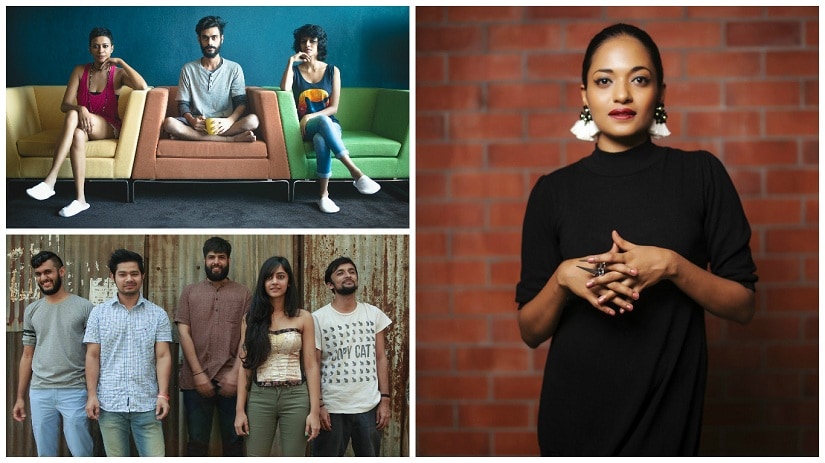 Inspired by Goa Sunsplash Festival, this is a band comprising some of India's finest reggae musicians with an eclectic mix of travelling artists from all corners of the Earth – Bulgaria, Cambodia and Washington DC to name but a few – each of them lending their experience to the sound. Blending musical versatility, instrumental prowess, beautiful vocal harmonies and a premier rhythm section, GRSAS is a reggae/dub band with influences of world music.

Twenty one-year-old Jordan Johnson is an indie-folk rock singer/songwriter with an interesting heritage. Hailing from New Zealand and South Africa, and based in New Delhi, Jordan already has a number of significant musical achievements under his belt – having performed at stages all over the world, including Hollywood, England, Ireland, South Africa, Nepal, Thailand, New Zealand and Singapore. He draws his influence from artists such as John Mayer, Damien Rice, Radiohead and Coldplay.

Karim Ellaboudi, a pianist of Sudanese origin and brought up in London, is known for his immense energy as a performer and his engaging rhythmic sensibilities. This group of artists, in their own words, are “a fun band with a ‘phat horn section’ playing feel-good, danceable Latin and RnB grooves.” Other band members include Vasundhara V, Shirish Malhotra, Ramon Ibrahim, Saurabh Suman, Anand Bhagat and Aron Nyiro. 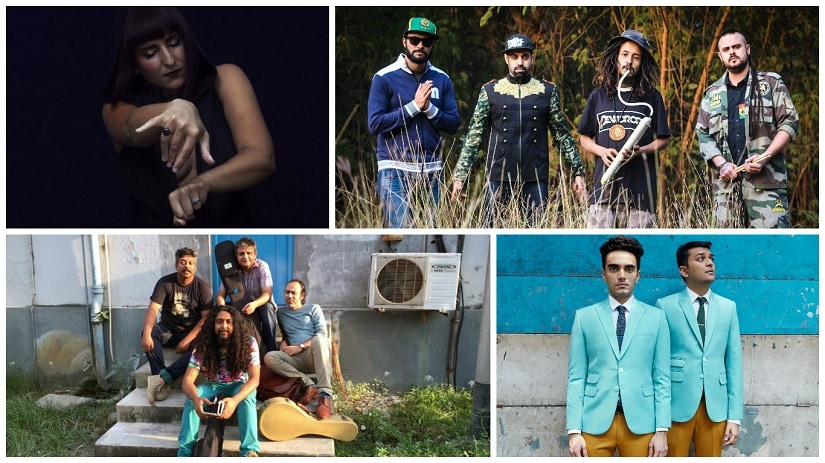 Kimochi Youkai (Japanese for ‘Feel Good Demons’), are five Mumbai-based musicians with a single-minded focus — to make people feel good through their music. With tweaks and twists they rework classics from many genres to create their own unique ambient vibe of groovy happiness. Notwithstanding inherent talent and a flair for performance, all five musicians have been trained at The True School of Music, Mumbai.

Mabassa, in the West African Kongo dialect means twin, or ‘the one who comes as two’. The name represents the musical connection between two musicians from different continents. As a duo, they blend pop music with Brazilian and African influences, creating music to move and connect with people.

Neel Adhikari is a music producer and singer-songwriter from Kolkata, as well as the frontman for the band Neel & The Lightbulbs. He writes 'strange songs about strange things and situations' and there’s a narrative to everything he does, including his acoustic-electro tracks. Having recently moved to Mumbai, he also scores films and web series and has collaborated with a number of Indian and international artists of repute. ZICO is a guitar player and a sound engineer who has worked on some long-term musical projects with Neel. They will be playing on the special Nariyal Paani ferry heading to the festival on 21 January.

Fresh from the international success of their internet sensation single ‘I Love You Baby, I Love You Doll’, the pop duo from Kolkata — Nischay Parekh and Jivraj Singh — are bringing their whimsical sound to Nariyal Paani. Their debut album Ocean comprises “nine glowing tracks of cosmic pop that shimmer like an Indian sunset.” Enough said!

A "freak funk psycho-punk" project from Pune and Mumbai, Run Pussy Run skitters around the edges of freak folk, jazz, funk and satire. Since its formation in 2014 by Gowri Jayakumar and her friends for a music festival, the "kitties" are ready to blast the scene again with their cheeky lyrics, unpredictable rhythmic and harmonic journeys, and a commitment to undisturbed storytelling!

In her new avatar, Suman Sridhar & The Black Mamba perform music off her forthcoming solo album, an international yet rooted sound that is hip-hop, Afro-Indian and neo-soul. Integrating the synchronised chaos of her hometown Bombay, Sridhar raps in English, Hindi, Marathi and sings operatic runs weaving themes of dehumanisation, gender, globalisation, love, ecology. She is accompanied by Joe Panicker (beats, drums) and Maarten Visser (saxophone).

Born in a family of musicians, Ti Rat is a committed and uncompromising singer, and faithful to his beliefs as a disciple of Rastafarianism. Father of a genuine reggae foundation on the east coast of Reunion Island, ‘Rouge Reggae’ is a band he formed with his wife Diane 20 years ago. Today, the whole family perform on stage together, with both their sons joining in the act. Nariyal Paani 2017: Two-day music festival at Alibaug was a treat for the senses Nariyal Paani 2017: Why Alibaug's bohemian music fest is the one you shouldn't miss Nariyal Paani: This weekend, come party in Alibaug with Zoya, Your Chin and Sandunes