Tamil cinema has witnessed a complete shutdown following the outbreak of coronavirus in India. The second biggest film industry in India saw all theatres in Tamil Nadu suspending operations on 17 March, following the Tamil Nadu government order. A week later on 24 March midnight, as Prime Minister Modi called for a 21-day lockdown, the curtains came down on film shootings as well. All post-production work had to stop as well, even for the big summer films. The officials at Central Board of Film Certification (CBFC) regional office in Chennai started working from home, making censoring of films impossible.

Chennai is one of the most prolific film production centres in Asia. Every year more than 300 films, mostly Tamil and/or other Indian languages, are either shot or have their post-production work happening in Chennai. Lakhs of daily wage earners live on this business and its ancillary industries. Producer and distributor G Dhananjayan adds, “Never ever seen this kind of complete shutdown of all wings of the film industry, even during Vishal’s 48-day strike against Digital Service Providers, the theatres were functional. We have never seen anything like the Coronavirus and it will take ages for the film industry to recover.”

The dust is far from settling on the economic impact of the coronavirus pandemic. But early estimates indicate that the blow will be unlike anything Kollywood has experienced before and losses will run into crores. The release of all the summer Tamil biggies that were in post-production — like Vijay’s Master, Suriya’s Soorarai Pottru, Dhanush’s Jagame Thandhiram, Jayam Ravi’s Bhoomi and more than a dozen other medium and small movies scheduled for April and May release — have been pushed indefinitely. The distributors of all these films reportedly want a renegotiation of terms and conditions at the time of its eventual release.

To add to their woes, big tentpole Hollywood and Bollywood films will be fighting over the same release dates in an already overcrowded market. As it stands, the global box office has already taken a hit and lost revenue is estimated to climb to $15 to 20 billion, for April and May. If the crisis continues beyond May, it will be catastrophic.

JSK Films' Satish Kumar, who is also a member of various film associations, points out, “Our industry was anyway on shaky grounds over the last few months due to an earlier economic crisis. The financiers had virtually stopped funding new films and now with the threat and spread of COVID 19, all financiers will clamp down further. Our associations has requested the financiers to waive off interest during the lockdown period. Unless all the heroes and technicians cut down their salaries by a minimum 30 percent, the industry will not be able to survive.”

The industry bigwigs are waiting for the lockdown to be lifted, before making any grandiose announcements. All promotional campaigns for the proposed summer releases have also stopped. A spokesperson of Tamil Film Producers Council (TFPC) says, “Even if the lockdown is lifted, which I doubt, the government won’t open up the entertainment industry immediately due to various COVID19 related issues. We can think of a realistic date only sometime in June or July and it's going to take months to stabilise.”

The Multiplex Association of India has appealed to all landlords and mall owners across the country to waive of rent and CAM for all multiplex operators during the period of closure ordered by the government. This is going to lead to more complications and delay when the government opens up the entertainment sector after the lockdown. PVR Chief Executive Officer Gautam Dutta has said that whenever the theatres reopen they will have to practice social distancing within the cinema by removing one seat between three seats and also sanitising the theatre after every show. Datta made it very clear: “We have to assure our patrons that cinema is as safe an option as anything else to bring back the audiences to the cinemas.”

The buzz is that the top give Kollywood superstars will continue to get work with top producers or they will make their own movies. The idea is that their astronomical salaries, which make 50 to 60 percent of the budget, will be pruned. The mid or lower level actors will find the going tough as they themselves will not be able to attract audiences. Most industry analysts are predicting a 30 to 40 percent fall in box-office collections for big-hero films, while the rest may have to fight for a theatrical release. OTT platforms aren't showing an interest in buying the rights of small and medium films.

A big fall out of the lockdown is that Tamil film financiers will be slow in releasing money for films going forward. A top financier says on the condition of anonymity, “ We have more than Rs 500 Crores locked in the market and our primary aim will be to recover at least our principal amount, as producers associations are putting pressure to waive off the interest during the lockdown.” Once private finances dry up, the number of film productions will reduce drastically, with no guarantee of a theatrical release. Subramaniam, of Chennai’s iconic single screen Kasi Theatres says, “What guarantee do we have that audiences will come back to theatres, especially when so much is happening in the OTT space?” 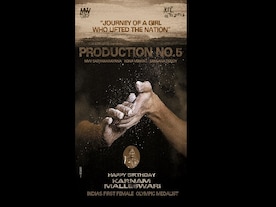 Coronavirus Outbreak: Prithviraj, crew of Aadujeevitham return to India after being stranded in Jordan during lockdown