To be sure, these charges on cash withdrawals and deposits are not new. Some private banks have been charging for high-value cash withdrawals even before. In the aftermath of demonetisation and the Narendra Modi government’s aggressive push to promote non-cash transactions, these banks have either hiked the existing charges or have lowered the cut-off transaction limits. 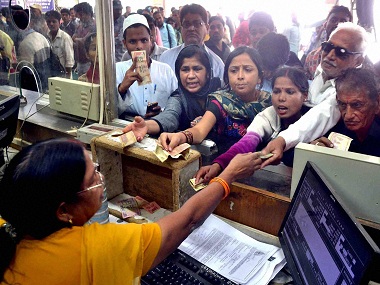 The problem will arise if the fee-income hungry banks start charging cash withdrawal/ deposit transactions in small value also, eventually. This will hurt the common customer since cash is still necessary in a number of areas to transact.

But, the real irony here — in the era of core banking and the digital transactions — is that banks discriminating customers on the basis of in which bank/ city their bank account is present. For instance, according to details on ICICI Bank website, there will be no charge for first four transactions a month at branches in home city while Rs 5 per thousand rupees would be charged thereafter subject to a minimum of Rs 150 in the same month.

For non-home branches, ICICI Bank would not charge anything for first cash withdrawal of a calendar month and Rs 5 per Rs 1,000 thereafter subject to a minimum of Rs 150. Similarly, in HDFC Bank, any transaction above Rs 25,000 will be charged Rs 5 per thousand or a minimal amount of Rs 150 once and for all. But, at a home branch, only if the cumulative cash (deposit and withdrawal) exceed Rs 2 lakh, a transaction charge of Rs 5 per thousand rupees or Rs 150 (plus tax and cess) will be levied. At SBI too, some of its branches do not accept cash deposits beyond a certain amount, say Rs 25000, from non-home branch customers.

Why should a bank punish its customers on the basis of a home branch and non-home branch transactions when bank accounts are operated in core banking mode? Typically, banks give a reason to keep restrictions on cash transactions (even in public sector banks) from a customer from other branches of the same bank citing the KYC issue. The logic is that the home branch would know the background of the customer better and hence can take more informed decisions on their transactions.

But, the point is, in the era of core banking this distinction is absolutely unnecessary. For instance, if a young customer has his home branch in one city and if he/she is currently based in another place for employment purpose, obviously the person cannot go to home branch to perform the cash transaction to avoid non-home branch customer fees. The very idea of bringing in core banking into the system itself was to make banking possible from anywhere/anytime. This discrimination on cash transaction levy goes against the spirit of this idea. Banks must stop punishing non-home branch clients.