New Delhi: Finance Minister Arun Jaitley on Thursday staunchly defended the demonetisation drive, saying 'prophets of doom' have been proven wrong as hard data of two years shows an increase in tax base, greater formalisation of the economy and India retaining the fastest growing economy tag for the fifth year in a row.

On the second anniversary of the shock note ban, Jaitley wrote a Facebook blog 'Impact of Demonetisation', listing an 80 percent jump in income tax return filers to 6.86 crore, increase in digital transactions and more resources being available for poor and for building better infrastructure as the main achievements.

With depositing junked currency in banks only mode left to liquidate holding of old 500 and 1,000 rupee notes, the government was able to track down people holding cash beyond their known sources of income.

"The enormity of cash deposited and identified with the owner resulted in suspected 17.42 lakh account holders from whom the response has been received online through non-invasive method," he wrote. 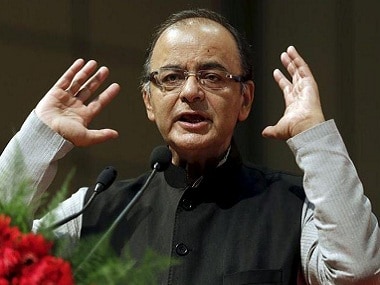 Since the money came into bank accounts, the holders were forced to file income returns, which went up from 3.8 crore in May 2014 to 6.86 crore.

"By the time the first five years of this government are over, we will be close to doubling the assessee base," he said.

Responding to criticism from opposition parties, Jaitley said India clocking the fastest growth rate has proved "prophets of doom", who had predicted that demonetisation will shave off 2 percent of growth rate, conclusively wrong.

Opposition parties led by Congress launched a scathing attack on the government, with former Prime Minister Manmohan Singh terming demonetisation as an "ill-fated" and "ill-thought" exercise, whose "scars and wounds" are more visible on the second anniversary of the "economic misadventure".

Questioning the rationale behind note ban, Delhi Chief Minister Arvind Kejriwal termed it as "a self-inflicted deep wound" on the Indian economy.

Joining the chorus, West Bengal Chief Minister Mamata Banerjee alleged that the demonetisation move was initiated for the benefit of a handful of people, saying the common men were the worst sufferers.

Responding to the criticism, Jaitley said demonetisation has strengthened the economy and increased the government resources to fund poverty alleviation and infrastructure development programme.

"What has happened to prophets of doom who said India's GDP will decline by at least 2 percent. For the fifth year running India will be the fastest growing (large) economy in the world. It is continuing to happen. So prophets of doom have been proved wrong and conclusively proved wrong," he later told reporters here.

"Even when there was global stress, we still manage to have respectable growth rates and we had the courage because of leadership of the Prime Minister that we took decisive steps and these steps which are not economically correct, which have helped the system in the long run; and the long run, in this case, does not mean generations," the finance minister added.

He said that demonetisation has favourably impacted tax system, digitisation and formalisation of the Indian economy. "Of course, there is a long distance we still have to cover and I am certain in the coming years the advantage of these movements in the right direction will strengthen the economy."

The Union minister further said with the implementation of the goods and services tax (GST), it is now becoming increasingly difficult to evade the tax system and the indirect tax to gross domestic product (GDP) ratio has gone up to 5.4 percent post-GST, from 4.4 percent in 2014-15.

On the criticism that almost the entire cash money got deposited in the banks post demonetisation, Jaitley said the proposition is "ill-informed" as confiscation of currency was not an objective of demonetisation.

The Narendra Modi-led government on 8 November, 2016, demonetised high-value currency notes of old 500 and 1,000 rupee notes, constituting 86 percent of the currency in circulation.

"Getting it into the formal economy and making the holders pay tax was the broader objective. The system required to be shaken in order to make India move from cash to digital transactions. This would obviously have an impact on higher tax revenue and a higher tax base," Jaitley said.

While those depositing cash in excess of their known sources of income faced punitive actions, larger deposits improved the lending capacity of the banks. Also, a lot of this money was diverted to mutual funds for further investments and it became a part of the formal system, Jaitley added.

Demonetisation, Jaitley said, has helped in formalising the economy, expanding the tax base and earmarking more resources for the poor and infrastructure development.

He said the share of the indigenously developed payment system of unified payments interface (UPI) and RuPay cards has reached 65 percent of the payments done through debit and credit cards.

As many as 86.35 lakh new filers were added this year.