Belfast: Northern Ireland's Democratic Unionists were in talks Friday to become kingmakers by lending British Prime Minister Theresa May enough backing for a parliamentary majority — support that throws the spotlight on the party's deeply right-wing outlook.

DUP leader Arlene Foster said she had spoken with Conservative leader May and would start talks on propping up the party, declaring that keeping Northern Ireland in the United Kingdom would be "our guiding star". 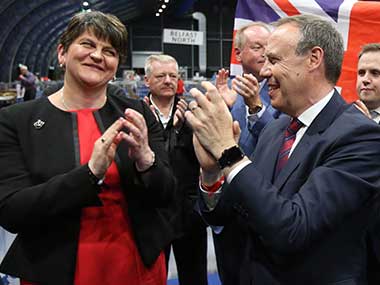 "We will enter discussions with the Conservatives to explore how it may be possible to bring stability to our nation at this time of great challenge," Foster told a press conference in Belfast.

The DUP holds just 10 seats in the British parliament but this would be enough to give May's Conservatives a working majority. The precise nature of the relationship they are targeting is not yet clear.

"We will continue to work with our friends and allies in the DUP," May said as she began to formulate her new government.

"Our two parties have enjoyed a strong relationship over many years, and this gives me the confidence to believe that we will be able to work together in the interests of the whole United Kingdom."

The DUP now finds itself centre stage — a long way from its foundation in 1971 by firebrand Protestant evangelical preacher Ian Paisley to defend Northern Ireland's union with Britain against demands for a united Ireland.

Early in his political career, the colourful cleric became a byword for bigotry and intolerance of Catholics.

The party is now more secular and attracts a wider demographic than when it was founded, shifting from fundamentalist outsider to political pragmatists.

However, its roots are apparent in its vehement opposition to gay marriage, abortion and Irish language rights.

And although it has a female leader, it remains an overwhelmingly male, white bastion and is certainly more conservative than the Conservatives.

Foster did not elaborate on the DUP's wish list of concessions but it will likely try to extract more money from the central government for public services in Northern Ireland.

The party will also probably seek more guarantees for agriculture post-Brexit to assuage the concern of farmers after the current deal runs out in five years' time.

The DUP, however, will have to contend with the new political realities in Northern Ireland where concern about Brexit and the possible return of a hard border with the Republic of Ireland have raised fears.

In Thursday's election, the DUP won 10 of Northern Ireland's 18 seats in the 650-member British parliament.

Sinn Fein does not take its seats in the British parliament, with MPs refusing to swear allegiance to the British head of state, Queen Elizabeth II. This is the first time since 1964 that there will be no nationalist representation in the Commons.

In the South Belfast constituency won by the DUP, voters expressed dismay at the obliteration of the centre ground.

Liam Kennedy, 64, a history professor at Queen's University, said the result had "crystallised the reality of politics in Northern Ireland".

"Instead of peace we have confrontation by other means," he said.

Office worker Christina Kelly, 38, described the result as "not exactly an ideal situation" but said it would likely focus more attention on Northern Ireland and particularly how Brexit would affect the region.

"I voted for a person who I thought would fight for a better deal for Northern Ireland and although the DUP campaigned to leave, some voice in government will surely be better than none."

The DUP and Sinn Fein, the two largest parties in Northern Ireland, are due to resume talks on Monday to form a regional government after power-sharing collapsed in acrimony in January.

The distraction of ongoing negotiations in London and the strength of the vote for each party in Thursday's election will do little to encourage compromise, according to political analysts.