Erdogan meets Modi: India must remain firm, focus on trade and investments even with albatross Pakistan

Turkish President Recep Tayyip Erdogan is in Delhi on a state visit to India. In an interview to an Indian TV channel a few days prior to the trip, Erdogan spoke about India’s desire to become a member of the Nuclear Suppliers Group (NSG) and the expansion of the United Nations Security Council (UNSC). His views highlighted some basic differences in Indian and Turkish approaches and the congruence of Turkish and Pakistani positions. 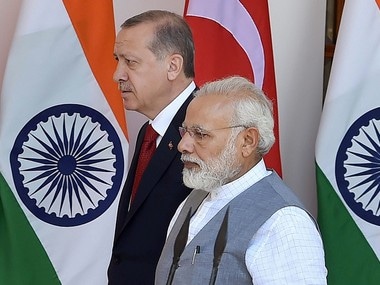 More significantly, Erdogan emphasised the need to find a solution to the Jammu and Kashmir issue, stressed the importance of India-Pakistan dialogue, praised his “good friend” Pakistan Prime Minister Nawaz Sharif and spoke of the possibility of multilateral negotiations on J&K. There was no hint of a reference to Pakistani sponsored terrorism. All this basically reflects what Pakistan has urged the international community on J&K.

Interestingly, this is not the first time that Turkey has caused India difficulties just before a state visit. A few weeks prior to the state visit of its then President Abdullah Gul in 2010, Turkey decided not to invite India to a regional conference on Afghanistan that was held in Istanbul. It did so at Pakistan’s insistence. This caused great unhappiness in Indian official circles and some senior officials strongly felt that Gul’s visit should be postponed if not cancelled. However, this view was considered too drastic. During the discussions, Gul was firmly told that no country could disrupt India’s ties with Afghanistan. The message went home. The Istanbul conference evolved into the Heart of Asia process. India is its full partner and chaired its last conference which was held in Amritsar last December. Firmness and patience pay.

Why did Erdogan then express views that could only embarrass his Indian hosts? The fact that Pakistan-Turkey ties have always been close is well known. But can that alone explain Erdogan singing Pakistan’s tune on the eve of a trip to India? While this is a factor, the fact is that the Turkish President is now brimming with confidence.

Erdogan has recently won a narrow victory in a popular referendum which has changed the Turkish constitution to invest the Presidency with vast executive powers. He has dominated Turkey’s public life for over a decade and a half as prime minister from 2003 to 2014 and thereafter as president. In this process, he has successfully ended the Turkish army’s role as the arbiter of Turkish politics; he quelled a half-hearted military last year. The army considered itself as the upholder of Kemal Attaturk’s secularism and Euro-centric approach. However, Erdogan’s inspiration seems to stem from the Ottoman Sultans even though he defines his policies within the terms of Turkish conservatism. Perhaps all this makes him feel that he can intervene in sensitive international issues.

Prime Minister Narendra Modi could not have been pleased with Erdogan’s gratuitous comments on J&K nor by his openly equating India and Pakistan in the NSG context though his reiteration of Turkey’s position on UNSC reform is a part of the country's overall policy and not solely caused by its concern for Pakistan. However, Modi seems to have taken the Turkish president’s comments in his stride and focussed on what India and Turkey can do bilaterally in different fields, especially in trade and investments. Modi is especially keen to have Turkish private sector's participation in infrastructure. Modi also focussed on terrorism which he said is a common threat faced by both countries.

There is merit in Modi’s approach. Turkey and Pakistan’s relations are solid and will not get diluted in the near future. This does not mean that India should not pursue bilateral ties. As Ruchi Ghanshyam, the new Secretary (West) in the Ministry of External Affairs said, “On their own footing”. Indeed, this is how the diplomatic game should be played.

Turkey is an important regional country and has a significant geostrategic location. It is playing an important if controversial, role in West Asia and aspires to become a global player. However, Turkey is disappointed that it has made little headway with joining the European Union, and now with Erdogan’s increasing disregard for European values, it is impossible for Europe to accept Turkey. In this background, it is in India’s interest to keep bilateral ties going while recognising that Turkey and India are far apart on many international and regional issues such as in West Asia. For instance, Turkey is implacably opposed to the continuation of Bashar al-Assad as Syria’s President while India continues to have good ties with him.

While building bilateral ties, the Turks have to be firmly informed that India will never accept any third party mediation on J&K, and therefore, it is pointless for them to comment on the issue at all. Also, they have to be made to understand that the Indian public finds such remarks unacceptable. Hence, such comments are not conducive to building bilateral ties. For instance, on Monday when the Pakistan army mutilated the bodies of two Indian jawans Erdogan’s remarks praising Nawaz Sharif in his interview to the Indian TV channel only reveal his lack of understanding that it is the army in Pakistan that makes security policy decisions and that Nawaz Sharif is an impotent spectator.

Neither Modi nor Erdogan made any reference to the NSG issue. This reveals that no agreement was reached on it. That Turkey will stand by Pakistan in this matter is obvious. India has to factor this in as it pursues the NSG objective.

Notwithstanding the personal chemistry between Erdogan and Modi which the former’s advisors claim is very good, India and Turkey may move ahead on trade and investments but Pakistan will remain an albatross in the relationship.