Islamabad: Pakistan signed new deals with China on Saturday worth nearly $500 million ahead of Beijing's international forum on its "Silk Road" trade and infrastructure initiative for Asia, Africa and Europe, the Pakistani government said.The memorandums of understanding add to $57 billion already pledged for the China-Pakistan Economic Corridor (CPEC), a network of rail, road and energy infrastructure that is part of the wider Chinese project also known as One Belt-One Road.

The deals came as Pakistani Prime Minister Nawaz Sharif met Chinese President Xi Jinping ahead of the Beijing summit expected to be attended by leaders from at least 29 countries to promote Xi's vision of expanding trade links.Delegates in Beijing will hold a series of sessions on Sunday to discuss the plan in more detail, including trade and finance.Proposed in 2013 by Xi, the project is broad on ambition but still short on specifics. 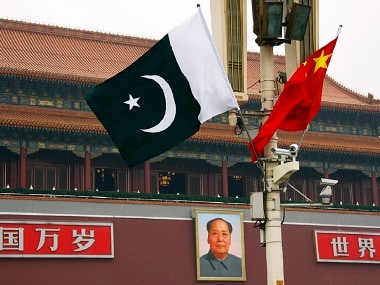 Pakistan has been a flagship country and one of the most enthusiastic supporters of the One Belt-One Road initiative, in part because many projects are for power plants to alleviate the country's decade-long energy-shortage crisis that sees frequent blackouts.

"China-Pakistan Economic Corridor is a core component of your visionary initiative of the "One Belt-One Road," Sharif told Xi when they met at the Great Hall of China on Saturday, according to the Associated Press of Pakistan.

Among the 3.4 billion RMB ($493 million) in deals Sharif's office said were signed on Saturday were: "Two cooperation agreements worth 2.3 billion RMB ($333 million) for an airport in the southwestern town of Gwadar, site of a deep-water port that is to provide an outlet to the Arabian Sea from the far western Chinese province of Xinjiang.* Establishment of the Havelian Dry Port in Pakistan.

"Agreement on economic and technical cooperation (1.1 billion RMB) ($160 million) for the East Bay Expressway linking Gwadar to Pakistan's existing highway system.China says that between 2014 and 2016, its businesses signed projects worth $304.9 billion in Belt and Road countries.

Some of the projects could be in development for years. Some countries are wary of the debt burden that the Chinese financing could create.Pakistan, however, has expressed an optimistic view, with the government's chief economist telling Reuters this week that the repayments will peak at around $5 billion in 2022, but will be more than offset by transit fees charged on the new transport corridor.