"By challenging China over the Taiwan question, India is playing with fire," state-run Global Times said in an op-ed article titled 'New Delhi will suffer losses if it plays Taiwan card'. 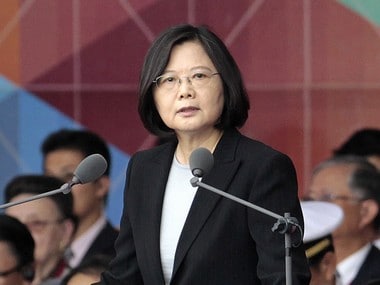 "At a time when new US President Donald Trump has put the brakes on challenging China over the Taiwan question, agreeing to change course and respecting the "one China" policy, India stands out as a provocateur," the tabloid daily, which is a part of Communist Party of China's publications, said.

"High-level visits between India and Taiwan are not very frequent, so why did India invite the Taiwan delegation to visit at this time?" the article asked referring to Taiwanese MPs delegation. It is the first such visit since the Taiwanese President Tsai Ing-wen administration took office, it said.

Tsai, who won on elections last year is a strong supporter of Taiwan's independence from China.

"Some Indians view the Taiwan question as an Achilles' Heel of the mainland. India has long wanted to use the Taiwan question, the South China Sea and Dalai Lama issues as bargaining chips in dealing with China," the article said.

"It stubbornly misinterprets the flagship project of the One Belt, One Road Initiative that will benefit countries along the route, including India. As the corridor passes through the disputed Kashmir, some Indian strategists have advised the Modi government to play the Taiwan card," it said.

To India, the island can not only help realise some of India's development goals, but also, strategically, check the mainland.

Growing Taiwanese investment in India, including in steel, telecom and information technology sectors, are important to Prime Minister Narendra Modi's "Made in India" campaign, it said.

"Although the mainland is a major trading partner of India, political discord and the historical feud make economic cooperation between the two difficult," the article said.

"Tsai is exploiting India's vigilance and strategic suspicions against China. The pro-independence leader came up with the new southbound policy" to ramp up trade and economic interactions in Southeast Asia, South Asia and Oceania, in which India is considered not one of the, but the most" important country," it said.

"India wants benefits from the development of trade with Taiwan and Taiwanese investment. But it should be wary of Tsai's political intentions and avoid being used to confront the mainland," it said.