The MeerKAT captured high-quality imaging of a galaxy called PKS 2014-55 800 million light-years away.

It was known that some galaxies emit X-shaped radio waves from black holes. But the reason remained a mystery till South African satellite MeerKAT captured high-quality imaging of a galaxy called PKS 2014-55.

Now, a team of astronomers from South Africa and the US have cracked the puzzle using clear images sent by MeerKAT from the galaxy 800 million light-years away.

Upon observation, the ‘X’ galaxies were found to be actually of a ‘double boomerang’ shape, according to the South African Radio Astronomy Observatory (SARAO). 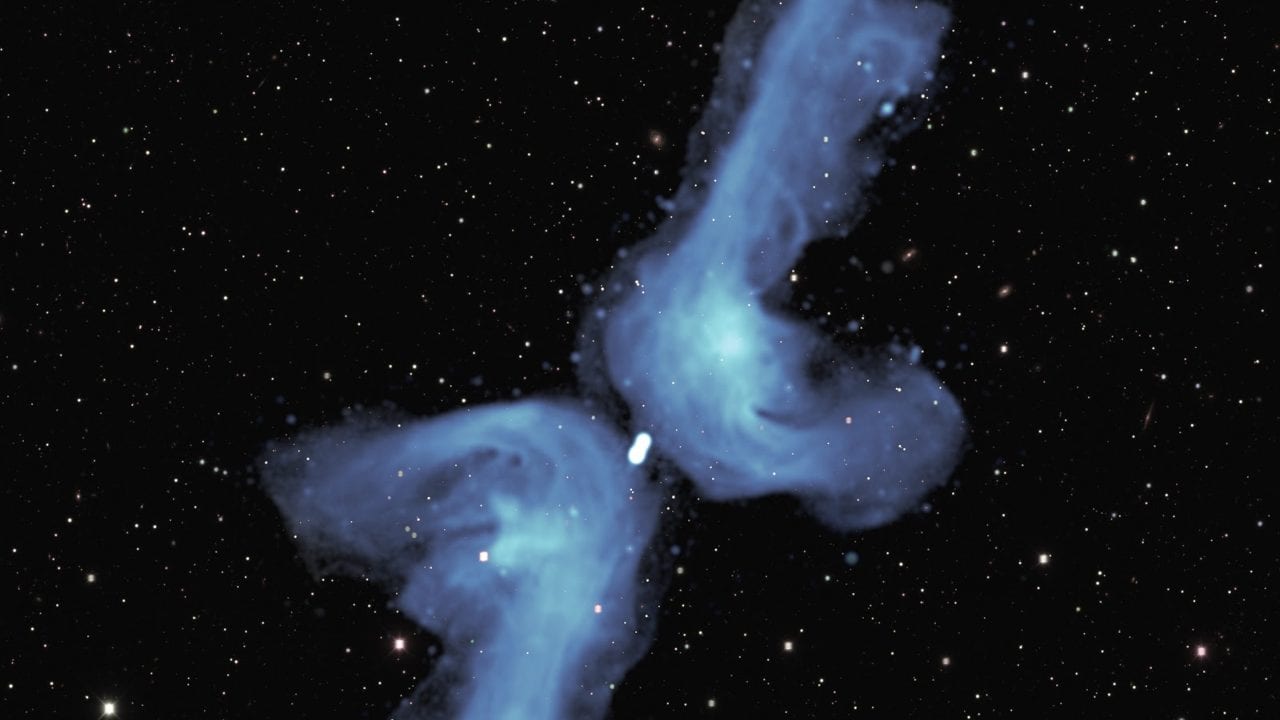 The galaxy PKS 2014-55, located 800 million light years from Earth, is classified as ‘X-shaped’ because of its appearance in previous relatively blurry images. The detail provided in this radio image obtained with the MeerKAT telescope indicates that its shape is best described as a ‘double boomerang’. Image credit: NRAO/AUI/NSF; SARAO; DES.

It also released a picture where two powerful jets of radio waves of blue colour can be seen extending up to 2.5 million light-years into space. The study revealed that these structures eventually turn black due to the “pressure of tenuous intergalactic gas”.

There were several reasons thought to be behind this phenomenon. One of them was that there was some “material falling back into the galaxy” which was being “deflected into different directions” that formed the two other arms of the ‘X’.

The latest study proved this theory to be correct. This was because the images of PKS 2014-55 showed material “turning the corner” as it flowed back towards the host galaxy.

The contribution of the MeerKAT satellite is undisputed, the scientists opined. “MeerKAT was designed to be the best of its kind in the world. It’s wonderful to see how its unique capabilities are contributing to resolving longstanding questions related to the evolution of galaxies,” said Bernie Fanaroff, former director of the SKA South Africa project that built MeerKAT and a co-author of the study.

The observations were carried out by a team from SARAO, the (US) National Radio Astronomy Observatory (NRAO), the University of Pretoria and Rhodes University.

The results will be published in the journal ‘Monthly Notices of the Royal Astronomical Society’.

Germany apologizes for leopard jibe that upset some Africans