Quadrantids, the first meteor shower of 2019, to peak before dawn tomorrow in India

The odd and beautiful display of shooting stars will peak just after New Years on 4 January 2019.

One of the most beautiful displays of "shooting stars" will peak several hours from now in the early hours of 4 January.

There won't be as much visibility of the meteor shower from India as Europe or North America, but it's possible to catch a glimpse of the blue-tailed cosmic spectacle nonetheless — if you know what to expect.

The 'Quadrantid' (pronounce: KWA-dran-tid) meteors are the first annual meteor showers of 2019.

As Space.com puts it perfectly, paraphrasing Forrest Gump, "The Quadrantids are like opening up a box of chocolates — you never know what you're going to get." The "Quads" really are notoriously unpredictable, but there's some amount of luck involved in spotting them.

To make sure you're prepared, and spot them at their peak, here's everything you should know about the Quadrantids.

What are the Quadrantids?

The Quadrantid meteors or "Quads" are among the oddest meteor showers known to us.

They were discovered fairly recently in 2003 and have a very short peak period of a few hours, unlike the Perseids or the Orionids which last for days.

Interestingly, the constellation that the Quads were named after no longer exists.

When the Quads were first spotted in 1825, the meteors appeared to stream away from a point in the sky that appeared in a constellation called the Quadrans Muralis. This constellation falls between the constellations Draco the Dragon and Boötes the Herdsman in a star map – just near the handle of the famous Big Dipper. How to triangulate the Quadrantids. Image courtesy: AMS Meteors

The International Astronomical Union prepared a list of constellations in 1922, a list in which Quadrans Muralis was neither elected, nor included.

Since 2003, the real origin of the Quadrantids has become ever so slightly clearer.

Most meteor showers come from comets that have broken apart, and the source of the Quadrantids is now believed to be an asteroid called the '2003 EH1', which is believed to be an extinct comet or a "rock comet."

Where to spot the Quadrantids?

For the Quadrantids, as with any meteor shower, the bulk of meteors are visible when the radiant is high in the sky. The streaks of meteors' trails come away from the northern tip of Boötes, near the Big Dipper's extended handle, close to the Arcturus star — the brightest in the Boötes constellation.

To find the radiant, or the place of origin of these meteors, trace Boötes or Arcturus.

An alternative way to spot the Quad meteors is to first spot the Big Dipper constellation towards the Northeast direction in the sky. 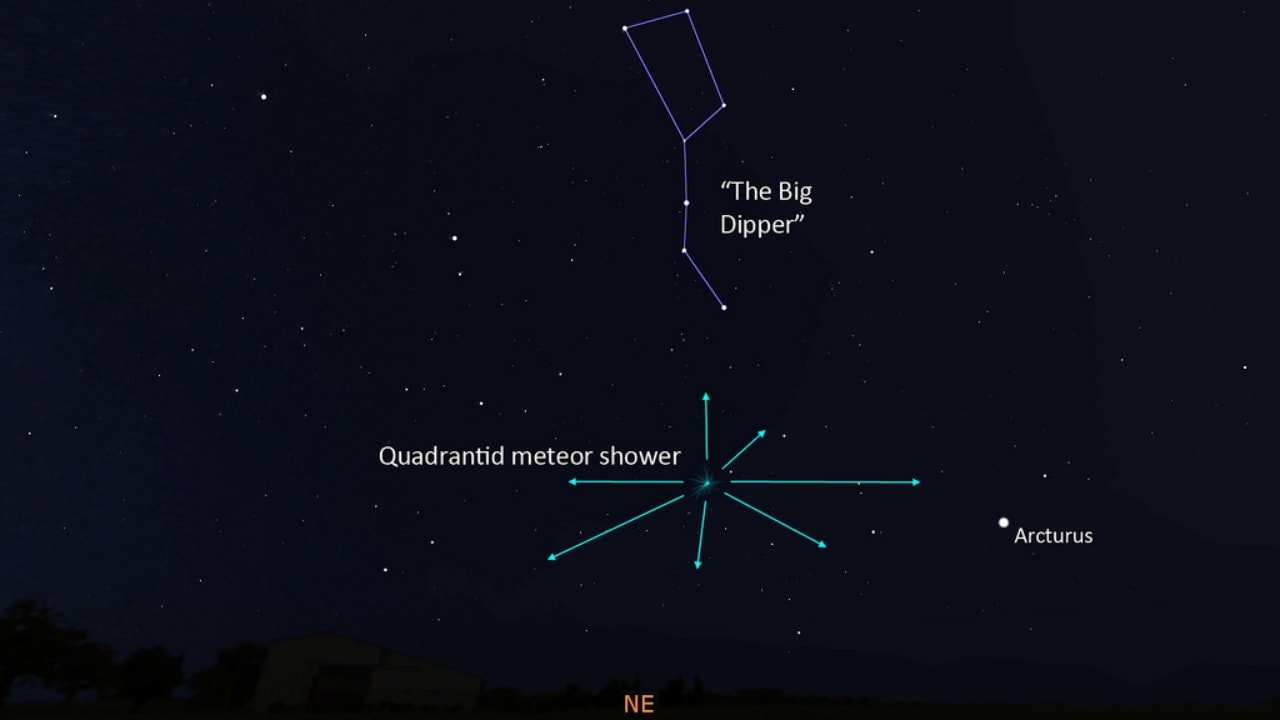 The position of the Quadrantids meteor shower relative to the Big Dipper and Arcturus. Image courtesy: Space

Then, trace "arc" of the Big Dipper's handle to another visible star — a red giant called Arcturus that anchors the bottom of the Boötes constellation.

When to watch the Quadrantids?

The radiant for the Quadrantids is the highest point in the sky in the darkest hour before dawn on 4 January in India, with the maximum visibility around 4 am in the morning, just between twilight and sunrise. In Europe, the peak hour for meteor shower sightings has been predicted for 2 am UTC (7.30 am IST) by the International Meteor Organisation.

Know that meteor showers are notorious for defying even the best-laid forecasts, so your best bet to spot them is to simply stay prepared and stay patient.

How to watch the Quadrantids Being the first major meteor shower of 2019, the Quadrantid meteor shower will likely be at its best in the hours between midnight and dawn on 4 January, EarthSky says.

Fortunately, their timing in 2019 coincides with the absence of moonlight, which means dark skies and better chances of spotting the meteors.

Meteor showers to watch out for in 2021: From Perseids, Geminids to Quadrantids