By using AI to do an initial analysis of the data after it's collected but before it's sent to Earth, NASA can optimise what they receive which increases the scientific value of missions.

NASA has stepped closer to allowing remote onboard computers to direct the search for life on other planets. Scientists from the NASA Goddard Space Flight Center (GSFC) have announced first results from new intelligent systems, to be installed in space probes, capable of identifying geochemical signatures of life from rock samples.

Allowing these intelligent systems to choose both what to analyse and what to tell us back on Earth will overcome severe limits on how information is transmitted over huge distances in the search for life from distant planets. The systems will debut on the 2022/23 ExoMars mission, before fuller implementation on more distant bodies in the solar system. 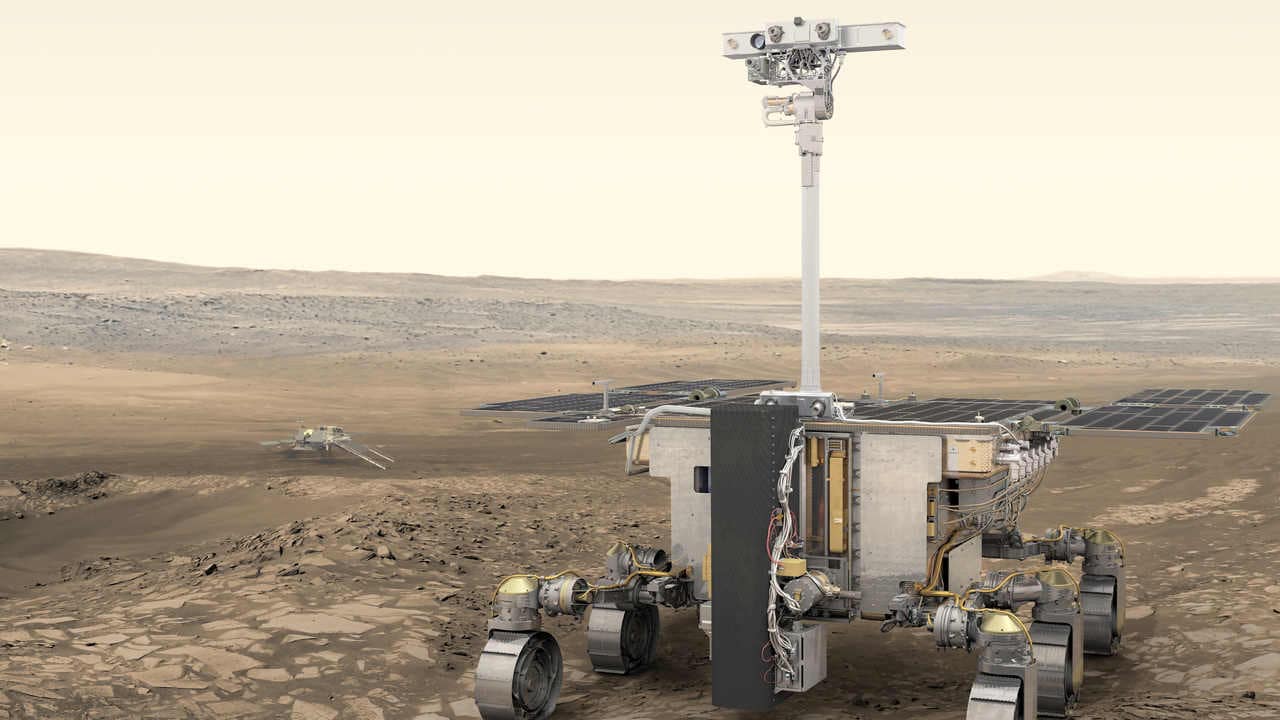 ESA’s ExoMars rover (foreground) and Russia’s stationary surface science platform (background) are scheduled for launch in July 2020, arriving at Mars in March 2021. The Trace Gas Orbiter, which has been at Mars since October 2016, will act as awill act as a relay station for the mission, as well as conducting its own science mission. Image credit: ESA

Presenting the work at the Goldschmidt Geochemistry Conference, lead researcher Victoria Da Poian (GSFC) said, "This is a visionary step in space exploration. It means that over time we'll have moved from the idea that humans are involved with nearly everything in space, to the idea that computers are equipped with intelligent systems, and they are trained to make some decisions and are able to transmit in priority the most interesting or time-critical information."

Eric Lyness, software lead in the Planetary Environments Lab at NASA GSFC, emphasised the need to have smart instruments for planetary exploration: "It costs a lot of time and money to send the data back to Earth which means scientists can't run as many experiments or analyse as many samples as they would like. By using AI to do an initial analysis of the data after it is collected but before it is sent back to Earth, NASA can optimise what we receive, which greatly increases the scientific value of space missions."

Victoria Da Poian and Eric Lyness have trained artificial intelligence systems to analyse hundreds of rock samples and thousands of experimental spectra from the Mars Organic Molecule Analyser (MOMA), an instrument that will land on Mars within the ExoMars Rosalind Franklin Rover in 2023. MOMA is a state-of-the-art mass spectrometer-based instrument, capable of analysing and identifying organic molecules in rocks samples. It will search for past or present life on the Martian surface and subsurface through analysis of rock samples. The system to be sent to Mars will still transmit most data back to Earth, but later systems for the outer solar system will be given autonomy to decide what information to return to Earth.

First results show that when the system's neural network algorithm processes a spectrum from an unknown compound, this can be categorized with up to 94% accuracy and matched to previously seen samples with 87% accuracy. This will be further refined until being incorporated into the 2023 mission.

Victoria Da Poian continued: "What we get from these unmanned missions is data, lots of it; and sending data over hundreds of millions of kilometres can be very challenging in different environments and extremely expensive; in other words, bandwidth is limited. We need to prioritize the volume of data we send back to Earth, but we also need to ensure that in doing that we don't throw out vital information. This has led us to begin to develop smart algorithms which can for now help the scientists with their analysis of the sample and their decision-making process regarding subsequent operations, and as a longer-term objective, algorithms that will analyse the data itself will adjust and tune the instruments to run next operations without the ground-in-the-loop, and will transmit home only the most interesting data."

The team used the raw data from initial laboratory tests with an Earth-based MOMA instrument to train computers to recognize familiar patterns. When new raw data is received, the software tells the scientists what previously encountered samples match this new data.

Eric Lyness said: "The mission will face severe time limits. When we will be operating on Mars, samples will only remain in the rover for at most a few weeks before the rover dumps the sample and moves to a new place to drill. So, if we need to retest a sample, we need to do it quickly, sometimes within 24 hours. In the future, as we move to explore the moons of Jupiter such as Europa, and of Saturn such as Enceladus and Titan, we will need real-time decisions to be made onsite. With these moons, it can take 5 to 7hours for a signal from Earth to reach the instruments, so this will not be like controlling a drone, with an instant response. We need to give the instruments the autonomy to make rapid decisions to reach our science goals on our behalf."