A relatively complete skeleton of a long-necked, long-tailed plant-eater excavated from a rocky cliff above a Tanzanian river is providing insight into the early evolution of a dinosaur group that later included Earth’s largest-ever land animals.

Scientists on 13 February announced the discovery of fossils of a dinosaur called Mnyamawamtuka moyowamkia that measured roughly 26 feet (8 meters) long, weighed about one ton, lived between 110 and 100 million years ago and was an early and comparatively small member of the group called titanosaurs.

Titanosaurs, which walked on four pillar-like legs, first appeared earlier in the Cretaceous Period, perhaps 125 million years ago. By the time an asteroid impact caused a mass extinction that doomed the dinosaurs 66 million years ago, titanosaurs had achieved staggering dimensions. For example, Argentina’s Patagotitan was about 120 feet (37 meters) long and weighed 70 tons. 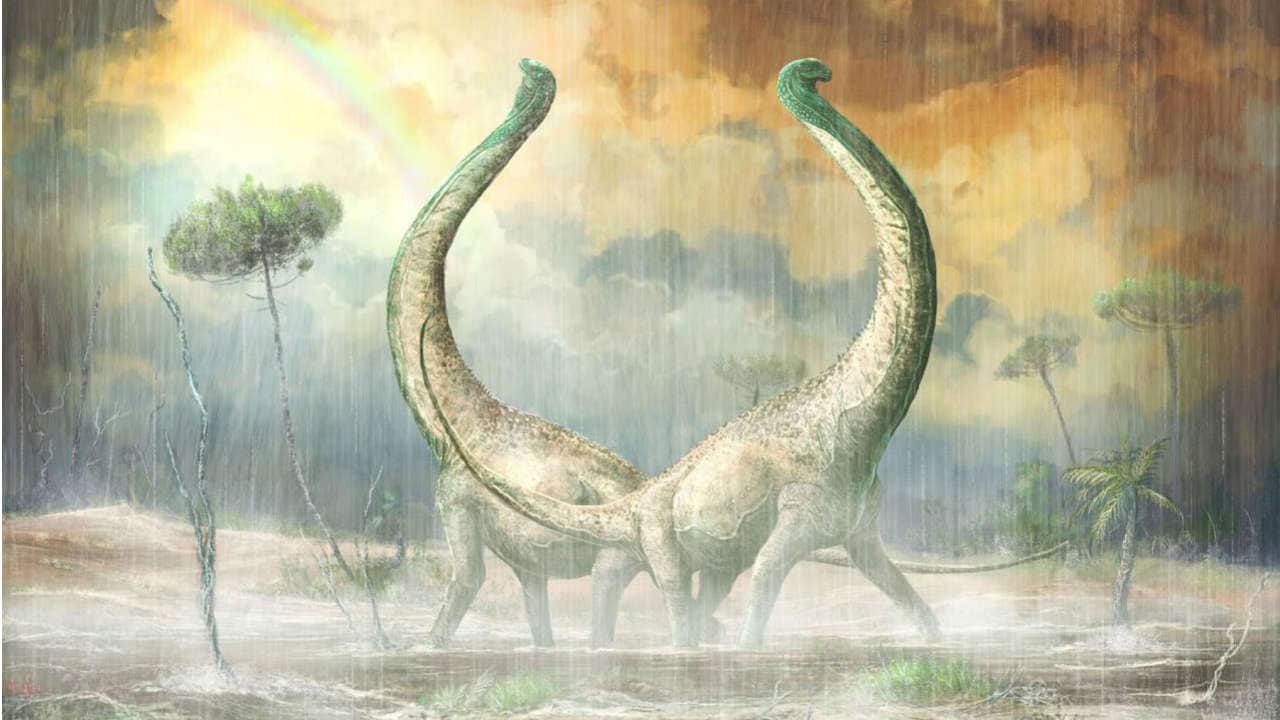 The Cretaceous Period dinosaur Mnyamawamtuka in its environmental setting is seen in this illustration. Image: Reuters

“Mnyamawamtuka is important as it is a relatively complete animal from the early part of the titanosaurian diversification. Thus, it provides a critical look at the group before the widespread diversification around the planet,” Ohio University anatomy professor Patrick O’Connor said.

Mnyamawamtuka means “beast of the Mtuka” because it was unearthed near the Mtuka River bed in southwestern Tanzania.

“This excavation was fairly involved, as the fossils were discovered eroding out of a vertical cliff surface about 20 feet (6 meters) above the dry river bed,” O’Connor said.

“At first, we worked merely to stabilize the falling rock and fossils, with later efforts involving climbing ropes and teams of skilled excavators. It is a fantastic setting, with monkeys, a variety of hornbills and other birds, every type of insect under the sun, complete with a very cool dinosaur skeleton,” O’Connor added.

Some of the approximately 60 identified titanosaur species are known only from scrappy remains. Scientists have 45 percent of Mnyamawamtuka’s skeleton - pretty good, as dinosaur fossils go — including numerous vertebrae, front and hind limb bones, ribs and teeth, but not its skull.

One distinctive trait was the slight heart shape of Mnyamawamtuka’s tail vertebrae, which “perhaps played a role in stiffening the tail from side-to-side,” O’Connor said.

“It was not fully grown yet, as evidenced by unfused parts of the skeleton. So, we are not sure of the maximum adult size at this point,” O’Connor said.

Mnyamawamtuka lived in a warm, semi-arid setting in what is now southern central Africa.

The research, backed by the US National Science Foundation, was published in the journal PLOS ONE.