Researchers all over the world are pioneering techniques for making delicious and nutritious meat.

June 2018 was a big month for environmentalism in India. Spurred into action by the sheer, suffocating burden of waste created each year, the Maharashtra government implemented a ban on all single-use plastics in the State.

In the same month, Prime Minister Narendra Modi pledged to eliminate all single-use plastic in the country by 2022, with an immediate ban in urban Delhi.

These were big, bold statements to target a massive problem, coming on the heels of global popular movements to reduce waste in our landfills and our oceans. And many of these movements seem to have found their focal point in a particularly visible culprit — the plastic straw. From Starbucks to street vendors, businesses all over the world are commendably transitioning away from single-use plastics, particularly the straw.

An activist carries a globe with the land masses represented by "meat" after a demonstration by animal rights group 'People for the Ethical Treatment of Animals' (PETA) in Mumbai. Reuters

Clearly, sustainability is having a moment. If you couple these efforts to clean up our oceans with the agenda to reduce greenhouse gases through energy transformation and through incentivising the manufacture and sale of electric vehicles, it’s also clear that India is walking the walk when it comes to meeting climate and sustainability goals.

On Earth Day 2019, it’s worth celebrating the fact that we’re playing a leading, vocal role in embracing the Paris Climate Agreement (opened for signature on this day in 2016), and the Sustainable Development Goals. It’s the kind of vocal leadership which builds international goodwill and strengthens our position in the world. The one question which remains to be asked is — is it enough?

One particularly high-leverage area where governments are yet to make sufficiently bold moves is the global food system — in particular, the supply of meat and other animal-sourced foods. And if we don’t invest in upgrading meat now, we could undo all the excellent work being done in other areas over the next decades.

The meat production system is broken

Quite simply, the meat production system is broken. It presents tremendous challenges for the environment, for public health and for food security. One system, three very big problems — and all due to one simple, underlying truth: we eat animals who eat plants.

The modern industrial animal farming system is a marvel of technology, but it simply cannot transcend this one primitive truth. Chickens, which are among the most widely consumed animals in the world, take in roughly nine calories of crops such as corn and soy to give us one calorie of meat. This despite being relentlessly optimised as a source of protein over the course of decades, in highly industrialised feeding operations such as those in the US. This means nine times as much land, nine times as much water, nine times as much fertiliser as what would be needed if we just used crops for human consumption. 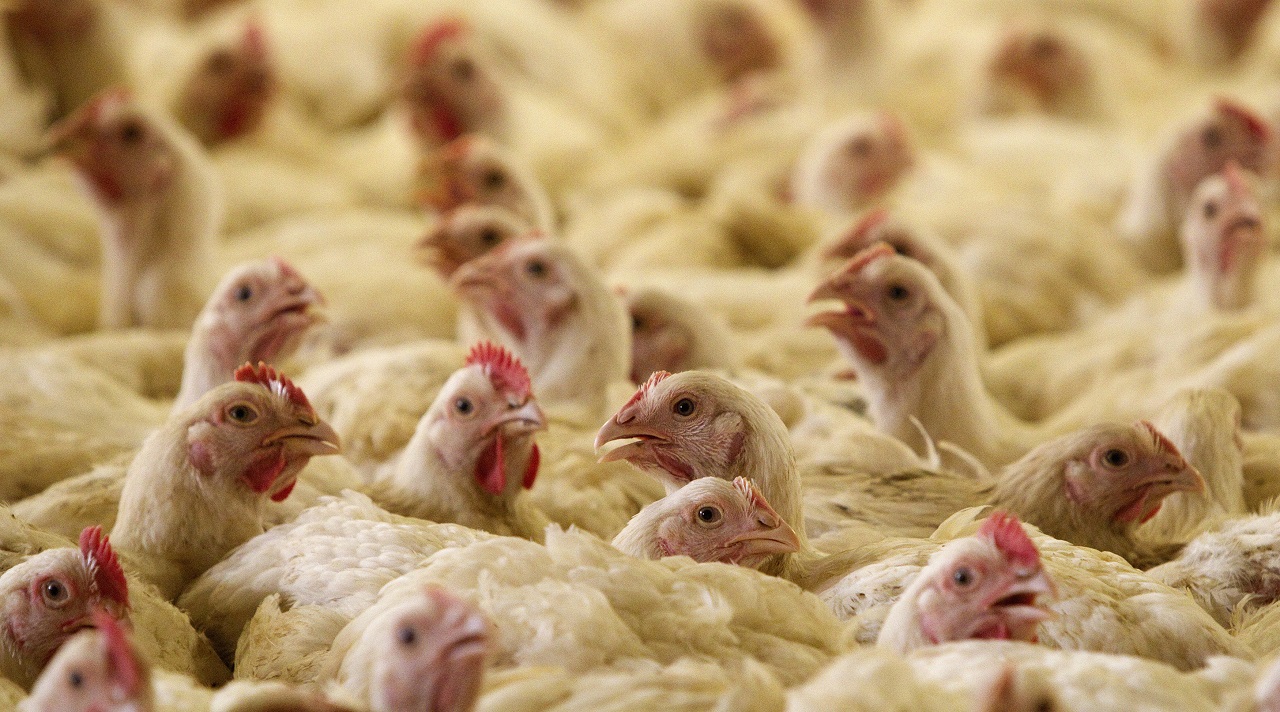 Chickens are among the most widely consumed animals in the world and consume nine calories of crops to give one calorie of meat. Image: Reuters

What’s perhaps even more alarming are the greenhouse gas emissions from raising animals such as chickens and cattle. Those admirable, urgent efforts to transform our transportation system? They could be undermined by building up an industrial agriculture system which contributes more to climate change than all emissions from transportation combined. That’s all planes, trains and automobiles on the planet.

This is precisely why United Nations’ scientists state that raising and killing animals for food is “one of the major causes of the world’s most pressing environmental problems, including global warming, land degradation, air and water pollution, and loss of biodiversity.” If we don’t want to be caught asleep at the wheel, governments all over the world, including India, should focus on building a new protein production system as soon as possible. (Oh, and those plastic straws? Bloomberg News estimates that they account for roughly 0.03 percent of total plastic waste by mass in the oceans, while another study showed that fully 46 percent of debris in the oceans comes from abandoned fishing equipment.)

The land and water requirements, climate change effects and loss of ocean biodiversity involved in global meat and seafood supply are especially unconscionable when you account for India’s growing population and tremendous challenges of malnutrition. But none of this changes the fact that people want to eat meat.

Global meat and seafood demand continue to rise to record levels every year. In fact, much of the growth in demand for poultry and other animal-sourced foods over the next decades will likely come from places like India, China and sub-Saharan Africa, as incomes continue to rise and the industrialisation of meat supply chains continues. If we want to continue playing a leading role in the Sustainable Development Goals and Paris Climate Agreement, more visionary action is warranted.

So how do we feed the world sustainably? How do we nourish 9.7 billion people by 2050 — over one-sixth of whom will be in India! — through systems which do not entrench food insecurity and climate change?

The likely answer — give them meat and seafood, just made in a better way. Researchers and companies all over the world are pioneering techniques of making delicious, nutritious meat, without the same effect on the planet. These foods take the form of two separate categories — plant-based meat and cell-based meat. As the name suggests, plant-based meats are made from plant-based ingredients such as grains and legumes, but look, taste and feel just like their animal-based counterparts.

These are not your grandparents’ veggie burgers or soya chunks. They’re leveraging decades of food science and the fact that everything in animal meat — amino acids, lipids, minerals, water — can be obtained from plants.

US-based Beyond Meat’s burgers are made by food scientists, plant biologists, chefs and other culinary experts, from ingredients like pea protein, beetroot and coconut oil, but they’re capturing the imagination and the palates of meat lovers everywhere. When Bill Gates, who is now an investor in the company, first tried Beyond Meat’s chicken strips, he said, “What I was experiencing was more than a clever meat substitute. It was a taste of the future of food.” Encouragingly, Tyson Foods — the US’s largest meat producer — also invested in the company.

Beyond Meat’s burgers are made by food scientists, plant biologists, chefs from ingredients like pea protein, beetroot, and coconut oil. Image: Beyond Meat

Beyond Meat has since gone from strength to strength — they’re sold all over the world and are currently gearing up for an initial public offering of shares of over $100 mn on the Nasdaq, at a valuation of over $1 bn. And they’re not the only ones showing that good for the planet can meat good for the business.

Impossible Foods, another US-based, globally-offered plant-based meat company, has served their own Impossible Burgers at Davos and recently won the ‘Best of the Best’ award at the Consumer Electronics Show in Las Vegas in 2019, beating out the latest phones and televisions. And the most heartening news of all? Environmental life cycle assessments of Impossible Foods and Beyond Meat show that replacing conventional meat with these comparable plant-based meats reduces greenhouse gas emissions by at least 89 percent, water use by at least 87 percent, and land use by at least 93 percent.

That’s a huge win courtesy of some humble plants. For those who insist their meat come from animals, though, other advancements in food and biotechnology offer promise. The most promising of these — cell-based meat — involves taking a sample of cells from an animal and growing it in a clean manufacturing facility, without the faecal matter and waste which pervades animal slaughter facility. The resulting product is biologically identical to animal meat, but early analyses indicate tremendous advantages in land, water and energy use requirements. 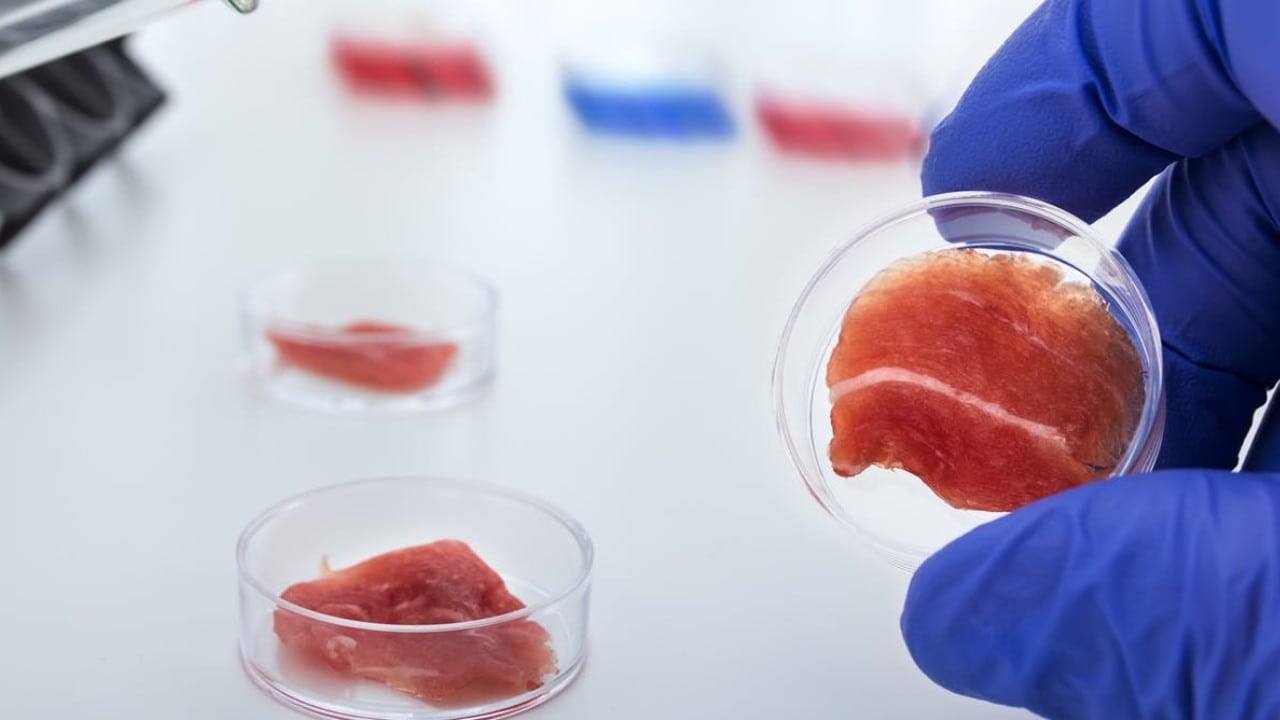 Meat grown in a lab.

Currently, over two dozen companies globally are working on cell-based meat products. Billions in investment and decades of research into the methods of regenerative medicine and tissue engineering have provided them with an accelerated path to market — and nobody knows this better than Vijayawada-born, Mayo Clinic trained-cardiologist Dr Uma Valeti.

India's role in the future of food

So what is India’s role in this bold new future of food?

Governments have begun to wade in too. Canadian politicians have said they’d like the prairie provinces of Manitoba and Saskatchewan to supply the world’s plant protein needs, Singapore has dedicated over $50 mn to cell-based meat research, and the Government of Maharashtra has given its blessing to a cell-based meat research centre at Institute of Chemical Technology, Mumbai. If we’re truly going to effect a transformation in global protein supply, though, these are mere appetisers compared to the billions that have been pumped into renewable energy and electric vehicles. Staying on track for the Sustainable Development Goals will require a far greater investment and India can play a central role in these efforts.

We need to upskill our scientific and engineering talent pool. We need to encourage our ingenious entrepreneurs, our robust biomedical industry and our big food ecosystem to seriously consider this incredibly exciting sector. We need to wake up to our potential to supply the world’s demands for plant protein for plant-based meats, through diverse indigenous ingredients such as pulses and millets. The potential payoff is huge. We could further bolster agricultural transformations offering our farmers lucrative end-markets, become a manufacturing hub for the future of food, compete for global supply chains and drive down the price of delicious, nutritious, sustainable protein.

In short, we could leapfrog industrial animal agriculture for a food system which is better for people, planet and profit. It’s time for governments in India and around the world to get on board and make bold moves securing our future. Earth Day would be a very good day to start.

The author is the Managing Director for India at the Good Food Institute (GFI), where he is focused on building the future of food by working with scientists, foundations, governments, entrepreneurs, and corporations to advance the plant-based and cell-based meats sector.

Here are some of the other stories in our Earth Day 2019 series:

Buddha Purnima: Sale and slaughter of meat banned in Bengaluru