The Moto E6s is worth buying if you want plenty of storage on a budget, but there are better options. The display is good and cameras aren't half bad, but battery life and performance fall a little behind that of the competition.

There are a tonne of options right now if you search for a smartphone under 10k. The market has been, quite frankly, dominated by Xiaomi and Realme from the past few months with phones like Redmi 7 (Review), Realme 3 Pro (Review) and more. And in an attempt to keep up with the fierce competition, Motorola has launched the Moto E6S.

Motorola dabbled in the budget-friendly price segment a long time ago and has quite a handful of smartphones in the space now, the most recent being the Moto G7.

The Moto E6s, which debuted at IFA 2019 as the Moto E6 Plus, is a decent smartphone at a price point of just Rs 7,999. But let us get one thing straight, this phone isn’t exactly a head-turner if that's what you were expecting. Moto E6S is priced at Rs 7,999 and comes in Mirror Grey and Cranberry Red colour variants.

Let’s delve a little deeper to understand why.

The Moto E6s comes in two colour variants – Cranberry Red and Mirror Grey. I happen to have the Grey variant. The smartphone comes with a chrome finish and it has a very shiny and mirror-ry look on a plastic back panel. But guess what? It might look good to you from a distance but once you hold the phone, the number of fingerprint smudges it picks up will turn that shiny back into an ugly mess in no time. And it is really difficult to get rid of those smudges. By the time I was done with the phone, it looked very tacky. You can use a cover, you say? Although, the company was thoughtful enough to include a transparent silicon back cover in the box itself, the bad news is that since the Moto E6s comes with a removable battery, every time I tried to take off the cover on the phone, the removable plastic back panel came out with it. Every. Single. Time.

Other than this, the device has a waterdrop notch on the display and a pretty thin bezel with a slightly bigger chin.

On the camera front, Motorola has ditched its favourite circular camera module and instead opted for a capsule-shaped dual camera placed neatly at the top left corner. Below the camera setup you will find the LED flash. You will also see a fingerprint sensor at the back with the company logo on it. The placement of the fingerprint sensor did not feel right to me since it took me a while to make my way to it without actually looking for it. Placing it a little lower would have been better, though maybe my hands are just that tiny. With the curved edges and its low weight, the smartphone is quite easy to hold though.

Moving on to the display, the 6.1-inch HD+ Max Vision IPS display with a resolution of 720 x 1560 pixels does justice to all the money that you will spend on this device. The display shows vivid colours with appropriate brightness levels. A night light option is also available that will let you use the phone in dimly lit surroundings without actually straining your eyes. 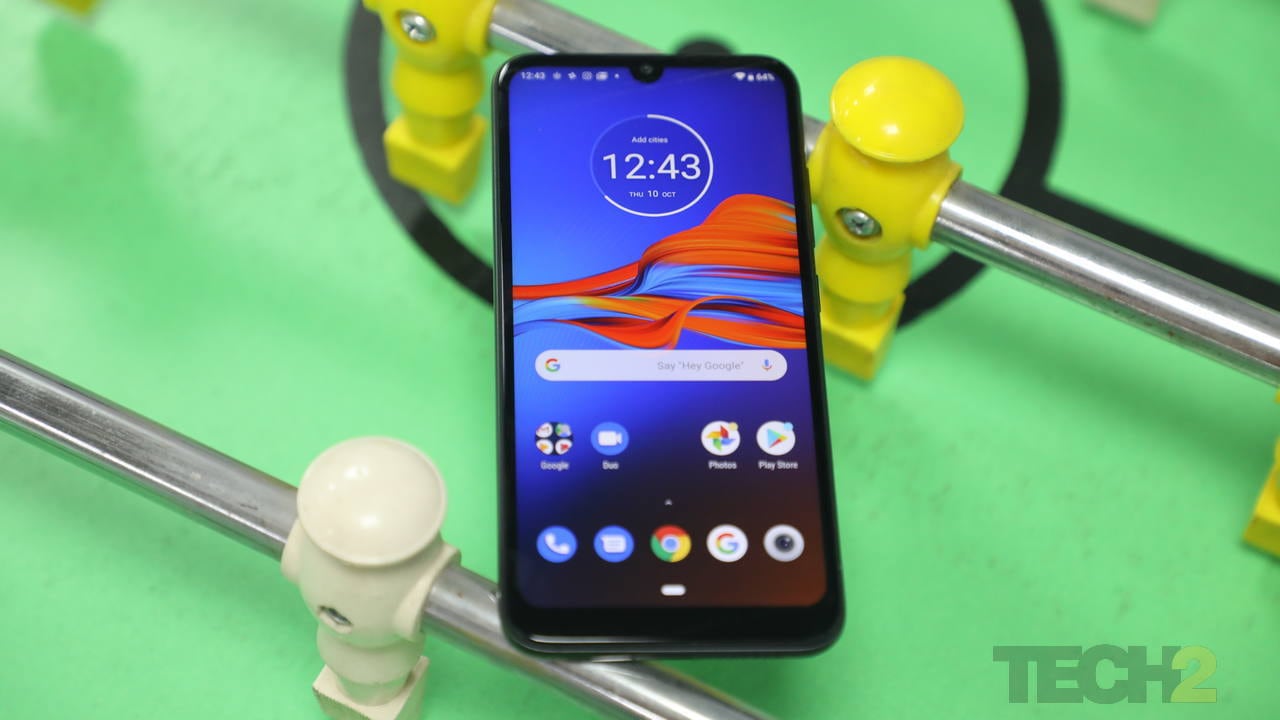 The audio quality of the phone is also great and paired with that great display, you will really enjoy watching videos on the phone. Oh, and there’s is a 3.5 mm headphone jack mounted at the top of the device. Face Unlock feature is slow as compared to fingerprint sensor.

This smartphone also comes with a face unlock feature that sort of works, but I will recommend that users opt for fingerprint unlock instead. Face unlock is not fast and it doesn’t work in low light, understandable given that the system is not secure and only uses the selfie camera.

Moving on to the battery, you just get a 3,000 mAh unit. Thankfully, it lasts for at least a day and you won’t experience any problem on the battery front. As for charging, I must say it charges very slowly. I’m also a little sad that there’s no Type-C port, given that others have already started providing one.

Motorola bundles a 10 W charger with the phone.

Could have done better in the camera department

In the camera department, it comes with an 8 MP selfie camera that captures good pictures. The images clicked in well-lit areas capture good colours and seem sharp, but once you zoom in, details fade away. You also get options like AI beauty mode, blur mode, and paranoma mode with this camera. The smartphone comes with a dual camera setup at the back.

On the back, there is a dual-camera setup that includes 13 MP + 2 MP cameras. If you click pictures in natural light, the camera captures some really good images with vivid colours and average details. Although it does take a while (almost 5-8 seconds sometimes) to adjust its focus, so that does get a little annoying.

To check the original quality images clicked by this smartphone, click here. As with all budget phones, low-light photography sucks. The phone also doesn’t include a night mode. And even with the LED flash, I wasn’t impressed by the picture quality as images lacked clarity, details, and everything that makes a picture worth looking at.

(L-R) Redmi 8A, Moto E6S, Redmi 8. While the image captured by Redmi 8A is dull, Moto E6S does a good job by giving good quality images.

(L-R) Redmi 8A, Moto E6S, Redmi 8. Here the best image is captured by Redmi 8 where you can see the clarity, colour and sharpness.

I know it is too much to expect from a phone that is so affordable, but the thing is, the Moto E6s camera falls flat when compared to other smartphone cameras in this price segment.

The phone offers 4 GB RAM and 64 GB of internal storage, which is pretty impressive at this price point. If we talk about the performance of the phone, it runs on stock Android and is powered by a MediaTek Helio P22 chip. You can swap between apps, make calls, and watch videos quite smoothly. But when it comes to gaming, it takes a while to load most games. But again, the phone manages to give a satisfying performance. I will not recommend it for users who are into heavy gaming. Moto E6S is not meant for heavy gaming.

It is a dual SIM smartphone that offers one nano SIM slot and one normal SIM slot. If you want to use nano SIMs in both slots, the company has also provided an adapter that you can use.

Coming back to what I started with — the Moto E6s is an okayish phone but it’s no head-turner. The screen is great and it’s nice to get 4 GB RAM and 64 GB storage, but phones like the Redmi 8 offer a lot more, including a Type-C port and a 5,000 mAh battery, for a slight bump in price. If you are a little tight on budget, you can go for Moto E6s as it isn’t that bad a deal, but I will still recommend spending the additional Rs 1,000 and going for the Redmi 8 instead.