This 2018 model raises the bar yet again, providing exceptional performance in a premium package that’s worth every rupee you’ll spend on it. For whatever reason, the Windows world has found it virtually impossible to steal the Ultrabook crown from Apple. There have been several valiant attempts, but it’s only in these last few years that we’ve seen some of those attempts bear fruit, offering worthwhile competitors to Apple’s MacBooks. 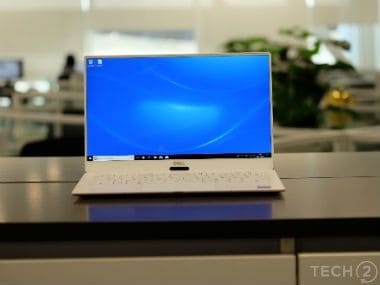 I’m certainly not saying that Apple’s Ultrabooks are better than anything else out there, far from it. However, the fact remains that Apple’s MacBooks have managed to define the Ultrabook in the same way that its iPhone defines the smartphone.

There are a few notable challengers though, and chief among them is Dell with its brilliant XPS 13. It’s always been a great laptop and a no-brainer for anyone wanting a Windows-based Ultrabook, but these last couple of years have seen competition really ramp up. The likes of the Lenovo Yoga 920, HP Spectre 13, LG Gram and even the Razer Blade have proven to be formidable opponents.

Where the XPS 13 once led the pack, it was now fighting neck-and-neck with the rest of the crowd. It’s possible for this reason that Dell decided to take things up several notches with the 2018 Dell XPS 13.

More than anything, the standout feature on the XPS 13 is its size. It’s tiny. Almost indescribably so. Yes, it has a 13-inch screen, but it could easily hide behind most 12-inch devices. Hell, I could place a 12.9-inch iPad Pro on top of it and you’d wonder where the laptop went. The super-slim bezels are the reason this laptop is so small. I suspect that the device’s screen-to-body ratio would rival that of most smartphones.

Despite its form factor, though, the XPS 13 is noticeably thicker than similarly priced devices, including the gorgeous Lenovo Yoga 920 Vibes Edition laptop. The large “legs” at the bottom of the device contribute to this. While it may not look as slim as other laptops in its class, do bear in mind that the laptop is slim enough that you won’t care. 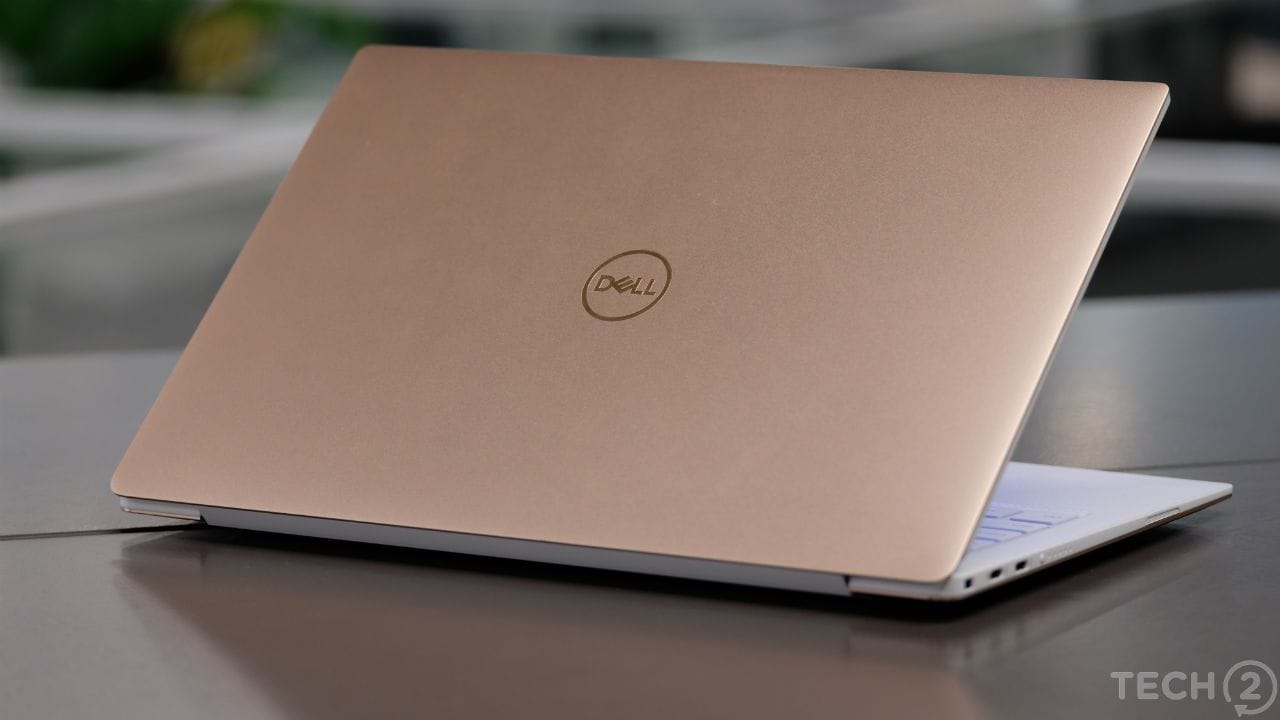 The XPS 13 model I received for testing came in a combination of Rose Gold and Alpine White. Image: Tech2/Anirudh Regidi

The XPS 13 model I received for testing came in a combination of Rose Gold and Alpine White, and while I’m definitely NOT a fan of Rose Gold, the fibreglass Alpine White interior certainly won me over. There is a more traditional black and silver option for those who prefer it.

Unlike traditional laptops, the Alpine White interior surfaces of the device aren’t made from metal, plastic or carbon fibre. They are, in fact, made from titanium oxide-coated fibre-glass. This is a very unusual material to find on any laptop but is quite clearly a contributor to the laptop’s low weight (about 1.2 kg).

That titanium oxide I mentioned earlier? It’s for keeping that pristine Alpine White, well, pristine. It’s a stain resistant coating that is surprisingly effective. Dell claims that you can write on the surface with a ball-point pen and you’d see no stain. The outer metal surface and the interior fibre-glass work together to create a laptop that is as light as it is solid. My one complaint and a very tiny one at that is that the XPS 13 fails the raise-the-display-with-one-finger test. You need two hands to open the device. The webcam is placed at the bottom of the display. Image: Tech2/Anirudh Regidi

Another issue is the webcam placement. It’s still at the bottom of the display and it’s still pointed up your nose. I get that there was no other place to put it, but as you’ll see later on in the performance section, the placement causes several issues.

The keyboard and trackpad were great, as expected. The keyboard uses chiclet-style keys with low travel. The keys are very responsive and I had no complaints in the 10 days or so that I spent with the device. 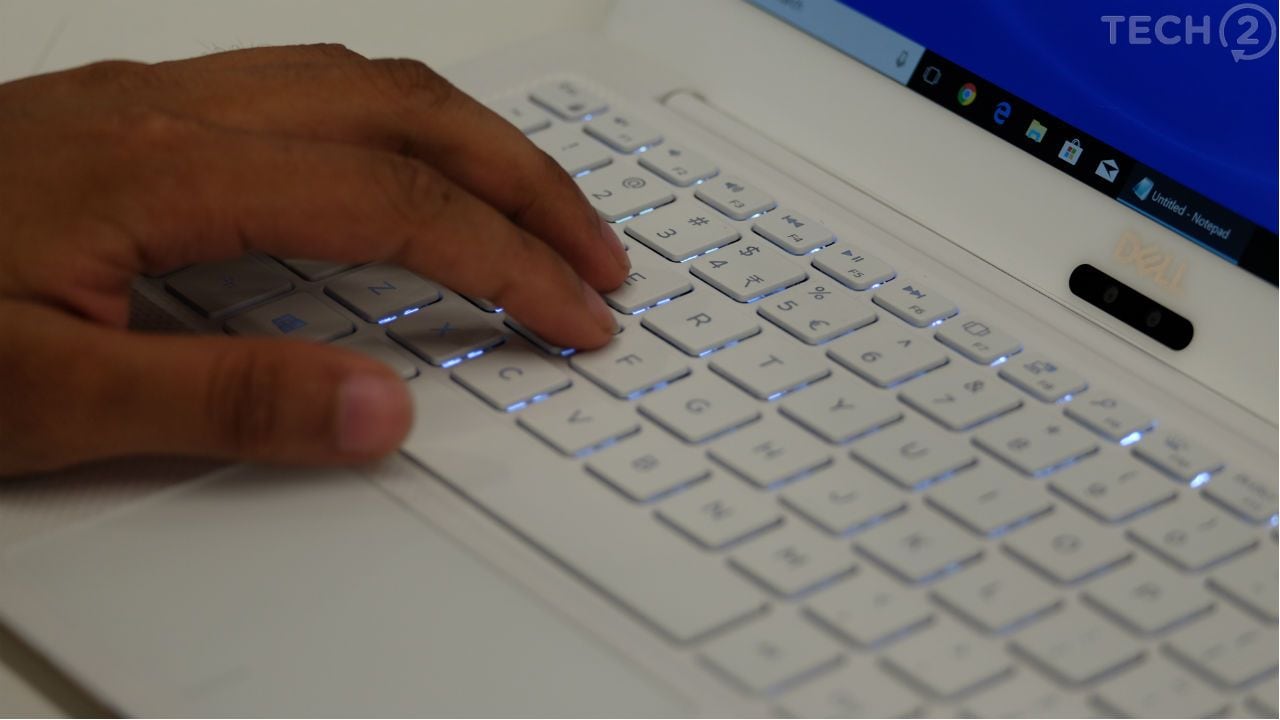 The keys are very responsive and I had no complaint with the 10 days or so that I spent with the device. Image: Tech2/Anirudh Regidi

After getting used to the MacBook’s massive trackpad, any Windows laptop trackpad feels tiny, and the XPS 13’s is no exception. That being said, it’s adequate for the device, and being a Precision Trackpad, is more than up to the task. Touch input was great on the 4K display that I reviewed.

Normally with a laptop, I’d only list off the specs here. It’s usually a boring list of hardware that only the geekier among us would be interested in. The short version is that the XPS 13 is running the very best hardware in its class —Intel Core i7-8550U, 16 GB RAM, 512 GB SSD — and as long you’re not gaming, you’ll be fine. With the 2018 model of the XPS 13, however, things are a little more interesting.

First, there’s that fibreglass finish on the Rose Gold model. It’s an unusual finish that gives the laptop an interesting texture when using. It feels warmer and more welcoming than the plain metal if that makes sense.

Second, Dell says they’re using 'Gore Thermal Insulation' to insulate the internals of the device. Normally, Ultrabooks end up getting so hot that they’re uncomfortable to use on my lap. On poorly designed devices, even the palm rest gets hot. With the 'Gore Thermal Insulation', Dell is able to insulate the base and the palm rest from much of the heat generated by the laptop’s internals, and as a result, the device is more comfortable to use for extended periods of time.

Dell, like Apple, has opted for a USB-C-only design. This is a frustrating and user-hostile decision that literally makes no sense on any laptop. Image: Tech2/Anirudh Regidi

The port selection is the only place where I have some complaints. Dell, like Apple, has opted for a USB-C-only design. This is a frustrating and user-hostile decision that literally makes no sense on any laptop. Just about every device and cable in the market uses USB-A ports and I cannot fathom why manufacturers insist on using only USB-C. Quite simply, my pen drives, hard drives, ethernet adapters, memory card readers and my phones cannot connect to the XPS 13 without a dongle. The XPS 13’s saving grace lies in the fact that at the very least, a USB-C to USB-A dongle is included in the package. Among the ports included there is also a microSD card reader. Image: Tech2/Anirudh Regidi

Windows Hello is supported via a Hello-compatible webcam and a fingerprint reader embedded in the power button.

I love the display on the XPS 13. It’s not as colour-accurate and precise as the MacBook Pro 13’s P3-certified panel, but it’s bright, vibrant and very sharp. Consuming content on that screen was a pleasure, and the HDR-mode (which isn’t true HDR, if you’re wondering), did noticeably boost image quality when viewing HDR content. As far as Windows-based laptops go, the XPS 13’s display is by far the best I’ve tested. 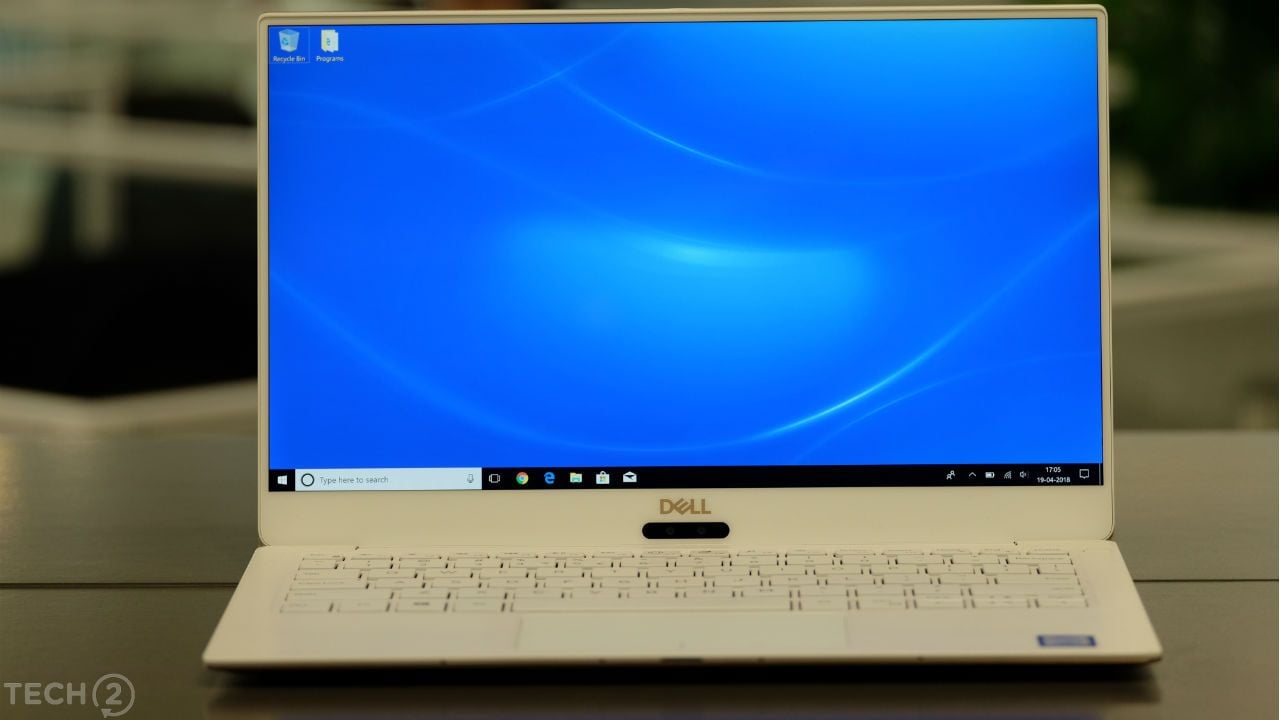 It’s not as colour-accurate and precise as the MacBook Pro 13’s P3-certified panel, but it’s bright, vibrant and very sharp. Image: Tech2/Anirudh Regidi

For the more technically-minded though, I’d like to point out that the MacBook Pro’s display is still a class apart.

My review unit came with a UHD HDR display that’s claimed to offer 400 nits of brightness and a contrast ratio of 1,500:1.

UHD refers to a widescreen 4K resolution. This is fast becoming the norm for premium laptop displays and it ensures that content looks great on those tiny screens. HDR refers to High-Dynamic Range. Traditional displays are 8-bit displays. In total, an 8-bit display is capable of displaying 16.7 million colours. A true HDR display is a 10-bit display and is capable of displaying 1.07 billion colours. The Dell XPS 13’s display isn’t a true HDR display, but then again, neither are the bulk of the HDR-rated displays on the market. This includes phones, TVs and laptops.

The Dell XPS 13 complies with Windows’ HDR specs. A Dell engineer explained to me that to be rated as HDR-ready, a laptop needs to comply with the following specs:

This is interesting because these specs are pretty average. Pick up any decently-priced laptop from eBay or Amazon, and it’d be sure to comply with these specs.

On the XPS 13, I found that the laptop delivered a brightness of 413 nits and a contrast ratio of about 777:1. The brightness is at least 30 percent higher than average and the contrast ratio, while very good, is nowhere near Dell’s claimed contrast ratio and still a far cry from the highest we’ve ever measured (1,100:1). The display colour gamut also measured 90 percent sRGB, which is good, but not great. For reference, a MacBook Pro 13 is rated at 100 percent DCI-P3, which is about 140 percent sRGB. In other words, a MacBook Pro can show off a wider range of colours.

Again, the XPS 13 still has the best overall display quality that I’ve seen on a Windows device so far, so don’t take that display lightly.

If there’s one area where the XPS 13 well and truly shines, it has to be on the performance front. In our benchmarks, the XPS 13 routinely scored significantly higher than its rivals. Intelligently designed insulation and cooling ensure this. In several of the tests, the laptop was a full 30 percent faster than its competition.

In real-world use, this translates to a device that responds instantly. The onboard storage was a bit confusing. With a 3,000 Mbps read speed and 480 Mbps write speed, the XPS 13’s SSD is fast, but it’s not as fast as that of the competition. Still, a 480 Mbps write speed is very fast and you’ll have no complaints on the performance front.

The side-firing speakers were quite loud and I could easily watch videos without straining to hear the sounds. As mentioned earlier, don’t think about gaming on the device. It doesn’t have a graphics card.

Windows Hello—biometric login for Windows 10—works great most of the time. While the fingerprint sensor was always reliable, the odd placement of the webcam meant that I’d have to keep tilting the laptop at odd angles to let it detect my face. When it worked, Face Detection was flawless and fast.

Our standardised battery life test rated the XPS 13 at 4 hours and 10 minutes. This is very good by our standards and is the second-highest battery life we’ve measured yet. The winner pipped the XPS 13 by 20 minutes, but that winner was an under-powered Surface Pro 5 running a lower resolution screen on last year’s best hardware. In my daily usage, I found that the XPS 13 could easily last me a full workday (about 8 hours), which involves two email accounts on sync (via Mail), heavy Slack and Telegram usage (desktop apps) and Chrome as the primary app (with several dozen tabs open at any given time). Throw in some light Photoshop and Word usage and you have a picture of my daily usage. This is certainly commendable for such a powerful device.

If you’re looking for the best Ultrabook in India, you only have one option, and that’s the Dell XPS 13. This 2018 model raises the bar yet again, providing exceptional performance in a premium package that’s worth every rupee you’ll spend on it. This devices truly is a compact powerhouse.

Personally, I’d rather opt for the slightly larger Lenovo Yoga 920 Vibes Edition laptop over the XPS 13, but that’s only because I prefer the latter’s larger screen. However, the XPS 13 is, without question, the better laptop, and one I’d heartily recommend to all.

Kurup movie review: Takes too long to get to the point, but stays interesting once it gets there. Plus there’s DQ!

Book Review | The Hindutva paradigm stands on its own, doesn’t need Western parameter and prism