The Lenovo Yoga 920 is an unexpected gem from Lenovo, a gorgeous device that I’d be happy to carry around with me everywhere I go. Quick! What’s the first Ultrabook that comes to mind? If you have even a vague interest in computers, your first choices will include the Dell XPS 13, Apple MacBook and just maybe, the HP Spectre 13. But did you know that Lenovo makes an Ultrabook that’s just as good as, if not better than, most Ultrabooks in the market?

A good Ultrabook is like a flagship smartphone. It’s meant to be sleek, sexy and stunning. It’s a device that you’d want to carry with you everywhere, a device you’d be happy to flaunt as well as work on every single day.

The Vibes is the perfect example of such a device. 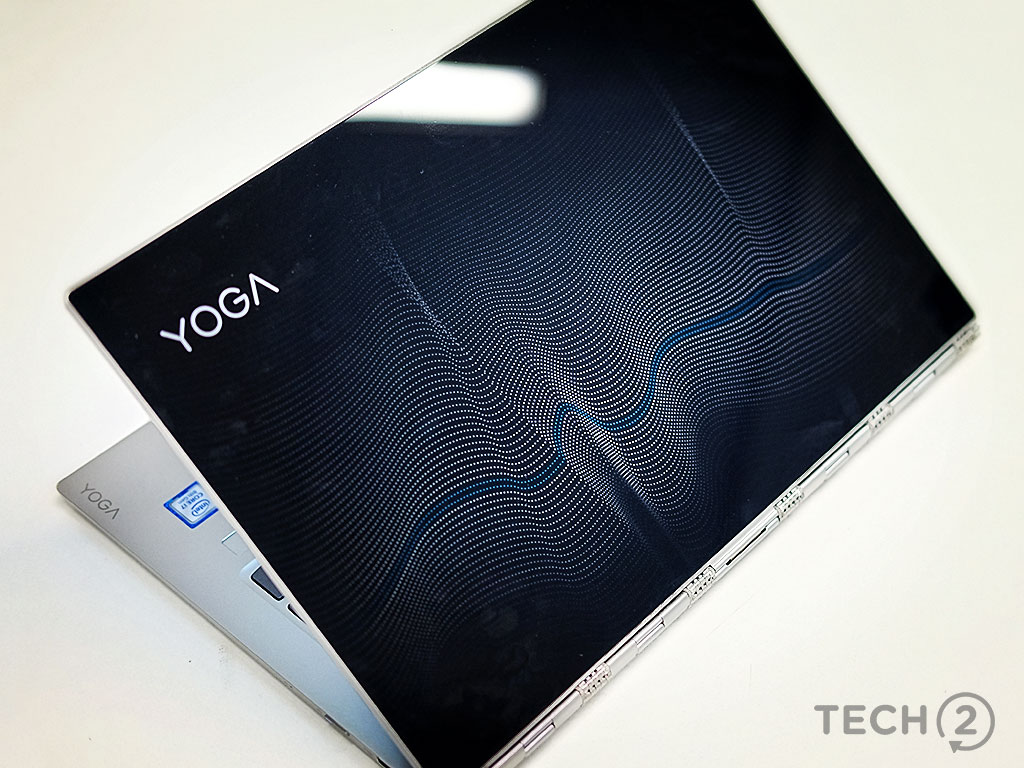 That gorgeous glass cover has been designed by an Italian design studio. Image: tech2/Anirudh Regidi

It is sleek, sexy and stunning and it is one that you’d want to flaunt. It’s also as incredibly light as it is powerful, and beautifully designed. Being a Yoga, it’s a convertible device, featuring a 360-degree hinge.

The laptop is an almost perfect rectangle of glass and metal. The watchband hinge and the custom glass cover add some additional flair. Do note that the regular Yoga 920 will not come with a custom glass cover.

That glass cover is what separates the 920 Vibes edition from other Yogas. It’s designed by an Italian design studio whose name we Indians would only butcher (Istituto Europeo di Design) and is meant to represent the idea of “Vibes of Elegance.” Whatever the story, it’s a lovely lid, and is one that will turn heads. I really like how symmetrical the design of the 920 is. Where most laptops tend to taper towards the front, the 920 is uniformly thick. Either way, the overall thickness of the device is very low, but Lenovo has still managed to accommodate a regular USB-A port and two USB-C ports (rated for Thunderbolt 3).

To be perfectly honest, I’ve never personally been a fan of the Yoga series’ watchband hinge, but I can appreciate the engineering behind the design, and people do like it.

Bezels are small, of course, so the 14-inch Yoga has the same footprint as a 13-inch device. The keyboard is great to type on. Image: Tech2/Anirudh Regidi

The touchscreen was also very responsive and supports stylus input.

In fact, Lenovo bundles a stylus with the device. This stylus is, I think, the one real flaw in the Yoga 920 though. The stylus itself is great. It’s got 4,096 levels of sensitivity and is a pleasure to use on the Yoga’s gorgeous screen, but that’s not the problem. What I didn’t like is the mounting mechanism for the stylus.

On an X1 Yoga, the stylus is nestled within the laptop, drawing power from the laptop for charging itself. On a Surface Pro 5, the stylus is magnetically clamped to the body. On other devices, the laptop body might feature a hook or loop or some other such accessory. On the Yoga 920, you get what looks like a 3D-printed plastic mount that you plug into the lone USB-A port, which you then squeeze the stylus into.

It’s a clumsy design that is at odds with something as elegant as the 920.

It’s an expensive Ultrabook. You expect the best, and that’s exactly what you get. The port selection is limited, but it's more than enough for everyone. Image: tech2/Anirudh Regidi

For connectivity, you get a very sensible port combination that includes a regular USB 3.0 port alongside two USB-C ports that support Thunderbolt 3, USB PowerDelivery and DisplayPort. Wi-Fi AC and Bluetooth 4.1 is supported.

The speakers are made by JBL and there’s a fingerprint reader that supports Windows Hello.

With a 13.9-inch UHD IPS panel that has almost no bezels, the Yoga 920 is almost perfectly portable. The bezel-less 14-inch screen hits that sweet spot between real estate and portability that makes the devices a joy to use. I find 13-inch screens to be too small and 15.6-inch devices to be too big to be easily portable. The Yoga 920 boasts of a gorgeous touchscreen. Image: tech2/Anirudh Regidi

Being a UHD screen, images on the display look sharp and very clear. The display is also very bright and colours seem accurate. Movies, especially 4K ones, look amazing.

Given that the Yoga is running an 8th gen Intel chip, it’s blazing fast in every benchmark. In fact, the Yoga 920 recorded the fastest video conversion time of on an Ultrabook to date, which speaks volumes about the performance of the device.

I would like to point out, however, that the 920 has a tendency for getting very warm under load, even uncomfortably warm at times. I suppose that this is a by-product of the thinness of the design, and all that metal.

Given that the 920 packs in a PCIe-based SSD, read/write speeds were spectacular, crossing the 3 TB/s mark at times.

Audio from the included JBL speakers was great. It was loud and clear and good enough for a slightly noisy room.

Going purely by the numbers, the Dell XPS 13 (2018) takes a significant lead, and a lot of this has to do with the smart engineering that Dell has put into the device. In real world use, however, the difference is insignificant.

On a regular work day, the device managed to clock in about 5-6 hrs of use before running out of charge. My usage is a bit heavy, inolving several dozen Chrome tabs, some mild photoshop work and plenty of Word, not to mention several email accounts and messaging apps on sync.

On lighter days, like weekends, I found that the battery could easily last about 8-9 hours of use when binging on Netflix and doing some light work.

The Lenovo Yoga 920 is an unexpected gem from Lenovo, a gorgeous device that I’d be happy to carry around with me everywhere I go. It’s a device I didn’t know I wanted.

What I like most about the device is its form factor. The 14-inch screen hits that sweet spot between usability and portability. I don’t have to squint at the screen and the non-existent bezels mean that I can fling it into some of the smallest of bags.

The device does tend to get hot under load, but if you're in the market for an Ultrabook, I can recommend none better.

If you do want a smaller device, the 12-inch MacBook and Dell XPS 13 (2018) are great options. If you want something larger, you might want to consider the larger Lenovo ThinkPad X1 Carbon (2018).

This Lenovo Yoga 920 Vibes laptop comes with Intel Core i7-8550U processor with 16GB RAM and a 512GB SSD drive. It has a 13.9 inch UHD IPS Multi-Touch screen panel with a resolution of 3840 x 2160 pixels. The laptop has interfaces like USB ports, bluetooth. It comes with Windows 10 Home OS.