Laying all speculation to rest, however, Xiaomi, on its Weibo page, revealed what appears to be the AnTuTu score for the upcoming device

Xiaomi’s Mi Mix 2s flagship is arguably as hotly anticipated as Samsung’s own Galaxy S9 devices. All we’ve heard about the device so far, however, are rumours. 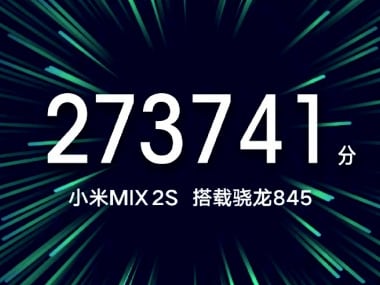 Laying all speculation to rest, however, Xiaomi, on its Weibo page, revealed what appears to be the AnTuTu score for the upcoming device and confirmed that it will indeed be powered by Qualcomm’s Flagship SoC for 2018, the Snapdragon 845. AnTuTu is a mobile device benchmark for measuring the relative performance of a device.

The post also confirms that the device will see a 27 March release date.

Going by the trend set by Apple, the Mi Mix 2S is also expected to incorporate a notch on the display. Unlike Apple, however, this notch will likely appear on the top-right of the display, making it possibly less of an intrusion.

As GSMArena notes, Xiaomi has stayed away from Mobile World Congress (MWC 2018) again this year and will have its own event for its flagships, most likely in China.