Xiaomi confirms the launch of new 'Mi Notebook' on 11 June: Here's how to watch it live

Xiaomi laptop might feature a 13-inch bezel-less display and is likely to be powered by the Intel Core i7 processor.

Xiaomi has sent out invites for a 'Mi Notebook' launch event in India. The event is scheduled to take place online on 11 June at 12 pm. The livestream will be available on Xiaomi's social media channels. A report by 91 Mobiles suggests that the laptop will be a rebranded RedmiBook 13, which debuted in China last year.

The report is attributed to tipster Ishan Agarwal, who reportedly confirmed the launch date and says that the RedmiBook 13 will be Xiaomi's first laptop in India. The tipster reportedly also suggested that the purported laptop will feature a 13-inch bezel-less display and will be powered by Intel Core i7 processor.

Parallelly, on 11 June, Xiaomi is also said to be hosting an event in China to launch the Redmi Band 5. 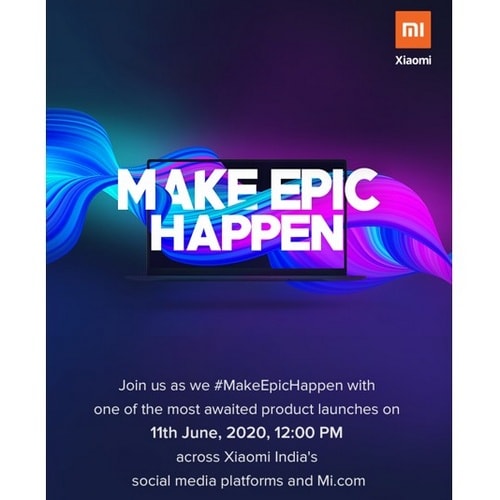 If the laptop is, in fact, a rebranded RedmiBook 13, then the specifications of the laptop (launched in China last year) should give us an idea on what to expect.

The RedmiBook 13, in China, was launched with a 13.3-inch full-HD anti-glare display with an 89 percent screen-to-body ratio. It came with Nvidia GeForce MX250 graphics and 8 GB DDR4 RAM.

Powering the laptop is the 10th generation of Intel Core processor. The RedmiBook 13 sports a metal body and DTS surround sound audio support.

In terms of battery, per Xiaomi, the laptop can last up to 11 hours in a single charge.

Redmi 9A, RedmiBook to launch in India today at 12 pm: How to watch the event live

Xiaomi may introduce notebooks in 2016; plans to take on Apple's Macbooks