Google Tez is out on Android and iOS: Here's all you need to know about the latest mobile payments app

Google has officially released its mobile payments app for the Indian market — Google Tez. The name of the app, translating to fast, is available on the Play Store as well as the Apple App Store. This is Google's first big foray into mobile payments in India. Tez will work with all banks that support Unified Payments Interface (UPI), which is backed by the National Payments Corporation of India (NPCI). There is a separate Tez for Business app as well, which is meant for businesses to receive payments from their customers. The Google Tez app will let you send to and receive money from friends, link up your bank accounts to your phone to pay for goods online as well as in physical stores and more. According to app description on the Google Play Store page you can, "Send money to friends, instantly receive payments directly to your bank account and pay the nearby café with Tez, Google's new digital payment app for India. Using NPCI's (National Payments Corporation of India) Unified Payments Interface (UPI), money transfers are simple and secure with Tez."

One of the interesting feature is called Tez Cash, which lets you make or receive payments from anyone nearby without sharing your personal details such as phone number or bank accounts. You can also pay and set reminders for paying recurring bills such as DTH or phone bills and so on.

Tez is not a mobile wallet in the same vein as a Paytm however. There is no option to store money in a wallet as such on the Tez app. Your wallet is in essence your UPI connected bank account. Tez supports most of the banks such as ICICI, Axis, State Bank of India, HDFC, among others.

According to Techcrunch, there is a limit of Rs 1,00,000 on the transaction amount in one day and you can do up to 20 transactions in a day. Google has also trademarked the name for countries such as Indonesia and the Philippines.

For business users having a current account associated with Tez business app, the limit is Rs 50,000 per month with UPI and no fees. After this limit, the bank will charge its respective fees.

You can also pay someone who does not have a Tez app, but has a valid UPI address. You will need to add the person's UPI address to your address book before making the payment.

We downloaded the app and gave it a spin. And it seems to be a user-friendly one for sure. Here are the steps you will need to go through to get the Tez app up and running on your Android or Apple smartphones.

Registration: First of all, you will have to select your language of choice from the eight languages including seven regional ones. You then choose your Google account that will be locked to the app — preferably the account which you have with your banks, but that is not a necessity. Then you add in the phone number which is associated with your banks. This is important as you cannot add a phone number which your bank does not have. Security: You can secure the Tez app with a pattern lock, pin lock or a finger print. 'Tez Sheild' is a Google powered multi-layered security feature which ensures data security on the app.

Cash Mode: Once this is done, you enter the simple user interface of the Tez app. The major portion of the app is occupied by the 'Tap for Cash Mode' button which has a Tez logo. On tapping it, you will see two options Pay and Receive, and you can select either one depending on whether you are making a payment or receiving it. It will search for devices nearby and show up the details of the person. Once you verify that it is indeed the person you want to pay (or receive money from), you will be prompted with a screen to enter the payment amount (or get a notification once you receive a payment), followed by the UPI pin entry. After that the payment is made instantly.

I did face issues transferring money to my colleague on his iPhone, but vice versa worked fine. When I tried sending money to a friend from my contact list, who does not have the Tez app, the app prompted me saying "This person hasn't added a bank account. We've sent a reminder".

Payments mode: When you tap on the Ruppee symbol present in the bottom half of the device, it will show you a list of contacts who have Tez installed on their phones. 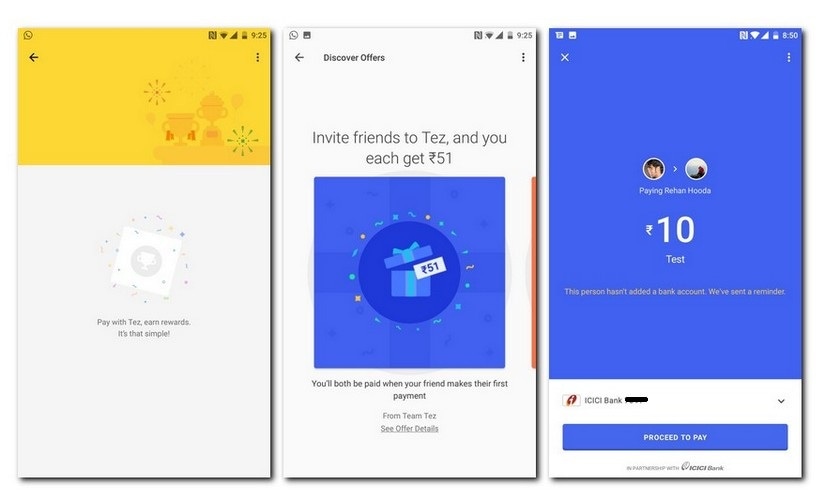 Rewards: Apart from this Offer tab, there is another tab called Rewards, which will pay you for making payment transactions using Tez.

It is still early days on the app and a lot of my friends are yet to get on the app. I will update this story as and when more people come onboard and I get to try the app out for different use cases. So far I do not see any dedicated businesses which are eligible for recurring payments such as my phone service provider or electricity bill provider in the Tez app. Google has partnered with services such as RedBus, PVR Cinemas, Domino's Pizza, DishTV and Jet Airways as launch partners and the Tez payment mode will be active in these apps.

Also there wasn't any interface to add in Debit or Credit card details, in case you want to pay via those means.

But so far it seems to be like a quick way of making and receiving payments, keeping in line with the UPI philosophy. Knowing Google, expect mass promotions of this app in the coming days.

You can download the Google Tez app on the Play Store and the App Store.