The feature will be somewhat similar to Huawei's GPU Turbo software launched back in June 2018.

With mobile gaming becoming increasingly popular, smartphone companies are trying hard to push hardware and software capabilities of phones to match user needs. We saw Huawei launch its own GPU acceleration technology in June last year called GPU Turbo. Well, the latest reports suggest that Samsung might be working on something similar.

Samsung filed a trademark in the EU (spotted first by GalaxyClub) for a software product called "Neuro Game Booster", which is in itself quite self-explanatory. While no further details have been revealed with it in terms of how it works, we can make an educated guess and conclude that the impact will be similar to Huawei’s GPU Turbo mode with its flagship HiSilicon Kirin SoC-powered smartphones. The only clue about the technology lies in the description field for the ‘List of goods and services’ that the trademark has been filed under. 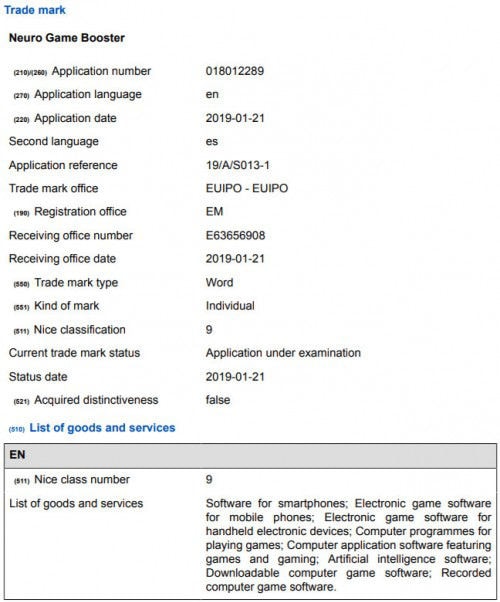 While the rest is mostly run of the mill stuff in terms of describing the category of technology, the mention of "artificial intelligence software" in the description affirms that a neural processing engine will be at work here.

Additionally, the "Downloadable computer game software" description indicates that Samsung might bring the technology to older smartphones as well, through updates or as a separate download package. There is no word on which smartphones will support the new feature but the word should be out on that soon.

As far as hardware goes, Samsung's Exynos 9820 SoC which was announced in November 2018, does come with a Mali-G76 MP12 GPU and an integrated Neural Processing Unit (NPU), suggesting that's there's no hardware limitation for the new feature. But the question of how different is it from GPU Turbo can only be seen once the feature is outed.