As Samsung’s flagship series — Galaxy S10 — nears its official debut, leaks about the phone are spreading on the internet like wildfire. While previous leaks shared a glimpse of the Galaxy S10’s front-fascia, new renders now give a good look of the back panel as well. The leak comes from 91Mobiles, which claims these renders to be official press images. The leaked renders are in line with the previous CAD renders and images that showed a capsule-shaped dual-lens hole punch camera at the top left corner of the display. The report pointed out that one of the lens could be a wide-angle selfie camera. At the back, the renders show triple camera setup aligned horizontally at the centre with a flash module and heart rate monitor alongside.

Besides the triple camera arrangement, the renders shed another interesting factor of the Galaxy S10. While the previous iteration, Galaxy S9 series, had a rear-mounted fingerprint sensor, the newly leaked renders show the purported Galaxy S10 lineup having a plain back panel. That indicates that the S10 might feature an in-display fingerprint sensor. If the render is to be believed, then Galaxy S10 will be the first from the company to offer this feature. Previous reports noted that Samsung might entirely drop the iris scanner in favour of an ultrasonic in-display fingerprint sensor. 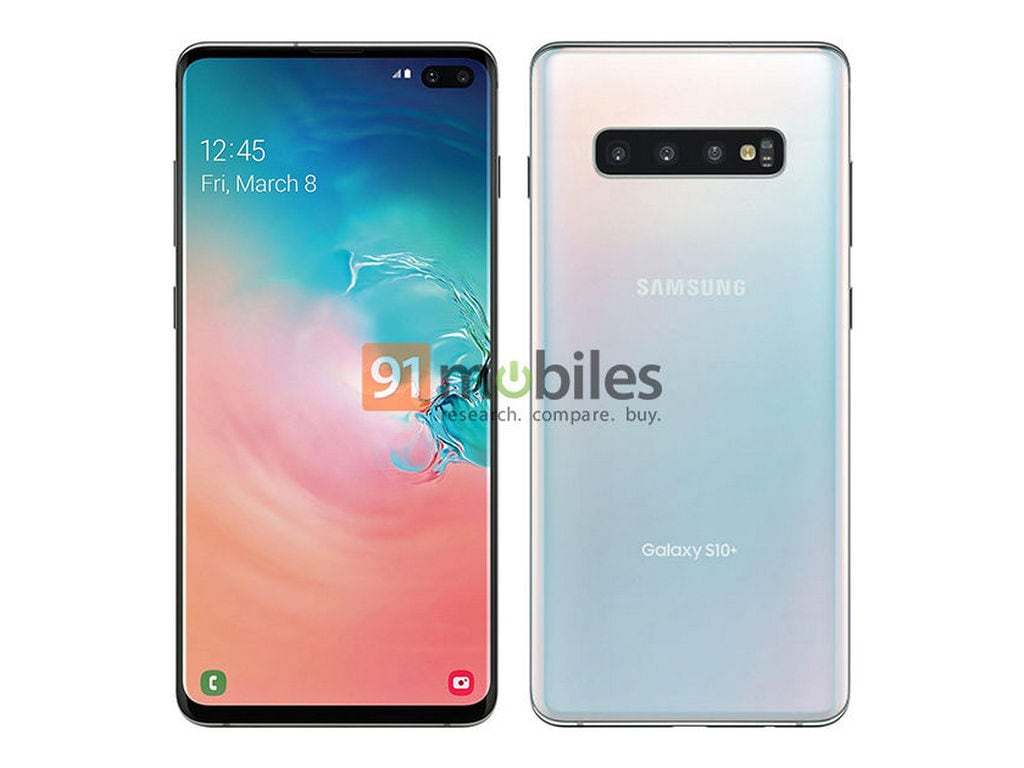 Notably, the Galaxy S9 series was the world’s first to offer variable aperture lens. The render gives a fine outline of Samsung’s ‘Infinity O’ display and interestingly the calendar date on the phone shows 8 March.

As Samsung is gearing for its next Galaxy Unpacked event this month, GSMArena suggests that the Galaxy S10 series might be released on 8 March following its debut on 20 February. The company’s upcoming major event will take place in San Francisco.

Coming back to the renders, the alleged Galaxy S10 images reveal that the devices will have bezel-less fun-fare. The volume keys and the Bixby button could be seen on the left side while the power button is drilled on the right side. The 91Mobiles report also said that the new colour option on the render will be named ‘Prism White.’

Another, AndroidPolice report notes that the tech giant might also release a Blue variant of its new flagship series after the initial release. The phones are expected to have glass casing and metal frame surrounding the perimeters.

As for the specs, the Galaxy S10 Plus is rumoured to sport a tall 6.4-inch QHD+ display, while the smaller variant Galaxy S10 is said to have a 5.8-inch screen. The new Galaxy S series is expected to carry the latest high-end chipset from Qualcomm, Snapdragon 855 or the proprietary Exynos 9820 processor depending on the region. The Galaxy S10 series is expected to include 6 GB RAM and a humongous 1 TB storage onboard.