From OnePlus’ flagship, the OnePlus 6T, Oppo R17 Pro, Vivo Nex to Xiaomi Mi 8 Explorer Edition, we witnessed a bunch of smartphones with under-display fingerprint sensor last year. Meizu, continuing the trend this year, introduced the Meizu Zero. Looks like it's now the turn of Xiaomi’s sub-brand, Redmi, to bring out a device with this feature. The device in question is reported to be Redmi X that appeared online early this month. Interestingly, previous reports presumed Redmi Note 7 as the Redmi X. However, the latest report now suggests that it will be a different device altogether. A leaked poster of the supposed Redmi X is hovering on the Chinese microblogging site, Weibo. The poster first spotted by Playfuldroid indicates that the upcoming Redmi X could be the first from Redmi’ smartphone inventory to offer an in-display fingerprint sensor.

The teaser poster also reveals the Redmi X launch date to be listed as 15 February. As per the report, the translated text on the poster reads, “screen fingerprint scanner mobile phone.” 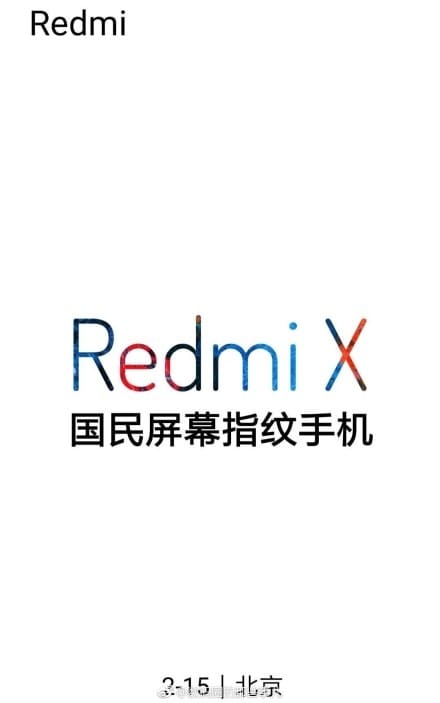 As for the conventional specifications, the purported Redmi X is expected to be more powerful than the Redmi Note 7 that was launched this month. The phone is rumoured to feature a dew-drop notch display and will be housing the Qualcomm Snapdragon 710 SoC instead of the Snapdragon 660 found the on the Redmi Note 7.

Redmi Note 7 Pro is said to feature a 48 MP Sony IMX586 sensor. Reports speculate that the phone might carry specs similar to the Redmi Note 7. The phone is set to debut post the Chinese New Year.

Notably, the Redmi Note 5 Pro was officially released in China on 14 February last year with the device later arriving in the Indian market on 22 February.