Oppo Reno Ace confirmed to launch in China on 10 October, to have 65 W charging

Reno Ace would feature a 90 Hz refresh rate screen, similar to the one seen on the OnePlus 7 Pro.

Oppo had announced at an event for the Reno 2's launch in China on 10 September that its next phone flagship device will be called the Oppo Reno Ace. Now it seems that we have an official launch date of the device in China. 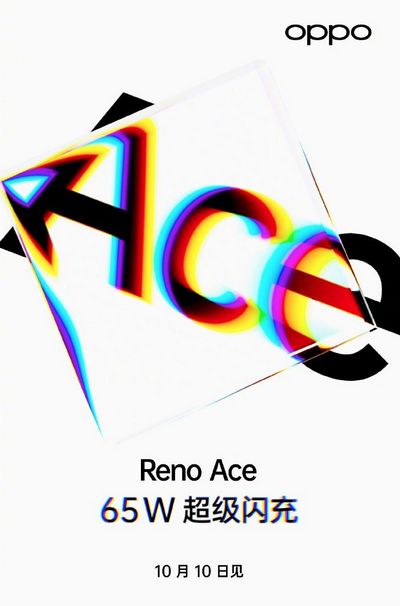 As per a Weibo post by the company, the Oppo Reno Ace will be announced in China on 10 October. The poster shared by Oppo shows that the phone will be coming with a jaw-dropping 65 W fast charging capabilities. The company had earlier confirmed as well that the Reno Ace would feature a 90 Hz refresh rate screen, similar to the one seen on the OnePlus 7 Pro.

Since the company recently teased an unknown smartphone with a waterfall display, it is possible that Reno Ace might be Oppo's first smartphone to feature that. As for the processor, it is being speculated that the smartphone might be powered by Snapdragon 855 Plus processor.

An upcoming 5G phone from Oppo with model number PCKM70 was also spotted on TENAA earlier this month fuelling speculation that the Reno Ace could support 5G as well. It could also be possible that the Reno Ace might a variant which would be the Reno 2 having the Snapdragon 855 Plus chipset. More details of the device should be revealed soon.

Oppo Reno to launch in China on 10 April: All we know so far

The New OPPO Reno 10x Zoom Has It All - Aesthetics, Performance and Camera