At IFA 2019, Motorola announced its new E-series smartphone — Moto E6 Plus — which comes with options for 2 GB and 4 GB RAM, a MediaTek Helio P22 processor, 3,000 mAh battery, and a dual-camera setup at the back. Today, Motorola has launched the same smartphone in India, but with a slightly different name — Moto E6s.

The Moto E6s comes with a sole option of 4 GB RAM and 64 GB storage. Besides that, the specifications are pretty much the same as the Moto E6 Plus. I spent a while with the device and from my brief experience, I am not exactly excited about the device. Here's why:

Love the good ol' removable battery, but all that shiny chrome... *shudder*

The first thing I noticed when I took the Moto E6s out of the box was that it was super light, I mean not "oh hey the phone's so light", but unusually light, something's wrong light. But the lightness made sense when I found a battery in the retail box. It's certainly been a while since I've seen this, and I was actually happy to see it.

Also, it was only when I saw the battery that I realised the phone's back actually comes off. The Moto E6s is well-designed. The back sits flush with the frame and it gives you an impression of a unibody design. 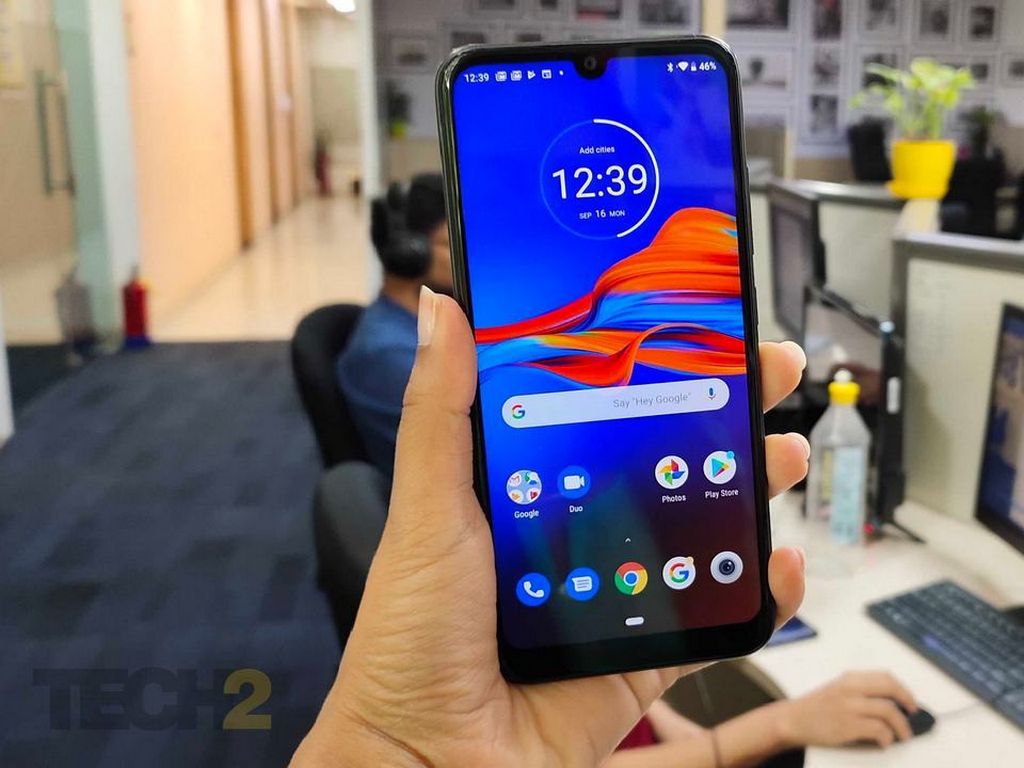 Having said that, the colour variant I have is the flashy, chrome-y, silver variant. Not only do I really dislike the mirror effect at the back of this phone, but I was also really bothered by how quickly the back gets fingerprint smudges. Within two minutes of taking the phone out of the box, I had put on the transparent case that comes bundled with it. Also, even after adding the battery to the phone, the Moto E6s is still pretty light.

I used the Moto E6s briefly and already found the phone taking its own sweet time in certain apps and tasks. During my initial usage, I noticed a lag in the camera app. Even tapping a photo after saving it feels slow.

The fingerprint sensor is also not the quickest. After you tap the sensor at the back, the screen lights up after a blank half-second or so.

Besides that, I did not feel any lag in the phone per se. Apps launches had a slight delay but it didn't bother me much. I also played Need for Speed: No Limits on the phone and the game ran pretty smoothly. I did not notice any frame drops either. Moto E6s gets an edge due to Android One UI

The Moto E6s also comes with the Android Pie-based One UI, which is a plus point for the device, considering there aren't a lot of phones in the sub-Rs 10,000 segment to offer that. The biggest opponent of the Moto E6s in the segment are Redmi 7A and Galaxy M10. Both smartphones use their own customised UI on top of Android Pie, which mostly comes with some, if not a lot, of bloatware. Stock Android is always easier to navigate through.

The display is beautiful

Moto E6s has a 6.1-inch HD+ Max Vision IPS display, and it's a delight watching a video or playing games on the device. It is bright and has great contrast, and text sharpness is also good. The display actually lends premium-ness to the device. Although, I would have loved to see the phone without the thick chin at the bottom.

I also spent a while with the Moto E6s' camera. I took a bunch of macro, daylight and portrait shots from the phone. Check this Twitter thread below to see a few sample images.

.@motorolaindia has launched the #motoE6s in India. The smartphone features a 13 MP + 2MP rear cam setup and an 8 MP selfie camera. Here are some sample images from the selfie cam (sans the beauty mode): pic.twitter.com/cnhI2Slt9n

The camera performance of the Moto E6s seemed decent, however, the slow shutter speed really tested my patience.

This isn't a knock against the Moto E6s, but with a Redmi Note 7s and its 48 MP camera available for just Rs 9,999, I do wonder if anyone will bother going for any other smartphone.

On paper, Motorola is offering a great phone for the price. No other phone comes in a 4 GB RAM and 64 GB storage variant at Rs 7,999 right now, and it's nice having stock Android too. The pricing is certainly impressive, but bear in mind that this could also just be an introductory offer and that pricing will hit Rs 9,999 — Redmi Note 7s territory — after this period.

Nevertheless, it will be interesting to see how Moto E6s will perform against its competitors like the Redmi 7A, Galaxy M20 and Realme 3, all of which are priced around Rs 7,999.