The Indian scientists were part of the team of 1,200 scientists from 100 institutions worldwide.

At least 40 scientists from 13 Indian institutions, including IIT-Bombay played an important role in the exciting 17 August observation of gravitational waves from a pair of colliding neutron stars, detected for the first by Laser Interferometer Gravitational-Wave Observatory (LIGO) and Europe's Virgo, officials said in Mumbai. The Indian scientists were part of the team of 1,200 scientists from 100 institutions worldwide, plus 280 physicists and engineers from 20 research groups of Europe, which contributed, among other things, to LIGO-Virgo discovery paper, said Indian Institute of Technology, Bombay (IIT-B) in a statement late on Monday night. 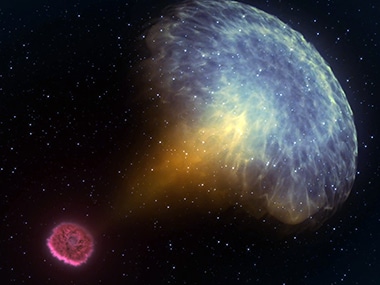 The Indian scientists contributed to the fundamental algorithms which are crucial to search for inpiralling binaries in noisy date from multiple detectors, in computing waveforms for these signals by solving Einstein's equations, separating astrophysical signals from numerous instruments and environmental artefacts, interpreting the joint gravitational-wave and Gamma-ray observations, tests of Einstein's theory and many other aspets of the data analysis.

From IIT-B, two faculty members of the Department of Physics - Archana Pai and V Gayathri -- are members of the LIGO Scientific Collaboration with complementary expertise. Archana Pai has expertise on gravitational wave multi-detector algorithms and probing astrophysical parameters in the joint detection scenario. The group interpreted joint-gravitational wave and gamma-ray observations along with K. G. Arun, (CMI, Chennai) and a PhD student M. Saleem (IISER Trivandrum) within the collaboration.A

Varun Bhalerao, whose expertise is in the search and study of counterparts to gravitational wave sources, was involved in the EM follow-up efforts: the X-ray searches with AstroSat, along with student Arvind B, a search for optical sources with the Himalayan Chandra Telescope and a radio search with GMRT. The LIGO has Indian scientists drawn from CMI Chennai, ICTS-TIFR Bangalore, IISER-Kolkata, IISER-Trivandrum, IIT-B, IIT-Gandhinagar, IIT- Hyderabad, IIT-Madras, IPR-Gandhinagar, IUCAA-Pune, RRCAT-Indore, TIFR-Mumbai and UAIR-Gandhinagar.

Besides, astronomers from IISER-Pune, IIT-B, IUCAA-Pune, TIFR-Mumbai, PRL-Ahmedabad, IIT-Hyderabad, IIA-Bangalore, NCRA-TIFR Pune, ARIES-Nainital and IIST-Trivandrum also took part in the electromagnetic follow-up of this event using a variety of telescopes. Several Indian telescopes like the AstroSat, Giant Metrewave Radio Telescope and Himalayan Chandra Telescope scanned the skies for electromagnetic flashes and the sensitive CZTI instruments on AstroSat helped narrow down the location of the gamma-ray flashes.

Similarly, HCT obtained optical images at locations of neutrinos detected by other telescopes at the same time as the burst and showed that they were unrelated to the gravitational-wave trigger, while GMRT played a crucial role in understanding jet physics and refining models of radio emissions from the remnant formed by the merging neutron stars. The development is significant considering it happens to be the strongest gravitational-wave signal detected so far, owing to its relatively close location of about 130 million light-years from Earth.

It was also confirmed by a large number of telescopes around the world which studied various forms of radiation from the merger. "This is a new milestone in the success saga of advanced gravitational wave detectors, which have announced the discoveries of four black hole mergers to date. The first such detection in 2015 led to the awarding of the Nobel Prize in Physics this year," said the IIT-B statement.

Neutron stars are the smallest, densest stars known to exist and are formed when massive stars explode in supernovas. Typical neutron stars are heavier than the sun, but have a diameter of just about 20 kilometers: objects so dense that a teaspoon of neutron star material weighs more than Mount Everest.