The new underwater camera uses energy from soundwaves made by ships, submarines and swimming fish to power itself. It also uses soundwaves to transmit the photos it takes.

A team of engineers and scientists at the Massachusetts Institute of Technology, in Cambridge, Massachusetts have developed a radical new camera system that works without batteries, transmits data wirelessly, and functions underwater, using underwater sound waves. 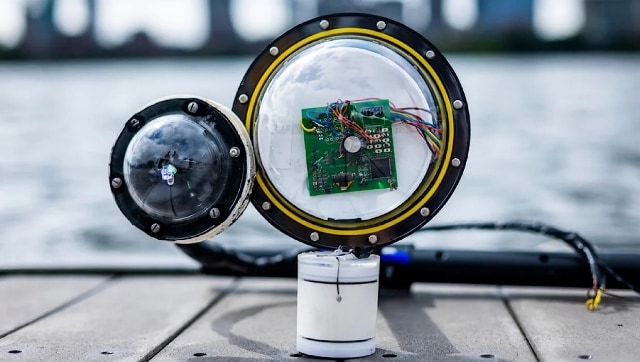 Scientists all over the world believe that over 95 per cent of the seas on Earth have never been observed. As a result, we know more about space and other planets, than we do about our oceans on Earth. Sending a camera down to the depths of our ocean wasn’t really an option, mainly because doing something like that would need a hardwired connection between the Earth’s surface to a research vessel or mission vessel so that its batteries may be regularly recharged.

So, the engineers had to come up with a power delivery and storage system that could sustain itself, without relying on traditional sources such as solar or hydroelectricity. What they ended up with, is an underwater camera that is nearly 100,000 times more energy efficient than any existing underwater camera.

The camera uses specialized piezoelectric materials to transform mechanical energy from sound waves passing through water into electrical energy. Basically, they use the mechanical energy from sounds or waves created by swimming fish, ships or submarines passing nearby or even somewhere in the distance. The camera transmits data to a receiver outside the water, again using sound waves, which reconstructs the image. Sound waves travel much better in water than they do in air.

The camera is capable of taking colour images even in a dim underwater environment while wirelessly sending them via the water.

The camera can run continuously for many weeks without a power supply, which would enable scientists to observe and research unexplored regions under our oceans and look for new species, marine pollution, and the consequences of climate change.

The team of researchers were led by Associate Professor Fadel Antib of the Department of Electrical Engineering and Computer Science and a member of MIT’s Media Lab. The team is working to further enhance and increase the new camera’s memory. They are also working on a feature that would enable the new camera to capture video underwater.

The research and development of the camera was partially funded by the US Office of Naval Research, so in all likelihood, this is going to see military and naval applications. As a result, there is very little scope for the device or something similar to make its way to the open market anytime soon.