After years of boring us with its updates, Intel finally has something new and exciting.

For a company that builds and designs the chips in just about every computer in the world, chip-maker Intel has been doing a rather bad job of keeping the PC space fresh and exciting. That responsibility has been taken up, and gladly, by rival AMD, which has been doing a stonking job of showing Intel how it’s done.

AMD’s excellent Ryzen architecture is now nearing its third-generation design and so far, Intel’s knee-jerk responses has left a lot to be desired. If you’ve been out of the loop for a while, here is, in brief, a quick overview of the PC market.

The past: Tick Tock

Intel introduced its Core series of CPUs about a decade ago. AMD tried, and failed, to catch up to Intel several times in the intervening years, but Intel’s design was just too good and far too efficient for AMD to do anything about. For a time, it seemed that AMD had simply given up hopes of catching Intel. As the world found out later, AMD used that time to take a breather and start afresh. Intel finally has an exciting new CPU architecture to show off.

Intel, on the other hand, used the time to continue polishing its existing architecture – using a model that became popular as tick tock – and to rake in the profits. Starting with Intel’s first Core i-series CPUs, the next 6 generations of Intel CPUs simply offered a 10-15 percent year-on-year performance bump and minor updates to CPU features and overall power efficiency.

From 2011 to 2017, you could simply copy-paste Intel’s press releases for every new platform update.

About three years ago, AMD released Ryzen. A brand new CPU architecture that, overnight, changed the game. Ryzen was new and still lagged behind Intel in terms of sheer efficiency, but it made up for that with raw horsepower and more cores at a lower cost than any PC enthusiast thought was possible. One can think of cores as the fundamental compute unit in a CPU, the bit that does all the number-crunching that makes a CPU a CPU. As a rule of thumb, the more cores the merrier. 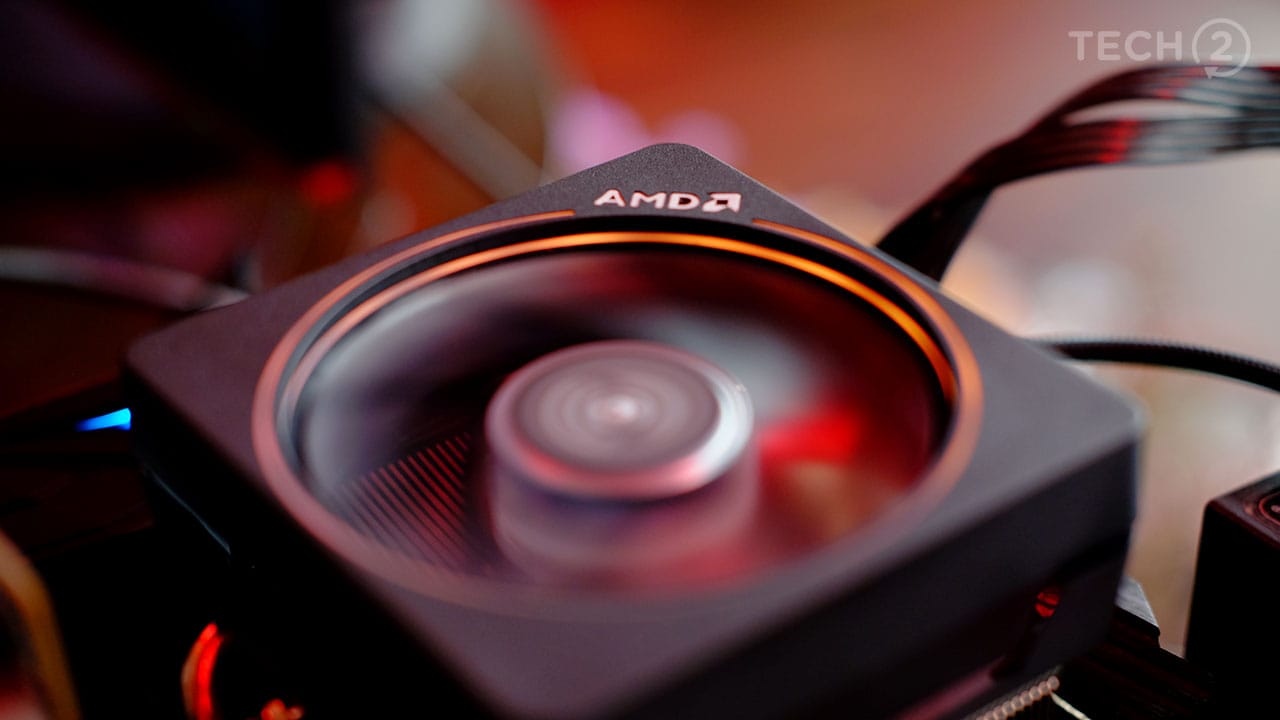 AMD has been stealing Intel's thunder these past few years. Image: tech2/Anirudh Regidi

While Intel’s consumer-level offerings (for people like you or me) started at 2 cores (i3) and went to 4 (i5 and i7), AMD started at 4 (Ryzen 3) and went to 16 (Ryzen 7) and even crossing 32 (Threadripper). Suffice it to say that Intel was in a bit of a panic. Following the launch of Ryzen and its subsequent popularity, Intel rushed to release its 8th generation (Kaby Lake-R and Coffee Lake in 2017), that suddenly offered a 40 percent performance bump. How did Intel do this? Essentially, they slapped on two additional cores to the previous year’s design. Oh, there were some tweaks to the CPU architecture, but these were relatively insignificant, and to all intents and purposes, we were still looking at the same design that Intel had released in 2015-16.

The present: AMD is more fun

Intel’s 9th gen CPUs, announced earlier this year, simply tweaked the same formula yet again, though it did depart from the norm by removing a feature called hyper-threading from all but its most expensive consumer-grade CPUs. The latter appears to have more to do with the now infamous Spectre and Meltdown related security flaws than anything else, however. 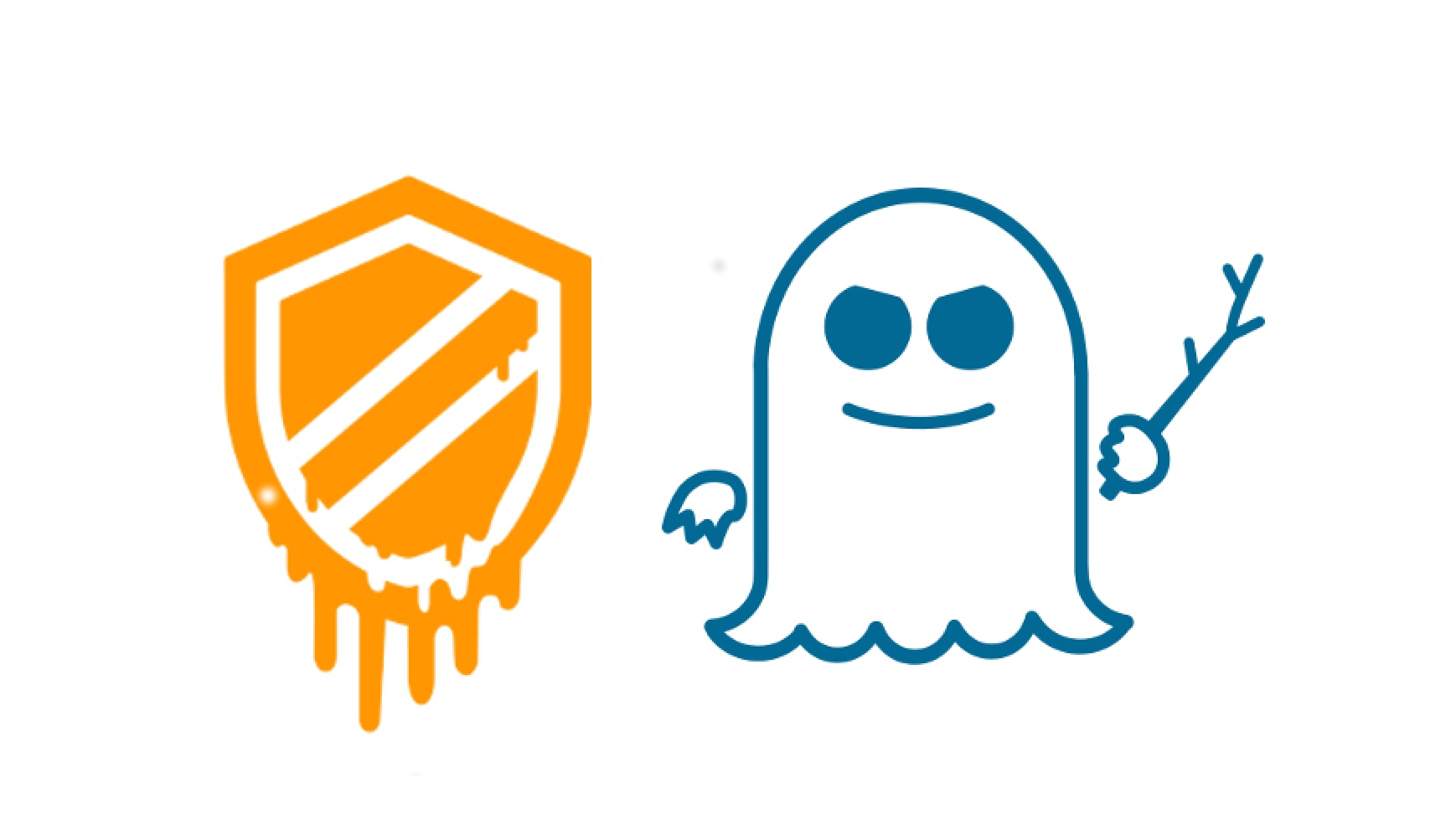 Spectre and Meltdown vulnerabilities have been a particular pain point for Intel.

AMD is still going strong and is on the verge of announcing its third-generation Ryzen platform. Popularity continues to grow and we’re seeing a larger percentage of enthusiasts opting for AMD chips.

The future: Foveros and Sunny Cove

After years of boring us with its updates, Intel finally has something new and exciting, but that something new comes in two parts. The first part, called Foveros, is a new model for building CPUs. Traditionally, chips like CPUs are essentially designed in 2D, computing happens in one plane. 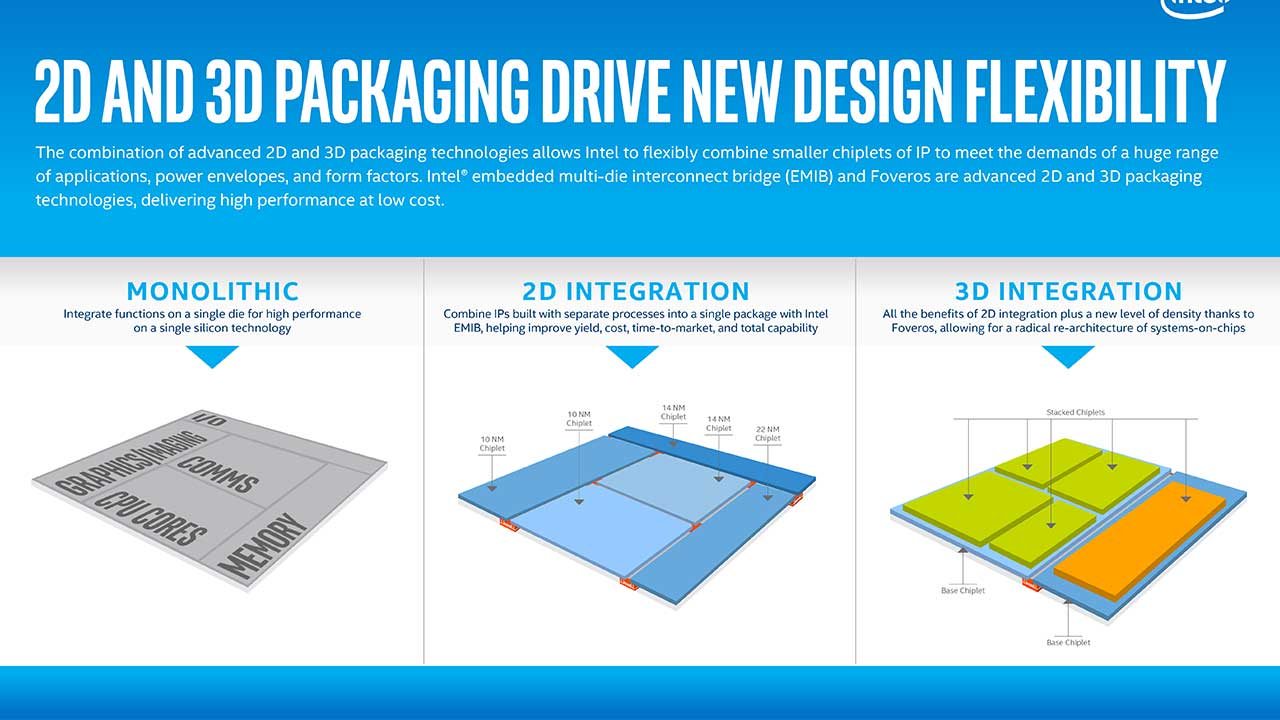 Intel's Foveros tech could be the future of chip design. Image: Intel

As chips get more complex, their surface area also has to increase to accommodate more and more transistors – the fundamental building block of a CPU. The larger the area, the greater the distance between parts and the greater the time consumed per calculation. Intel’s solution for this is called Foveros, a new architecture where chips can be stacked in 3 dimensions. Given that chips like CPUs can get extremely hot, stacking chips in 3D is not easy and presents significant engineering challenges. Intel seems to have met those challenges.

The second part of Intel’s update is Sunny Cove, a brand new CPU architecture for chips that will be built using Foveros tech and a brand new 10 nm process. The 10 nm here refers to the size of the smallest feature on the chip. The smaller the feature, the more efficient it is, performing more work while consuming less power.

What is Intel Sunny Cove?

Before we dive into what Sunny Cove is and why it’s better, we need to understand a few terms.

Instruction: An instruction is simply an operation that a processor must perform and could be something as simple as adding two numbers. A processor’s speed and efficiency are determined by the number of instructions it can handle per second or per clock cycle. 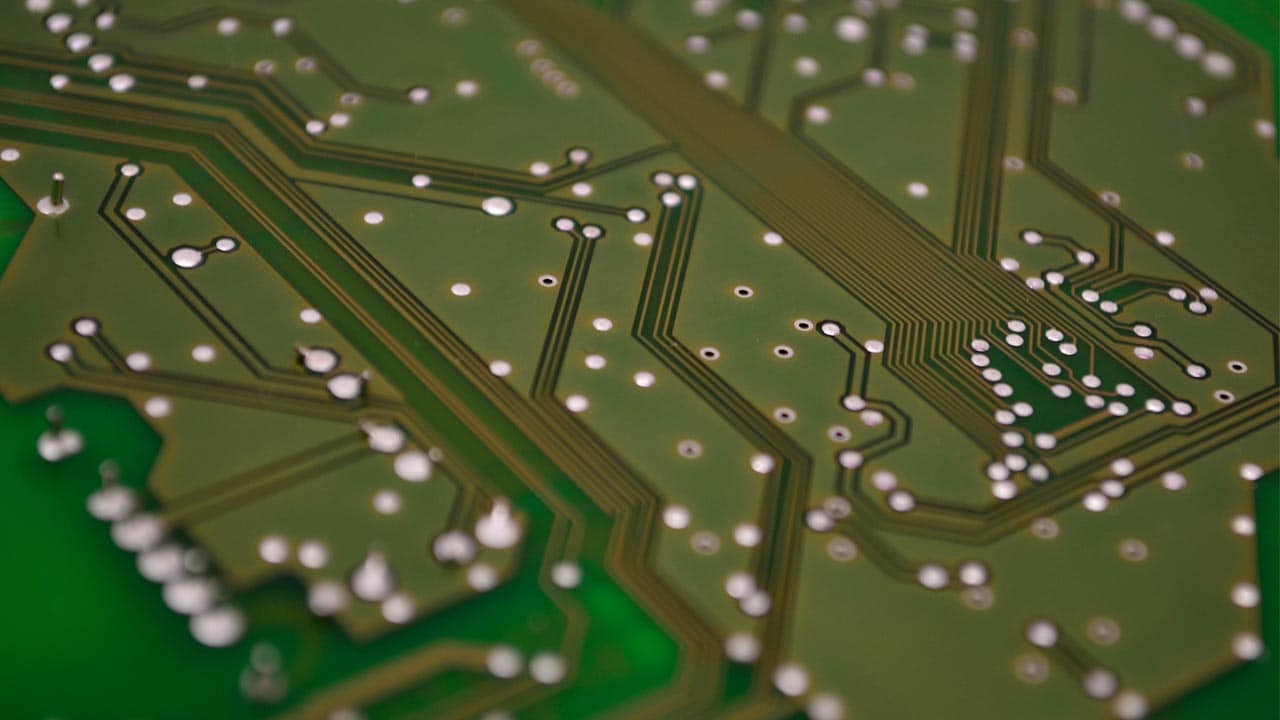 Clock rate: CPUs consist of billions of transistors. These transistors are grouped logically to handle certain kinds of instructions. At any given moment, a CPU could be juggling between thousands, if not hundreds of thousands of instructions. To keep a handle on this, all instructions are synchronised to a particular frequency called clock rate. All you need to know is that the higher the frequency, the faster the CPU and the more instructions it can execute per second. Each tick of the “clock” is a clock cycle.

Instructions per clock: This indicates the average number of instructions executed per clock cycle. The higher this number, the faster and more efficient the processor.

Intel explains that CPU performance can be improved by 5 distinct means. Let’s go over them step by step.

The first three means, categorised as ‘General Purpose Performance (GPP)’, improve the overall system performance regardless of what sort of code is being run. These are as follows:

Deep: Cores can be “deeper”, meaning that they can perform a larger number of operations simultaneously (parallelism).

The next set is categorised as ‘Special Purpose Performance (SPP)’ features. These can best be described as improvements that target very specific workloads. Your smartphone, for example, can play back videos all day without draining the battery much because its chipset is specially designed to more efficiently handle that particular kind of processing. These improvements can also happen via software, where developers get access to tools that allow them to perform certain tasks more efficiently on, say, Intel CPUs. Aspects like AI, cryptography, compression/decompression, etc. benefit from this.

With Sunny Cove, Intel has introduced a number of improvements that target all of the above. The details are quite technical in nature and involve things like cache sizes (L1, L2 and μop caches are now larger) and the efficiency of branch predictors and are well beyond the scope of this article and are likely to require a computer engineer to truly appreciate. Until reviews come out, which should be some time next year, we’ll just have to take Intel at its word and assume that these new CPUs will be much faster, efficient and more specialised than ever before. A bunch of new software tools and APIs have also been introduced so developers can take better advantage of Intel's designs.

Graphics and gaming: Improvements to architecture aside, one of the most exciting announcements was that the next generation of integrated graphics, debuting with Sunny Cove, will be “useful”, i.e., we can finally game on Intel integrated graphics. Intel integrated graphics are currently the very worst choice for gaming, but that's about to change.

Intel’s integrated graphics have, so far, been just powerful enough to run an operating system and play high-resolution video without stuttering or consuming too much battery.

Again, the actual changes in the new architecture (referred to as Gen11/GT2) are best left to engineers to decipher. Suffice it to say that according to Intel, gaming on integrated graphics will now be a very real possibility. In addition to this, the GPU now natively supports high-quality HEVC encoding and decoding (more efficient video playback) and support for playback resolutions of up to 8K. There’s also better support for HDR (high dynamic range) content, and more importantly, adaptive sync.

Displays like monitors and TVs, starting at the top, render images one line at a time. The data for each line is fed via the GPU, which does the calculations. Some lines can take longer to render because that portion of the scene was more complex. The sky in a game, for example, is much simpler to render than grass. The time delay is fine in a static scene like a photo, but in games and video, the delay can result in visual tearing, where lines from various frames are rendered out of sync.

Features like V-Sync, AMD’s FreeSync, NVIDIA’s G-Sync and Adaptive Sync aim to prevent tearing by synchronising all lines of a frame before displaying them, leading to a more consistent image. Adaptive Sync is simply one form of sync that has been adopted as an industry standard.

In 2020, Intel will debut its XE graphics solutions, which includes discrete graphics chips that will take on the likes of AMD and NVIDIA in that space.

Given that Intel poached AMD graphics chief Raja Koduri quite some time ago, this announcement was expected.