YouTube has a virtual monopoly in video-streaming space for creators, could IGTV shake things up?

Instagram has finally launched its much-awaited feature to take on the likes of YouTube, Snapchat and many other video streaming platforms for content creators. Instagram CEO Kevin Systrom announced the launch of the IGTV aka Instagram TV app on Android and iOS at an event in San Francisco last night.

IGTV will let content creators upload videos which can be up to an hour long on the app. IGTV comes as a standalone app, or you can get to it by tapping on the TV icon present just to the left of the Direct Messages logo in your native Instagram app. The interface of the IGTV app is video focussed, and all you see is 9:16 aspect ratio video which covers the entire display real estate. Verified content creators will get an option to add videos up to an hour long. Other regular creators can add videos which are up to 15 mins long. The current Instagram app only lets you add up to 1 min long videos in the regular feed and 15 sec clips on Instagram Stories. With IGTV, that duration has been significantly increased for everyone. Eventually, the hour-long format will be rolled out to all the users.

“It’s time for video to move forward, and evolve. IGTV is for watching long-from videos from your favourite creators,” announced Systrom on stage, the feed of which is available on IGTV.

Apart from the increase in duration, creators can also upload the videos for IGTV via the web browser.

How to use IGTV 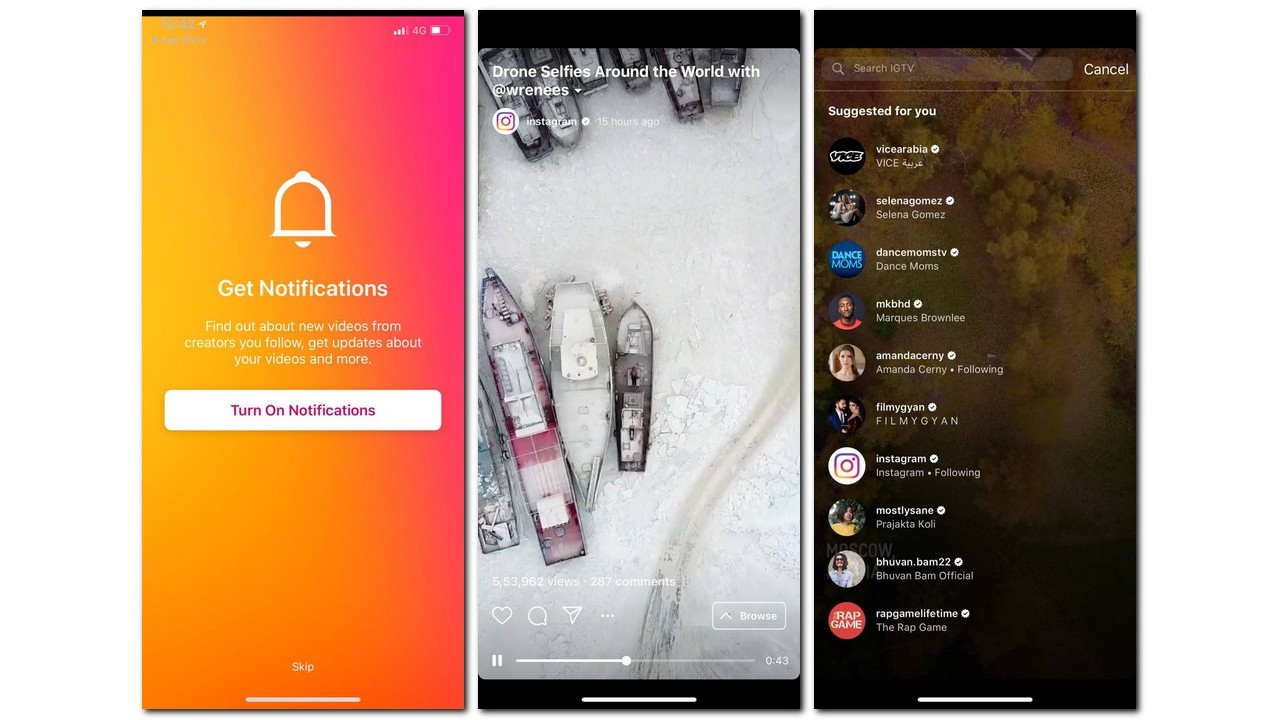 There are two ways to use IGTV — either download a dedicated app (preferable) or you can get to IGTV via the button inside your Instagram app. In the IGTV app, you are presented with a full-screen video which will be playing. You can like, comment or share this video just like you do any other Instagram post on the feed. On the bottom right-hand side is the Browse button. Tapping on the Browse button slides up a carousel where you are presented with four tabs, with video previews below them. The four tabs you can browse through.

'For You' tab will show you videos which are from verified accounts that you follow. The 'Following' tab will show you videos from all your followers, 'Popular' tab lists videos by influencers and celebrities who Instagram has tied with. 'Continue Watching' has a list of videos which you may have stopped mid-way, and you can continue watching them from the last stopped position.

It seems as though the Instagram team was waiting for the user base to the touch the magic figure of one billion users before announcing their new venture. A user base of one billion, after having around 800 million users back in September means that the IGTV app can build on two things — a ready user base where most of your social network is within the app ecosystem and secondly, a platform which will attract advertisers as there are guaranteed eyeballs for content that will be pushed out by creators and influencers.

Let that sink in.

When one looks at social media platforms, four of the top five social networks (with a billion plus users — Facebook, WhatsApp, Messenger, Instagram) are owned by Facebook. YouTube is the only other social network which has over a billion users. Considering Facebook’s video strategy is not really making it attractive to content creators, that leaves only YouTube as the reigning king of this social media video jungle. YouTube has been around since 2006, and is the go-to site if you are searching for videos. Over the years, YouTube has created a well-oiled platform for content creators. It is the default (video) search engine for a lot of people as well.

If one were to take the example of Snapchat, then Instagram certainly was responsible for the poor user growth on Snapchat. YouTube does not face any such existential crisis. Facebook Live, Watch, Videos, hasn’t really caused any dent in YouTube’s user base. YouTube is the one-stop shop for video, for most of the internet audience. Image: Reuters

But of late, there has been some disappointment among creators when it comes to revenue sharing models with YouTube and its strict monetisation algorithms. A lot of the YouTube influencers in India that I have spoken to, have told me that it is becoming increasingly difficult to just bank on YouTube earnings. This has caused a lot of them to partner with brands to create content, as that is the only sustainable model right now.

Instagram managed to successfully wean a lot of Snapchat influencers to its Instagram Stories platform. Instagram’s sheer user base immediately means that stories uploaded there will get a lot more views and engagement than that on Snapchat, even though it was Snapchat that really popularised the vertical video format. It has demonstrated in the last two years, that it can disrupt things. With IGTV, it is just presenting content creators with a promise of another platform where money can be made.

Vertical video format on a smartphone thus became the default. Come to think of it, it is the most logical and convenient way to consume content. You don’t have to bother rotating the smartphone to see content. In fact, according to this report, the time spent viewing videos on mobile has surpassed the time spent watching TV. Facebook started prioritising vertical video last year itself.

Looking at the popularity of apps like Snapchat and Instagram among youngsters, it is a clear indicator that the vertical video format is here to stay. In fact, Systrom mentions the habits of teens saying that they are watching 40 percent less TV than five years ago. "On Instagram, people are watching 60 percent more video than last year. So how we watch is changing quickly, but what we watch is changing too. An entirely new category of video now exists. Teens might be watching less TV, but they are watching more creators online," said Systrom.

Now that's not just true of the US market. Just watch this video to see which is the most popular app among Indian teens.

You will be surprised to find the kind of content being made for Instagram Stories by some content creators. Also, by continuing to go with a vertical video format, Instagram has ensured that it has created a differentiation for itself vis a vis YouTube, which still heavily leans towards horizontal videos.

This could also mean a headache for content creators who are creating for both the platforms. Eventually, there will come a time when one format will be chosen over the other, at least that will be the case for some creators. Which that one will be, I am not in a position to say right now. But if I were a content creator with massive following, unless majority of my audience is transitioning to either of the two platforms, I would like to keep creating content for both platforms.

Unlike YouTube, Instagram hasn’t announced a monetisation platform right off the bat, but it is inevitable that IGTV monetisation will be an upcoming feature which could also include ad revenue share.

It will be interesting to see how YouTube responds to this. At the same time, it’s too early to declare IGTV as a winner in the content creation space yet. Either way, it's great news for content creators who now have two platforms to capitalise on.