The 5.5-metre specimen was uncovered in the Kutch desert in Gujarat in January 2016, but scientists took more than a year to identify the rare fossil. 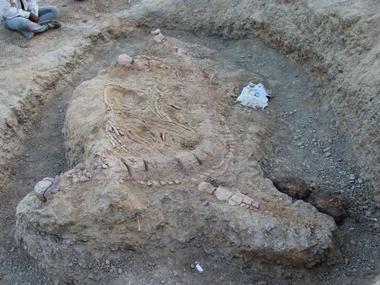 The newfound ichthyosaur skeleton, found outside of the village of Lodai in western Gujarat. National Geographic

The 150-million-year-old marine reptile known as "ichthyosaur" is the first of its kind found in India and was unearthed by a team of local and German geologists.

The 5.5-metre (18 feet) specimen was uncovered in the Kutch desert in Gujarat in January 2016, but scientists took more than a year to identify the rare fossil.

The ichthyosaur — a combination of two Greek words meaning fish and lizard — existed during the Mesozoic Era upwards of 250 million years ago when dinosaurs roamed the earth.

"The fossil was studied for over a year and it turned out to be of ichthyosaur, a kind of marine reptile which could have resembled the present day dolphins," said MG Thakkar, one of the authors of the study.

"This is the first of its kind fossil to be found in India," Thakkar told AFP, adding the fossil was likely to be 150 million years old. Similar specimens have been discovered in the Americas, Australia and Europe.

Gujarat is home to one of the world's largest known deposits of dinosaur remains and is colloquially dubbed India's Jurassic Park after the popular Hollywood film.

In 2003, a National Geographic team discovered a new dinosaur species in the western state after studying fossils found scattered along the Narmada River.

The dinosaur — a 30-foot-long, carnivorous, stocky animal with an unusual crested head — was named "Rajasaurus Narmadensis" meaning the regal reptile from Narmada.

A large dinosaur egg hatchery was also located in Balasinor, a town roughly 90 kilometres (55 miles) south of the state's main city of Ahmedabad.

This groundbreaking ichthyosaur discovery, first announced in the academic PLOS One Journal on 25, could shed light on a possible marine seaway between India and South America when the ancient continents were fused together millions of years ago, experts say.