The Predator arsenal is known for its high end gaming oriented gear, and the latest additions are something to drool over.

Apart from a number of new convertible devices, 360 degree cameras, its thinnest all in one PC and the only 15 inch Chromebook in existence, Acer also updated its Predator lineup of gaming gear at the IFA 2017 in Germany. The Predator arsenal is known for its high end gaming oriented gear, and the latest additions are something to drool over. 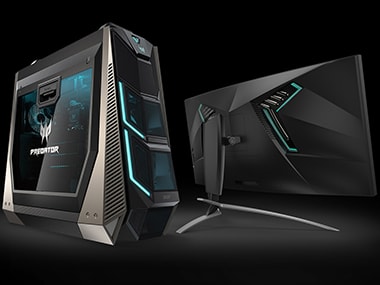 Jeff Lee, General Manager, Stationary Computing, IT Products Business, Acer, said "The Predator Orion 9000 is the most powerful PC we’ve ever made. With 4-way graphics and 18-core processors, it is a platform that takes gamers and intense graphic users beyond their dreams."

The Predator Orion 9000 has a black and silver exterior with RGB lighting strips along the sides of the front bezel. Users can further customise the setup with optional fans with RGB lighting. An opening on the side allows users to peek into the innards of the machine while it is operating. The side panels can be opened up without the use of tools, allowing for easy upgrades.

There are two handles and wheels, allowing for easy relocation of the PC. To keep the temperatures in control during high octane sessions, there is liquid cooling as well as IceTunnel 2.0 airflow management solution. The processor on board is the Intel i9 extreme edition, supported by AMD Radeon RX Vega graphics. Users also have the option of using two NVIDIA GeForce GTX 1080Ti cards in the SLI configuration.

Scott Herkelman, VP and General Manager, Gaming, Radeon Technologies Group, AMD, says, "We are thrilled that Acer has chosen the AMD Radeon RX Vega graphics card for their highest performing PC ever made. RX Vega is a perfect complement to the Predator Orion in terms of both beauty and power. A single RX Vega enables ultra high resolutions and a tear-free, buttery smooth 60 frames per second. And with groundbreaking new features such as the High Bandwidth Cache Controller and Rapid Packed Math, gamers can only expect their system to perform better and better as new titles continue to emerge to take full advantage of them."

Acer also announced the Acer Predator X35, a 35 inch monitor with an aspect ratio of 21:9, an immersive curved display, and a WQHD resolution of 3440 x 1440 pixels. There are 512 zones where the LEDs are dimmed as per requirement. The display promises great contrast with support for both Acer HDR Ultra and Quantum Dot technologies. The monitor has a refresh rate of 200Hz and a response time of 4 ms.

The other devices for the Arsenal lineup are accessories. The Predator Cestus 500 gaming headset has a Biocellulose Driver, supports 7.1 Virtual Surround Sound and comes with a unidirectional microphone. The Predator Galea 500 gaming mouse has adjustable click resistance, with a lifespan of up to 50 million clicks. The RGB lights support 16.8 million colours and 8 lighting patterns. There are five on board profile settings, and 8 programmable buttons. The USB connector is gold plated.