Huawei P20 Pro vs Apple iPhone X vs Xiaomi Mi Mix 2S vs Samsung S9 Plus: 2018 flagships fight it out for the crown

With the launch of new flagships from Xiaomi and Huawei, we feel that it is the right time to compare the P20 Pro and Mi Mix 2S against iPhone X and Galaxy S9 Plus

With each progressing month, more companies are launching updated, 2018 versions of their flagship devices. Xiaomi and Huawei, two major Chinese smartphone makers launched their flagships, the Xiaomi Mi Mix 2s and the Huawei P20 Pro in the market yesterday. Both the devices now join the existing Samsung Galaxy S9 Plus to compete for the throne of the best smartphone in the market. 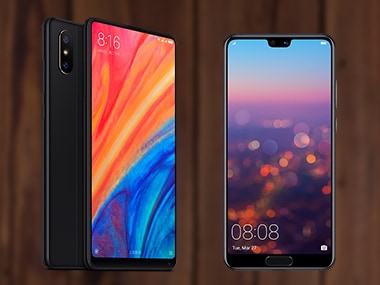 Talking about the latest flagship devices in the market, Huawei P20 Pro comes with a 6.1-inch AMOLED display with a resolution of 1080 x 2240p and an 18.5:9 aspect ratio. It also gets Huawei's Hisilicon Kirin 970 chipset along with 6 GB RAM and 128 GB of internal storage along with a 4,000 mAh battery.

The company has focused heavily on the camera when it comes to P20 Pro as it now comes with a triple rear camera setup, which includes a 40 MP f/1.7 primary sensor, a 20 MP secondary and an 8 MP sensor. The camera optics on the phone have also been made in collaboration by Leica so its gets the 'Leica' branding on the back. The Pro also gets a 24 MP f/2.0 front-facing camera for selfies and it will also be available in four colours — Midnight Blue, Graphite Black, Pink Gold and Twilight. Moving to the entry by Xiaomi, the company has packed a Qualcomm Snapdragon 845 SoC with an octa-core CPU clocked at up to 2.8 GHz and Adreno 630 GPU for graphics-intensive tasks. The phone will come in three variants with 6 GB RAM and 64 GB storage, 6 GB RAM and 128 GB storage and 8 GB RAM and 256 GB storage. It comes with a 6-inch display with 18:9 aspect ratio and FHD+ resolution with a pixel density of 403 PPI. The company has thankfully not opted for a display design with a notch unlike the iPhone X and other Android devices such as the recently launched Vivo V9 and the Oppo F7. With the launch of two flagships in just about a matter of hours, it seems like a ripe time to bring them to the comparison table and see how these devices stack against each other and against the competition. Unlike the last comparison of flagship devices, most of the devices in the list are updated flagships giving us a comprehensive picture of the comparison. So, we selected Apple iPhone X, and Samsung Galaxy S9 Plus to be compared against the Huawei P20 Pro and the Xiaomi Mi Mix 2s. The reason for selecting the iPhone X is because most of the companies including Huawei and Xiaomi compared their flagships against the X. The reason we selected these smartphones is that almost all of the devices are flagship devices sold as the best a particular company can sell. These devices also pack similar (or the custom-made equivalents) of the top-of-the-line hardware.

Bear in mind that we're still not done testing some of these smartphones, so we're currently comparing them going only by their specifications on paper.

There is intense competition when it comes to the on-paper hardware specifications of the devices. But on close inspection, it feels like the Huawei P20 Pro along with the three camera setup on the back of the device seems to be the winner in terms of the camera hardware. The top end variants of Xiaomi Mi Mix 2s seem to be upping the P20 Pro in terms of RAM, the design and the Bluetooth technology in the device. The pricing of the Mi Mix 2S and the P20 Pro in the Indian market is not available at the moment so we can't comment on that. But we will reserve our verdict till we actually test the new flagships. Till then, the Huawei P20 Pro and Xiaomi Mi Mix 2s are evenly matched in a fierce competition.