HP Omen 15-ek0019TX review: This plain-Jane gaming laptop may not be a looker, but it’s priced right and it does get the job done

After spending weeks with ASUS’ fantastic ROG line of gaming laptops, the HP Omen 15 feels a little too plain and boxy. It’s all angles and edges, even the logo, which is just a square piece of reflective plastic. On opening it up, the laptop’s interior isn’t any less plain. The edges of the palm rest are sharp, the keyboard backlight is colourful, but also plain. The keyboard is, in fact, so featureless and plain that it took me several seconds to figure out where the power button was. 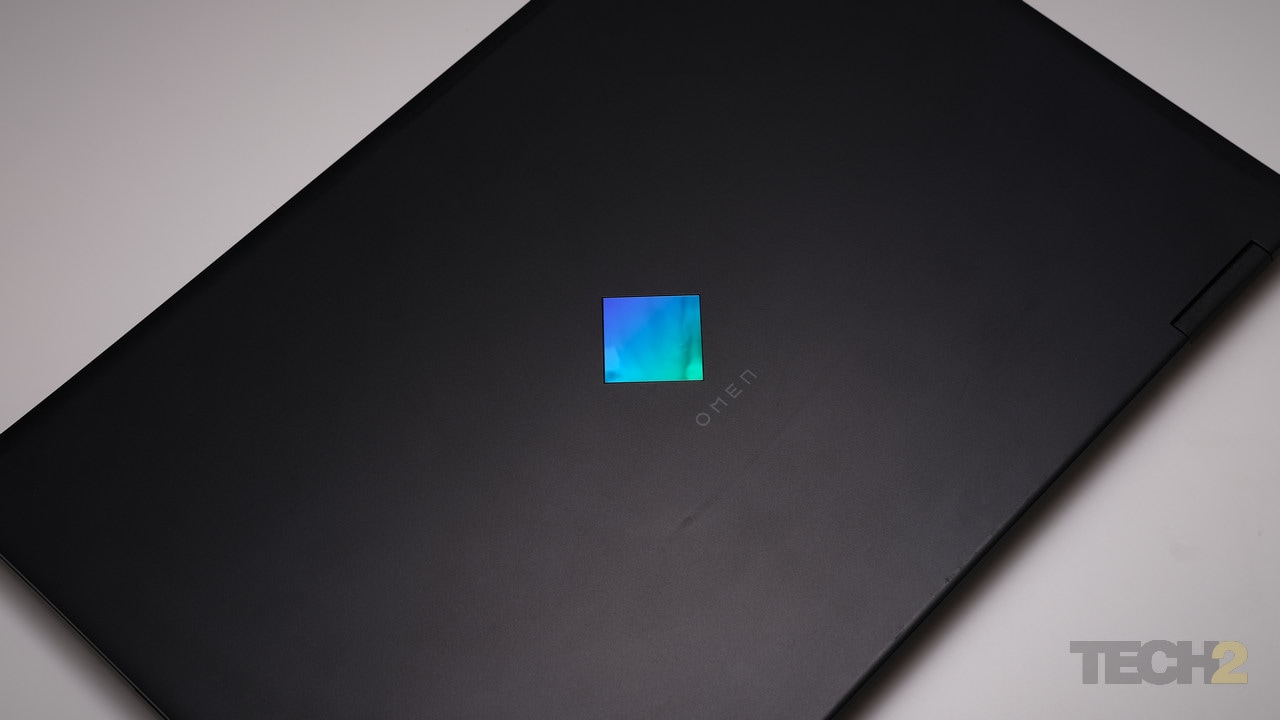 That square logo on the back is quite tacky. Image: Anirudh Regidi

What I’m trying to say is: this laptop is very plain.

This plainness extends to the RGB backlit keyboard, the feel of the keys, and even the bundled system management software, which literally has no flair to speak of. The latter’s design is functional, but very plain. There are no animations, no transitions between tabs, nothing. Rather than have an organic, per-key LED backlight, the Omen’s keyboard backlight is split into four distinct zones. Image: Anirudh Regidi

The keyboard is RGB backlit, yes, but the backlight is split into four distinct zones: three broad swathes of colour and one WASD zone to highlight the movement keys. There’s no auto brightness control, or rainbow effect, or gradation. You just get four solid blocks of colour that you can tweak.

There’s also something off about the keyboard. Normally, my fingers just kind of naturally adapt to a laptop’s keyboard layout. On the Omen, they just didn’t. I was constantly mistyping letters, pressing Shift instead of Enter, and more. I got used to the layout in the end of course, but it took a little while. 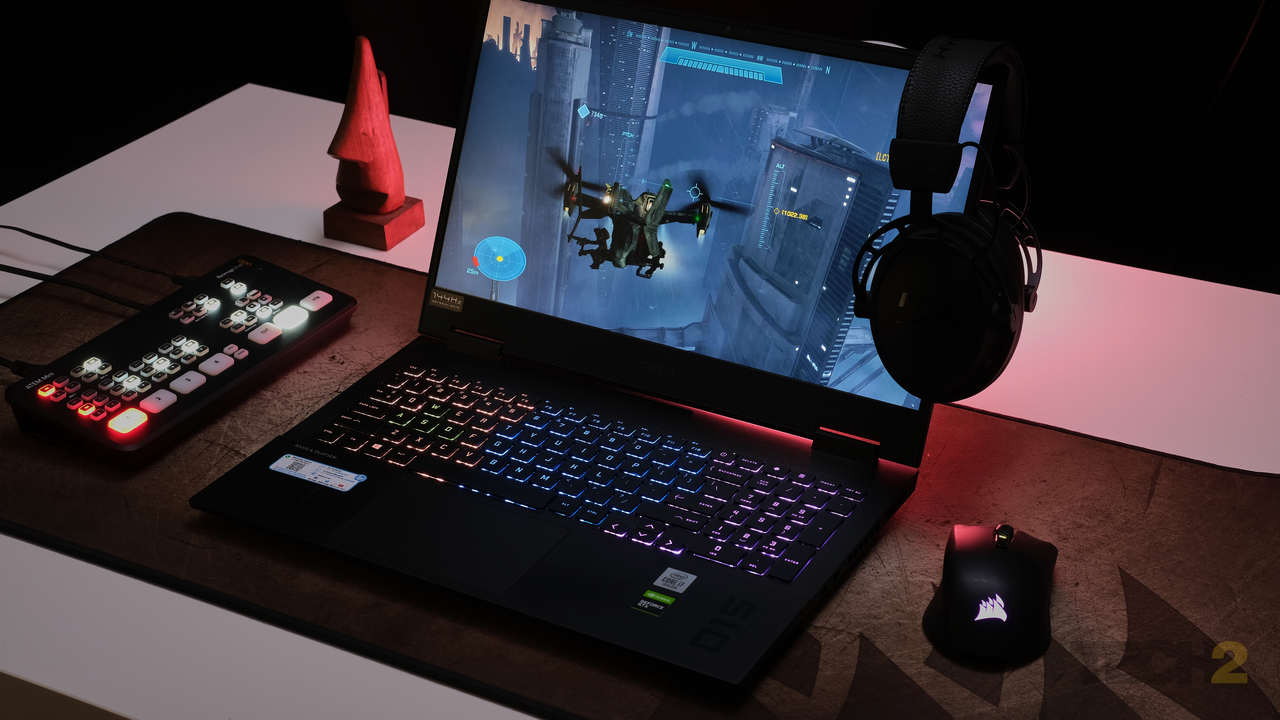 If you can look past the plain design, the Omen 15 is quite a decent laptop. It’s a bit on the expensive side, but it does come with a great display, excellent cooling, and good speakers. Image: Anirudh Regidi

It might seem odd that I’m talking about the feel of the laptop before I discuss specs or performance, but this is what hits you when you pick up the machine. It just looks and feels so… plain.

And speaking of specs, they aren’t really that special either. The unit I’m reviewing, specifically the HP Omen 15-ek0019TX, comes with an Intel Core i7-10750H CPU, 16 GB RAM, a 1 TB SSD, and an Nvidia GeForce 1650 Ti GPU. The CPU is quite powerful, but the GPU is one of the cheapest mobile GPUs that qualifies as a gaming GPU. 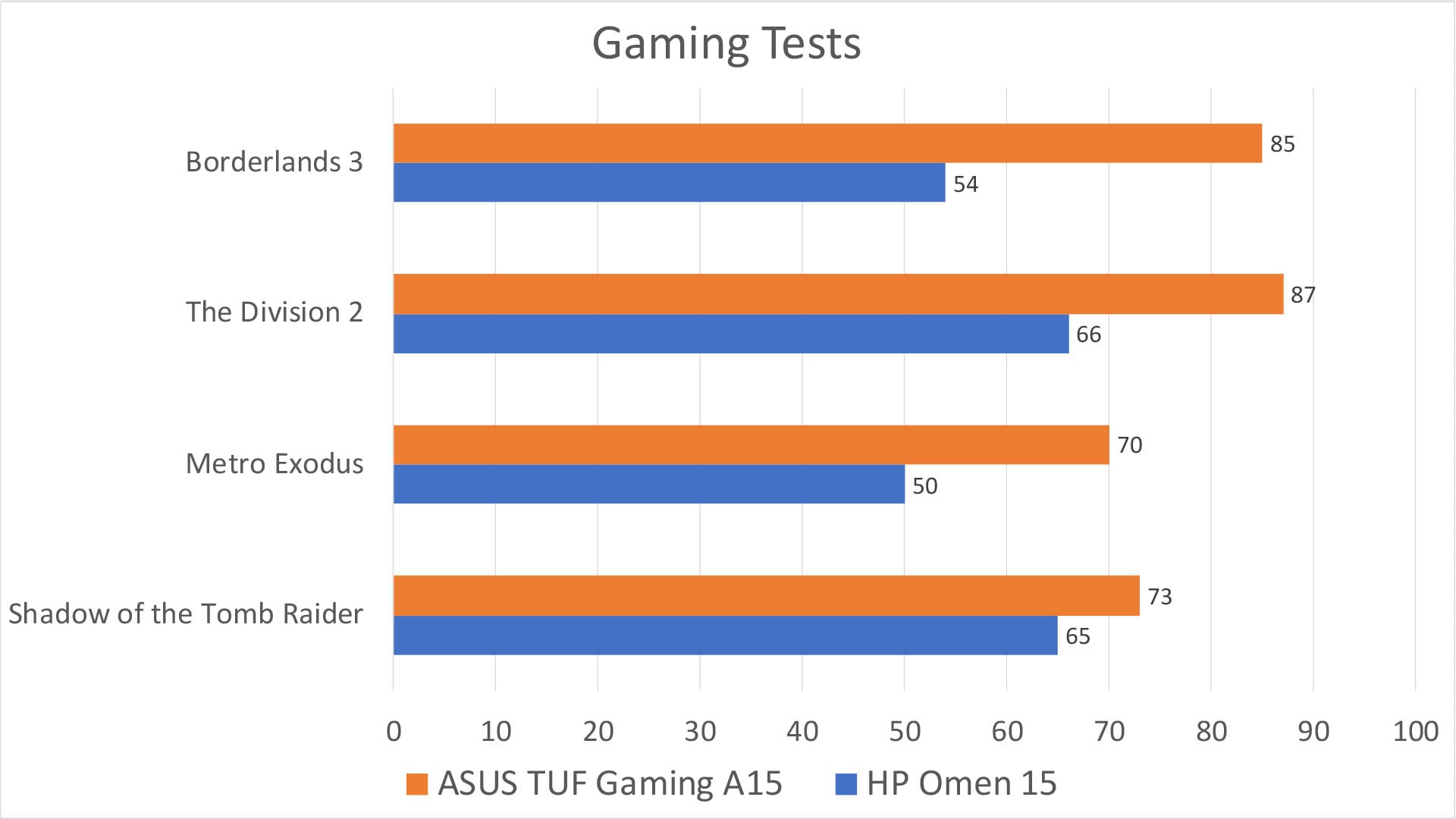 The ASUS A15 is about 25k cheaper than the Omen 15, and quite a bit more powerful, as you can see. The Omen makes up for this with a much better display and speaker set, which I think matters a great deal more, even when gaming.

Looking at my test scores, hardly anything stands out. You get 65 fps in Shadow of the Tomb Raider at medium settings, 50 fps in Metro Exodus using the ‘Normal’ preset, 66 fps at Medium settings in The Division 2, 53 at medium in Borderlands 3, and a respectable 78 fps at Normal settings in Modern Warfare. These are middling results. 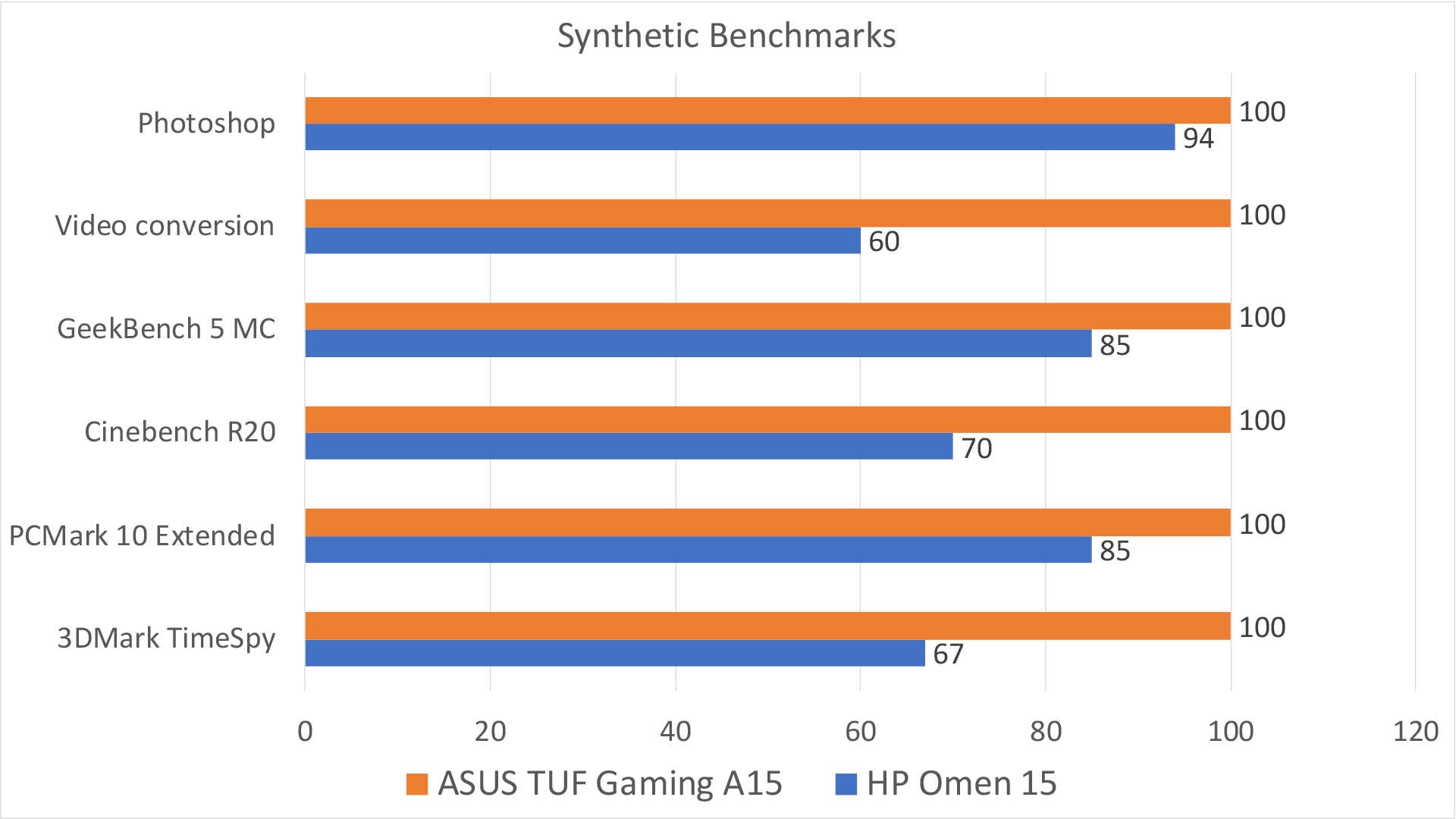 The A15 in this comparison features a Ryzen 7 CPU. HP offers a Ryzen CPU as well, and it’s much cheaper than the Intel one.

The video transcoding and code compile tests both took about half an hour, which is, again, about average.

Overall, performance is, you guessed it, average. You can game of course, but you’ll have to lower settings to medium or normal to manage a playable 50-60 fps.

Three things do stand out, however.

I’d lean more towards the ASUS G14 line for aesthetic flair and performance, but those laptops also tend to run exceptionally hot, which can be a problem for longer gaming sessions. Lenovo’s Legion laptops are also a great alternative, but they’re only slightly less plain than the Omen is. MSI’s budget laptops, and the ASUS TUF line, are cheaper and offer similar configs for about 20k-30k less, but the displays they offer are quite terrible and I’d avoid those models if I can.

If you are getting this laptop, the only recommendation I do have is that you ditch the Intel CPUs and get the AMD configs instead. This i7, 1650 Ti model costs Rs 1.21 lakh. An AMD model with a more powerful CPU and far more capable RTX 2060 GPU can be had for just Rs 3,000 more.