The ASUS ROG Zephyrus Duo isn’t perfect, but if I had to pick a single laptop that I’d have to spend the rest of my days with, it’d be the Duo.

I’m sold. I want dual screens on all my gaming laptops.

For any power user, and especially a gamer, a multi-monitor setup is the holy grail, an enduring dream that they hope will one day be their reality. That’s the dream that ASUS has turned into a reality.

Two screens translate to twice the productivity, or fun. Well, maybe not a 2x improvement, but it is an improvement. With two screens, you could… The Zephyrus Duo is one of the most impressive laptops I’ve used this year. It’s interesting, well put together, and fun to use. It’s also sleek, elegant, and very powerful. Image: Anirudh Regidi

And you’re getting all this goodness in one of the most powerful gaming laptops you can buy today, in a chassis that weighs under 2.5 kg, and is slim enough to toss into a small(-ish) backpack.

This is the ASUS ROG Zephyrus Duo 15. And I love it.

It’s not perfect, and it has some nagging flaws, but if there was only one laptop I could have this year, it would be this one.

Specs: Your money’s worth

When it came to speccing out this beast, ASUS didn’t hold back.

Where do I even start?

GPU: Nvidia GeForce RTX 2070 Super Max-Q (one of the fastest mobile GPUs you can get)

Besides the above, you also get:

Externally, the Duo looks like a regular laptop. Open it up, however, and things are different.

A secondary screen hinges towards you (by about 13°, according to ASUS) and lights up. The trackpad and keyboard, you notice, have been shoved towards the bottom, so there’s no palm rest. There’s also no numpad but the trackpad can double as one — yes, the trackpad. And there’s no webcam. 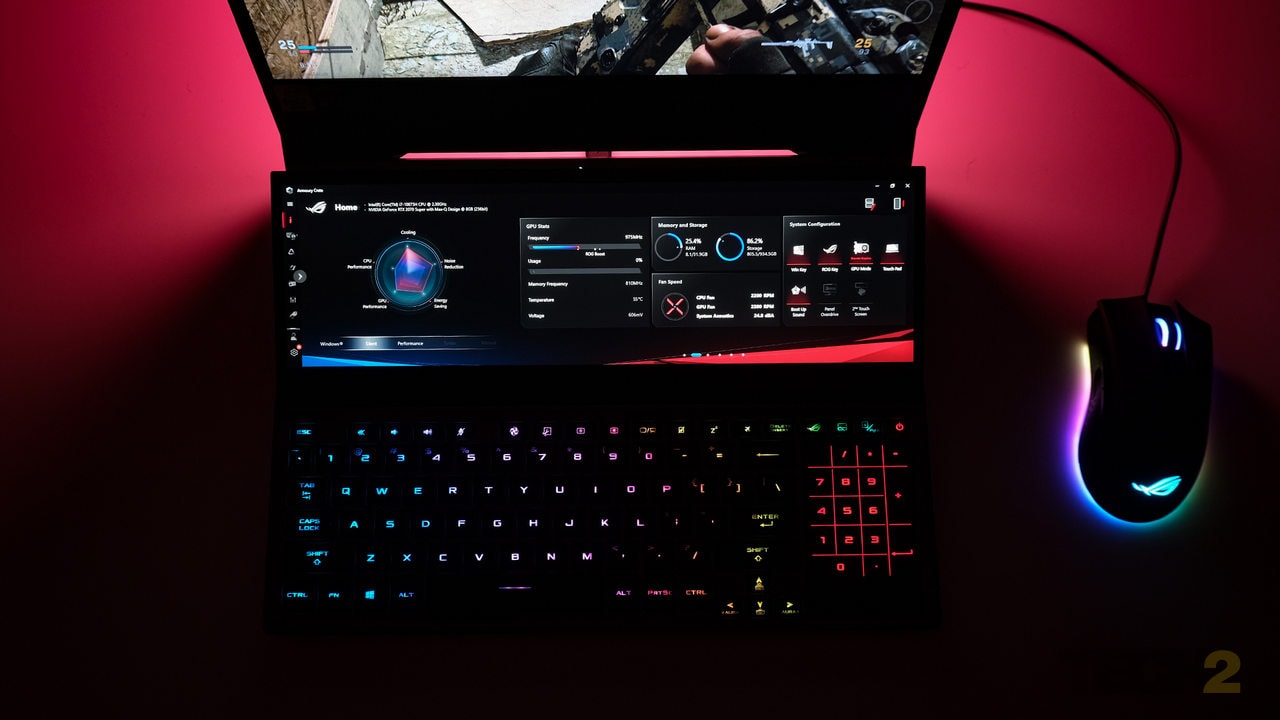 That dual-screen might seem like a gimmick, but only till you use it. It can be incredibly useful, once you figure out how to best take advantage of it. It’s also nice that the TouchPad doubles as a NumPad. Image: Anirudh Regidi

To be honest, that kb/trackpad positioning is a bit of a pain, literally, if you’re not careful about ergonomics.

Because there’s no palm rest, you can’t use this laptop comfortably on your lap or in cramped spaces. That means no cabs or economy class airline seats (not that we’re travelling much during COVID, but still…). Even on a table, it’s best to place the laptop several inches away from the edge so your wrist doesn’t get put under too much stress. Oh, and you really should use that bundled palm rest.

But let’s get back to that second display (called ScreenPad Plus).

It’s as wide as the laptop, and half as tall. The resolution also matches the main display at either its native 3840x1100 mode or 2x scaled 1920x1100 mode, depending on the display your laptop is configured with. It’s also touch-sensitive.

It’s important to note here that unlike Apple’s TouchBar, the ScreenPad isn’t a discrete control panel, it is, quite simply, a secondary display. If you open up your Windows 10 display settings menu, you’ll see it register as a second screen.

This is both good and bad.

The good is that you get all the benefits and flexibility of a dual-screen system, which include all the functionality I mentioned earlier. When gaming, it’s nice to have stats and strategy guides open on that secondary screen. When editing video, I can’t tell you how convenient it is to have, say, your library or timeline at the bottom while editing on the primary display. 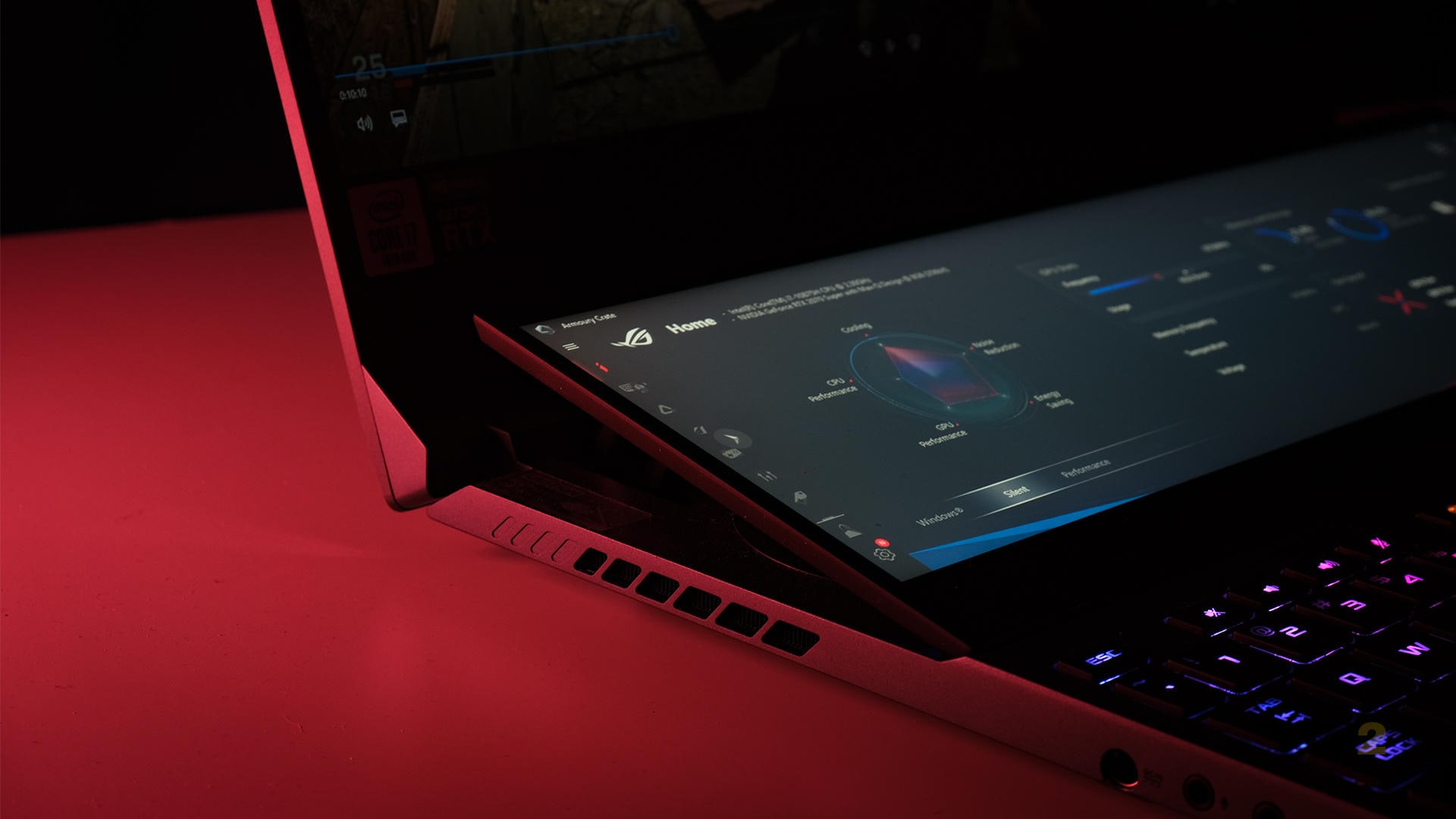 The secondary display is raised by about 13 degrees. This provides a decent enough viewing angle if you’re sitting close to the laptop. The hinge is also very sturdy and the display won’t break so easily if you accidentally leave a cable trapped underneath. Image: Anirudh Regidi

For a nerd like me, that display is especially useful for keeping a close eye on system stats, like temperature and clock speeds, something that also makes my job as a reviewer much easier.

The bad, however, is that you also suffer from the pitfalls of using a dual-screen system. Apps on the second screen will revert to the main screen when you close and open the lid. Any input on the second screen will draw focus from the primary display, which means that if you’re gaming, you can’t, say, scroll through a strategy guide on the bottom screen without the game losing focus and being relegated to the background. This is also an issue when streaming, where you can’t adjust settings on the fly while you’re gaming. You can, in other words, only interact with one display at a time. Despite packing in a slower GPU than on the S15, the Duo’s better cooling allows its 2070 Super Max-Q GPU to stretch its legs a bit more, making up for the performance deficit in most cases. (Data in frames per second). Image: Anirudh Regidi

ASUS’ bundled software does mitigate some of these issues by including a customisable quick launcher and several other features, including the ability to disable touch input to prevent accidental touches from ruining your game. It’s still not enough, however, and the display just doesn’t feel as tightly integrated as something like Apple’s TouchBar.

The ScreenPad also suffers from poor viewing angles, and there’s a tonne of backlight bleed, making it a little less useful than you’d realise. I also tried with the display tilted forward by 45 degrees instead of 13. The Zephyrus S15 should, on paper, be 10-15% faster than the Duo. As you can see, this isn’t always the case. (Data in percentage). Image: Anirudh Regidi

One last gripe is that I wish the primary display was a lot brighter. 200 nits is fine for dimly-lit rooms, but if you’re editing images or video, or even watching movies, you’d want something brighter.

As a geek and gamer who loves looking at graphs and numbers while doing anything, I still love the ScreenPad and would, any day, opt for the Duo over a regular gaming laptop like the S15, but I don’t think that display is for everyone, especially with the ergonomic limitations it imposes on your ability to use the device as a regular laptop.

Despite its usefulness, I still think it’s a niche feature that will only appeal to a small section of the audience.

Performance: All you could ask for

The performance of the Duo surprised me. On paper, it’s slower than the S15 I’d recently reviewed. While the rest of the specs are the same, my review unit of the Duo came with an RTX 2070 Super Max-Q GPU vs the 2080 Super Max-Q one in its sibling. Given that everything else was the same, I expected the Duo to be about 10-15% behind in performance.

The opposite is what I observed.

In gaming tests, the Duo either performs at par, or up to 15% better than the better specced S15. It does, strangely, fall behind in CPU-limited benchmarks, but it’s the gaming results that matter most anyway.

It turns out that the increased airflow afforded by the raised display has something to do with this bump in performance. The S15 raises its chassis to improve airflow, but the ScreenPad on the Duo lifts up to a much higher degree than the S15’s chassis does, vastly improving airflow.

The net result is better thermal headroom for the GPU, which allows it to stretch its legs a lot more than the thermally limited 2080 Super Max-Q can on the S15.

In games, the Duo can easily guarantee 60+ fps at Ultra settings, even in RTX titles like Metro Exodus and Shadow of the Tomb Raider.

In esports titles like CS: GO and DOTA, expect to see 300-400 fps. In competitive shooters like Modern Warfare, you can extract close to 200 fps if you tone settings down to Normal and disable RTX. On the Duo’s 300 Hz, 3 ms, colour-accurate FHD display, this is perfect.

I feel a lot more competitive on this Duo than I do even on my (fairly high-end) desktop PC, and only because of the display.

As with the S15 (read all about it here), the 300 Hz refresh rate doesn’t seem that revolutionary till you’re deprived of it. Though, again, I do wish the screen was a lot brighter:

In productivity tasks, such as video or photo editing, the benchmarks show that the Duo is a bit slower than the S15. In practice, the difference is so slight as to not matter.

You’re getting superlative performance here, in a device that looks and feels little different from any 14-inch Ultrabook out there. That’s a huge achievement.

Oh, and lest I forget, battery life isn’t very good, and I’m sure that secondary display isn’t helping things any. In regular use, with both displays in use, I saw on average about 2-3 hrs of battery life. This does improve slightly if you only watch video and disable the second screen, say, but that’s not really how this device is meant to be used in the first place.

The Duo can charge via the bundled 240 W proprietary charger, or, in a pinch, via USB-C, but it’ll only draw 65 W and will not operate in its max performance regime.

Note: You can read more about the Duo’s Liquid Metal cooling system in the S15 review. They both share the same cooling hardware and it’s only the size of the vents that differs.

The ASUS ROG Zephyrus Duo isn’t perfect, but if I had to pick a single laptop that I’d have to spend the rest of my days with, it’d be the Duo.  That still doesn’t mean that this is a device for everyone, however. Ergonomics are a concern, and unless you have clear plans for that second screen, I wouldn’t recommend it.

For most, those with deep enough pockets to consider the Duo anyway, a premium gaming Ultrabook like the Zephyrus S15 is just right. For the nerdy gamers, streamers, and editors out there who fully understand the strengths and limitations of Windows’ flawed multi-screen interface, the Duo is fantastic.